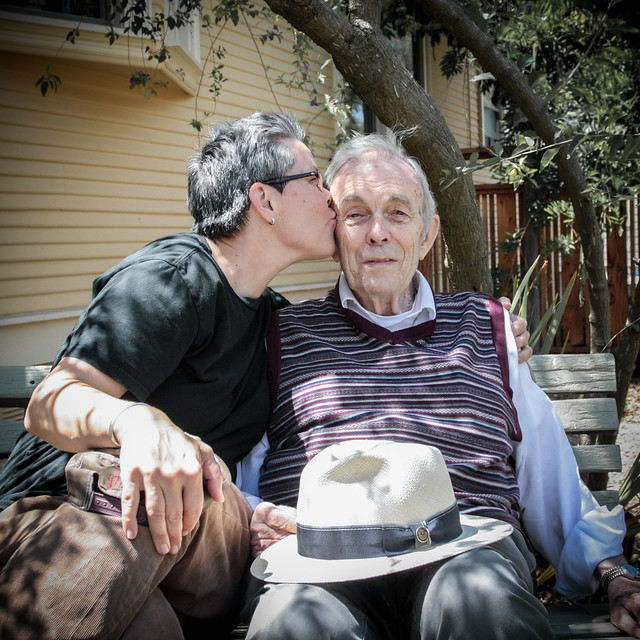 “Still here” meaning both the author of this blog (quieter of late), and my pops (even more quiet of late). The photo above was taken a year ago today. My pops has aged a lot over this past year, more so in the past six months. Still more so, it seems, in the past six weeks. During this, his 92nd year here, time is speeding up all around him, and taking its toll.

But today, I am grateful to be able to say, we can still thank him directly for his loving presence, his affection for people, his inherent generosity, his sincere desire to make those around him smile. So after breakfast and home-made kid gifts in bed, we’re off to see him, whether or not he sees much of us.

He and I (and those others who love him and care for him) are entering that now-familiar zone in which we begin to communicate more nonverbally than verbally. My firey baptism into this zone was my mother’s pre-death coma, a ten-day period marked at is beginning by our discovery, only then, that it was a metastasis of her breast cancer and she had very little time left. I returned to it again about a dozen years later with the boy who was her first grandchild (as each of them, unmet by her). I begin to convince myself now that in spite of the fact that I can’t tell whether my pops can’t hear me or that he can’t understand me, we have forged sufficient mutual comprehension over a half-century of loving to carry our relationship forward into the inexorable, ineffable next place.

Last night, looking through my many photographs of him, my Apple iPhoto face-recognition feature gave me the option of identifying his visage in my ginormous, 5,000+ store of images, and over and over again it thought I was him. Fitting, I thought, because I do think he has often seen himself in me, we each of us at about the same distance from that middle point of the gender spectrum, him in his gentlemanly male body on one side of the midpoint, and I in my gentlemanly female body on the other. When we have been together (never as frequently as I’d like, the miles and care-dependent kids and work hours a mighty barrier), I think we each have been fed in a similar way.  We both hit a milestone when, years ago, I said to him: “Pops, I’m the son you never had,” and he replied, “Doll, you’re the son I did have.” I have shared that before here, and I’m certain I will again. It is worth the repetition so that a random new pair of eyeballs can see: this degree of human growth is possible within one lifetime. Parental love can drive it.

I’ve missed him more and more lately, because there has been more and more of him to miss. Even as, paradoxically, some wisp of truth, however unlikely, persists. The other day, when I left his place, he said to the kind attendant who would be there with him for the night, “There he goes.”

Past Baba’s Day posts at LD