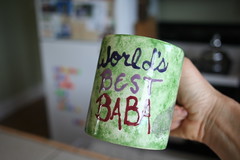 Father’s Day is an important day in my family, certainly, because my partner and I both love and are deeply indebted to our fathers. After all, it was my Pops who taught me how to dance, how to banter, how to charm the ladies — and how to be an optimist. But when we celebrate our own generation, Father’s Day is important for different reasons than you’d find in a two-parent, hetero one. Fathers are always present, even in their absence, and more so for us who, by eschewing men as significant others, raise a few more eyebrows — or hackles — than do straight single mothers by choice.

Lesbian families are walking paternity questions, in a way. We ask each other “Who’s the daddy?” all the time, though it’s usually more like “Who’s the donor?” We ask because the answer to the who question entails a big how answer, and how we got to our parenthood is a big deal for most of us. When others who aren’t queer ask me the paternity questions (usually with the graciousness that accompanies questions that are, after all, good-naturedly voyeruistic) I, for one, answer with the cheery, practiced diplomacy of a museum docent. And with no resentment. I get it that that’s what I am at this point in the history of the American family: docent to the early 21st century lesbian wing of it, and it behooves me to enlighten everyone who shares my child’s world.

Father’s Day is important to my partner and me because we couldn’t have done this alone, couldn’t have graduated from “relationship” (the two of us) to “family” (the three of us and counting) if it weren’t for the generosity of a man we know and now most certainly love. So on Father’s Day we thank him — but not for being the father of our kid; he’s plenty occupied with his own two delightful daughters. We thank him, rather, for enabling me to do so. Be the father of our kid, that is. Because in our family, on Father’s Day, we celebrate me.

Oh, I share some paternity with our donor. His “fatherhood” is strictly biological, though, and while its impact is life-long, in the genetic memory of our child, the work he put into it was relatively modest. My “fatherhood” of our child is strictly social, invisible to the state until petitioned for as a would-be “second parent,” and marginally visible to many even afterwards. But it is the result of an accretion of daily work on my part, ever-changing and, I pray, lasting my entire life. The older our daughter gets, the more I’ll learn about what my sort of lesbian fatherhood means, to me and to her. Right now, it’s not so complicated.

Right now, I’m simpy “Baba,” a term or diminutive for father borrowed from at least a half-dozen other languages. When my partner and I read with her, we randomly alternate between Baba and Papa when we name what’s written as the father (though, blessedly, Grace Lin has a written and illustrated a series of books depicting a Chinese American family that uses the Chinese word “Baba” for the Dad; needless to say we have ’em all). Precocious little monkey that she is, our daughter will soon be able to notice that “Daddy” is what’s written in most books, not Baba. At that point we’ll have choice number one, of the dozens and dozens we’ll face in the Baba vs. Papa pantheon. We could simply stop checking out books from the library and only buy our own, which we’d mug on the way home from the bookstore and hastily graffiti with “Baba” all over the “Dad” parts. As time and circumstances permit, we might even keep a packet of those little electronic labeller printouts handy. Armed with scores of pre-printed “Babas,” we could affix the proper term neatly on any printed surface, whenever needed.

But who knows how much we’ll really need it? I’ve found that kids are far less derailed than we grown-ups are by the inter-gendered truths that they experience. At least the kids who know me all understand that Baba means “parent midway between Mother and Father.” I overheard my youngest nephew correct his dad when he heard him referring to the child of the two lesbian parents across the street. His dad said something to the effect of Norrie having “two moms,” to which Clayton immediately demured, “No, Daddy; Norrie has a Mama and a Baba.” Which happens to be true; Norrie calls Angela “Baba.” My brother-in-law smiled right away and said, “You’re right, Clayton. I stand corrected.”

In fact, Clayton, who is six, asked just a few weeks ago what will we do for Father’s Day. I got to beta test my Father’s Day spiel. Here we are in front of the dirama, here I am with arm extended, palm up, in the direction of the display. “Well, Clayton,” I said, “in our family we celebrate Baba’s Day on Father’s Day. In fact,” I hazarded, getting a little carried away with myself, “it’s internationally celebrated as Baba’s Day, for parents like me.” I paused to consider the impact of yet another, fairly typical bald-faced exaggeration, as he gave me that sweet, open, “Really?” look. “Okay, well, not yet. But one day maybe. And for now, at least in our family.” And that’s true. One family at a time, one year at a time. Nearly a hundred years ago, in Spokane, Washington, that’s how Father’s Day began. I’m patient.

We really are family