Another bulletin for the “More grist for the mill” file. Â The National Organization forÂ Marriage hasÂ amplified their claimÂ that marriage equality somehow quashes, instead of clears the path for, true religious freedom. Â Gotta fix that.Â Pro marriage equality churches CANNOT LEGALLY WED WHO THEY WANT TO when same-sex marriage is outlawed. Â That, folks, is a limit on the free exercise of Â religious freedom. Â How many churches might those be? Read on! [later note, heaping on yet more grist for the mill: a Religion Dispatches article of May 5 (via AlterNet) notes rising secularist numbers: “40 Â Million Nonbelievers in America? The Secret is Almost Out”]

This gay marriage = religious freedom argument was floating around in my head for a while (probably since I got trained for election day No on 8 work at a United Church of Christ church, or was fed election-day donuts there). Â But it did not become vivid until I saw Rob Tish’s crisp, concise video presentation of the argument thatÂ Â “Gay Marriage = Religious Freedom.”Â Â If you haven’t seen it yet, do: you won’t be disappointed.Â Â (Those of you who are reading this post in a reader aren’t party to the feverish happenings in this blog’s sidebar; some do read it in situ, but might not have seen: I it posted it in my “Selected Videos” slot in the sidebar a week or two back.) Â Here you go:

The short version of the above: (1) Each argument that religious freedoms would be limited by marriage equality? False, proved so by a point-by-point examination of them (for further corroboration, considerÂ five years’ experience in Massachusetts, testified to by clergy). Â Faiths that do not recognize or support same-sex marriage are free to continue to not marry members of the same sex. Â And (2) Pro-marriage equality churches cannot marry who their faith tells them they should when same-sex marriage is outlawed. Â That is the limit on religious freedom.

Courage Campaign Â just released a citizen-made video reiterating the same point: the separation of church and state protects religious freedom; marriage equality and religious freedom are not in conflict.

And in “Same Sex Marriage is Inevitable,” a commentary earlier this week at Forbes.com, pollster Bernard Whitman reminds readers,

Religions have plenty of prohibitions against actions that are perfectly legal in our society, including working on the Sabbath, eating shellfish, drinking alcohol or coffee or celebrating Halloween. Would anyone think to suggest that these activities be preventedÂ by lawÂ simply because some people’s religions are opposed? Of course not.

And while religions certainly have rules that married couples are supposed to follow, it is the state that decides who may get married and who may not, when marriages begin and end, and what rights, benefits and privileges are awarded to married people.

I note these things not so much because I think any of you highly astute LD readers are laboring under essential misconceptions about such matters, but to provide you a bit more material from which to draw as you have your various water-cooler/ dinner table conversations with friends, colleagues, and family members. Â Since that’s how this whole shebang is going to move.

And generally speaking, anyone watching the polling these days Â knows that movement on this topic is actually coming along at a rapid clip. Â Both the Washington Post/ABC and the New York Times/CBS have recently released polls showing sharp upticks of support for gay marriage: Â The Post/ABC poll just asked pro/con for same sex marraige, and came up: 49% for, 46% against. Â Got that? More for than against. (ABC coverage on it, with graph, here.) The NYT/CBS poll factored in support for civil unions as well, and still came up with more for gay marriage than any other option:Â Times/CBS: 42% for same-sex marriage, 25% for civil unions, 28% for no legal recognition.

Seeing Rob Tish’s video a few weeks back got my own curiosity about pro-marriage equality churches to its logical next step, and I rooted around for more numbers. Â I haven’t yet turned up a head count of US congregations, but The Pew Forum on Religion and Public Life reported on various denominations’ positions on same sex marriage in May of 2008. I’ve poured a synopsis of it in a home-spun table, below; for more info do look at the report itself, since it provides links to each of the denominations’ own publications on the topic. Â [Full disclosure: I am a heathen (okay, okay; I’m a Buddhist) and do not pretend to a more nuanced command of the topic than I found on this Pew overview. I know a couple of you LD readers are lesbian clergy Â (yay!)Â and Jewish scholars (yay!), and may be inspired to focus this picture even further for interested readers. Plus there’s this “Learn More” section of Freedom to Marry’s “Why Marriage Matters to Religious People and Communities” page.]Â

By my count, out of all these denominations, only around half are explicitly anti-gay marriage. The rest are either for it, or not explicitly against it, or even, in several cases, in the throes of significant internal turmoil over an evolving redefinition of their position. Â I could add up the numbers of congregants in these open and affirming (or at least not clearly closed and denouncing) denominations, but what would that matter? Isn’t protection of religious minorities one of the bedrock tenets of this nation?

Â [Data for the above table adapted from The Pew Forum on Religion & Public Life’sÂ Special Report: The Same-Sex Marriage Debate — Religious Groups’ Official Positions on Same-Sex Marriage, revised May 20, 2008.]

* B.A. Robinson notes, In “The Episcopal Church, USA and homosexuality” at Religious Tolerance.org, that “the Episcopal Church (USA), along with the Presbyterian Church (USA) and the United Methodist Church are probably experiencing the greatest amount of conflict over the questions of equal rights for their gay and lesbian members.”Â

If you’re still reading this lengthy, patchwork post, you may be wondering: What specific good works are afoot right now to strengthen and support the work of these open and affirming congregations, since the California Supreme Court decision on Proposition 8 is going to hit us like a big huge smelly fish in the face (!) any week now?Â

Reader, wonder no more! Equality California’s Coalitions Coordinator Andrea Shorter (score, EQCA!) has been hard at work fostering discussion among various faith leaders, and in “In Good Faith: Moving Towards Marriage Equality,” a post today at Equality California’s blog, Shorter conveys some of that dialog. Â It’s rich, and very heartening. Â Go read it. Â And if you’re local to the San Francisco Bay Area, know that the Bay Area Coalition of Welcoming Congregations is engaged as you read these very words in planning a concerted response to the court’s decision (dates and locations here).

Alrighty then! Â Enough words for one post, and, as I’ll clarify tomorrow, for one month. Thanks for reading. To you, and to myself, I say: Stay calm and carry on. 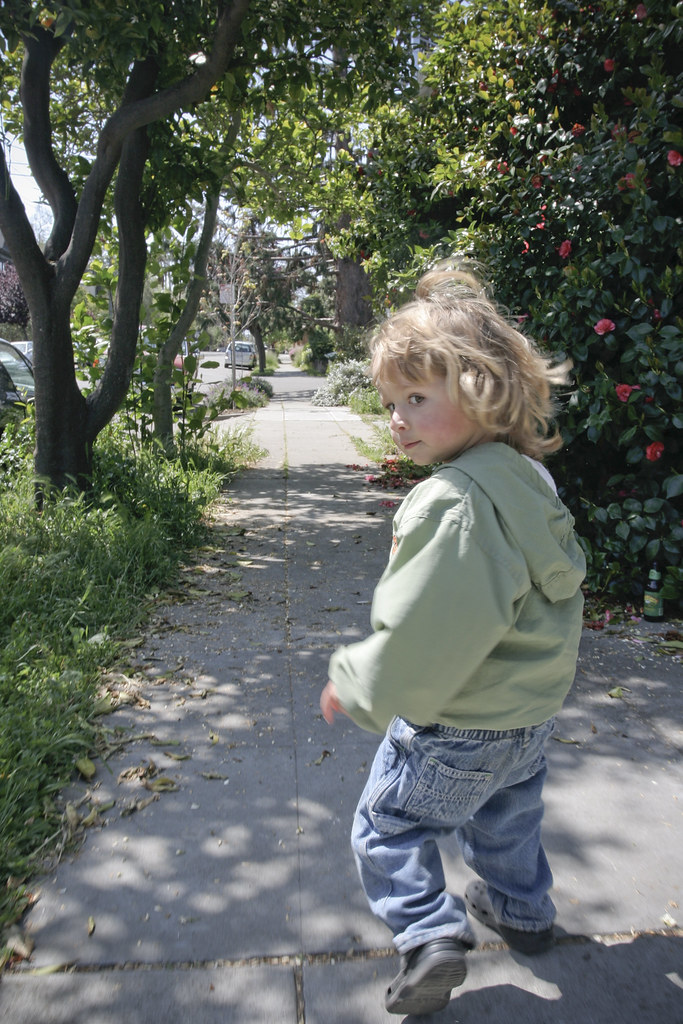 Um, to the ends of the earth? I’m thinking? Or at least as far as I can go. 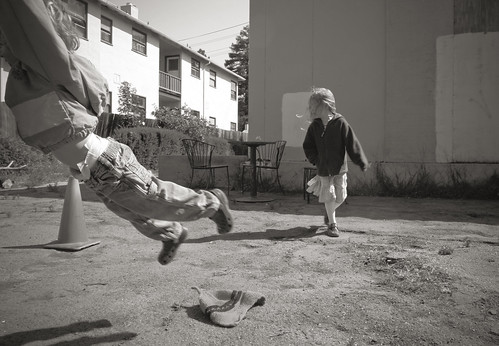 Behind the cafÃ©, Berkeley, CA.

When she was a young woman, my mother lived with her mother in the apartment building pictured in the background, above. Â Berkeley still had its Key Route streetcar system back in the 1930s, and she rode one every day to high school, lugging her violin case on days when she had her lessons.Â

(Want to see what a streetcar ride through town looked like, back about a hundred and two years ago? CheckÂ out this silent film from the American Mutoscope & Biograph Co, June 1906: it’sÂ complete with fracas between the streetcar operators and an uncooperative pedestrian at about two minutes into it. Gotta love that the fight was broken up by, among other people, a lady with a fancy wide-brimmed hat.)

What’s now a corner cafÃ© was once a gas station, perhaps even in my mom’s day. Under the thick overgrowth of trumpet vine are the remnants of art deco styling. Â  Along with the espresso drinks, the place offers up a minimum of pretension, good hot sandwiches (omelettes on weekends), outdoor seating, and friendly folks behind the counter who humor my bad Spanish. No accessible electrical outlets mean that laptop jockeys are outnumbered by the folks reading actual paper pages in books, or talking to friends face-to-face, or tending little ones.

I’d like the place even if I didn’t feel as if my mom were watching us from an upstairs window. 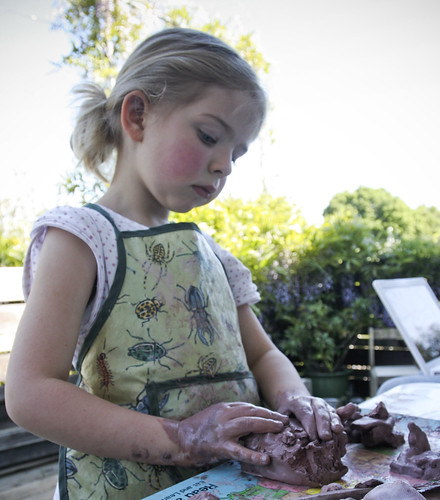 She shares one or two things in common with Mademoiselle Claudel, the famous scupltor. I’m thinking here about the penchant for outbursts, counterbalanced by a clear, vivid focus while at work on art. (If her early years are any indication, though, I have every expectation our gal will lead a much happier life. Which would be a durn good thing.) 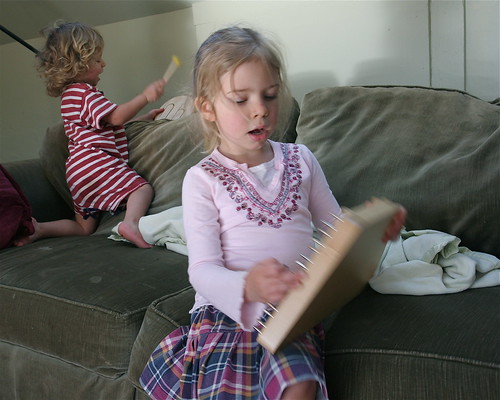 For me personally, basically two ways: kid #1 and kid #2, seen above doing collaborative improv music-making this morning before elder of the kids went off to preschool. Â In a kid-carrier pulled behind a bike. Â We’re trying. Â

Truly, one of the things that irks me the most about all social injustice, everywhere, is that the waging of it, which of course then necessitates the dismantling of it, all redirects vital energy from the very, very pressing matter of keeping the frickin’ planet from collapse in another generation.

So we’re forced to multi-task, while the clock is ticking on the planet. Loudly.

[The relationship between social inequity and environmental degradation, by the way, is a big fatÂ Â given.]