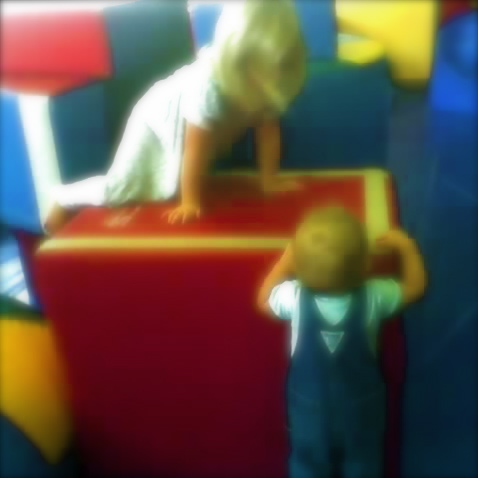 At right, from Mama’s cellphone camera: Sister lords it over the brother at the YMCA’s Kindergym.

First the bad news: I cannot report on it today, because I missed yesterdayâ€™s symposium on the 21st Century Family, hosted by Berkeleyâ€™s Greater Good Science Center. I could blame myself, but Iâ€™d rather blame a cascading series of mishaps that were (it goes without saying) beyond my control.

That cascading series of mishaps were (honestly) triggered by an unholy combination of the following: the addition of a second child to the delicate balance of our household childcare ecosystem; which imbalance is magnified in turn, at least for the time being, by the fact that this childcare ecosystem is managed by two people who both want to (a) pursue meaningful employment outside the for-profit world, ideally in community-based arts and social justice organizations, yet still (b) give meaningful energy to parenthood at the same time, which is not an impossible undertaking, perhaps, except that we find this idealistic path littered with snares and potholes and such by the high cost of living in the San Francisco Bay Area. My hometown, I might add resentfully, which was at one point marginally affordable. Now not so much. And did I mention the ravages of The Menopause? Thatâ€™s got to factor in somewhere. Particularly when things are going awry, which they are wont to do, even under the best of circumstances. For those of you not The Menopause-savvy, the equation goes like this: Things Go Awry leads to Hot Flash leads to Things Going Awryer. Plus also my dog died. Who cares if itâ€™s seven months ago (tomorrow). She marked time with me and unconditionally accepted me for some fourteen years, so she might as well have slipped away yesterday, especially when Things Are Going Awry. Thatâ€™s when you need your dog. I mean, itâ€™s not like stuff like that doesnâ€™t drag behind a gal like a garland of so many spent dog food cans, a kind of mournful variation on the â€œJust Marriedâ€ car decoration.

Oh, the garlands we all drag behind us, sorrow and joy and hardship and perseverance. This is why people weep at beautiful music. The music may have a depth, but if it is done right, what it touches is deeper still. I learned this when I was moved to tears, against my will, while listening to gospel music at a Redwood Records Music Festival, oh, twenty five years ago. That was after my first loss. Each one, at the time, felt like an amputation — love here, love there, then love again — and then I realized they were all rehearsals for the big one, which was my motherâ€™s death. And then, unthinkably, about a dozen years after that, my sister and I discovered that our motherâ€™s death was itself rehearsal for my sisterâ€™s sonâ€™s death. Not in our worst nightmare would we have imagined such a thing.

The good news? Well, the symposium I missed yesterday was videotaped, I learned from the kindly Executive Director of the Greater Good Science Center as we talked in the emptying hall (itâ€™s not like I didnâ€™t haul my sorry arse over there even when I knew Iâ€™d just see people filing out of the room: it was an accomplishment simply to get to the room). Of course the director was kindly. Would you expect any less from a think tank with a name like that? Iâ€™ll post the link to their video, which theyâ€™ll be posting to their website.

The rest of the good news is that I did not miss the symposium because I was with my daughter in the hospital, which a friend was all this week. The Good Book says that â€œall things work together for goodâ€ (to them that love God, is the rest of the phrase). Well I donâ€™t know about god (that makes me an agnostic, which works just fine with the Buddhism), but I do love people, and I hope all things work together for good for my friend and his daughter in New Jersey, and I hope the best for my sisterâ€™s family thirty miles south of me; hell, I even hope the best for my various lost loves, wherever they may be. I can say that my first love and I refound one another as friends, and she was there with us on the eve of my motherâ€™s death, and my nephewâ€™s. If love works like I think it does â€“ like equilibrium — you never really do lose it. You just misplace it for a while.

12 thoughts on “A fit, followed by a fit of optimism”