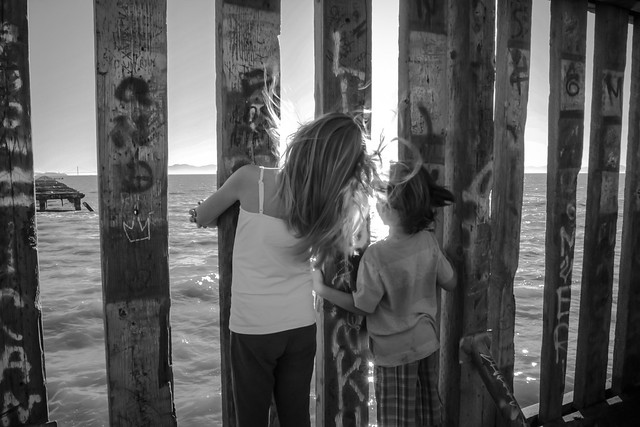 At the end of the pier in the middle of the San Francisco Bay, Berkeley, CA.

On Baba’s Day a week ago, we came back to the Berkeley marina after visiting my Pops. We ended our adventures here, at the terminus of the kilometer-long Berkeley pier. The remnants of the original portion of the pier pick up after a 50 foot gap (to allow passage through of small boats), and point just a little to the south of  the Golden Gate Bridge.

If the Supreme Court makes a big fat pronouncement tomorrow morning about LGBT civil rights, you can be sure that something or another will appear here as soon as I pick myself up from either the ceiling or the floor, depending. (Biting nails about Voting Rights and Affirmative Action rulings, also due out this week.) [UPDATE: No announcement Monday. More decisions on remaining cases will be made Tuesday morning, 10am Eastern; Thursday mornings are also a traditional decision day, but they’re scheduling additional days this week to hand down decisions.]

As per usual, you should also check out what’s up over at Lesbian Family. Last Friday I posted several items of interest, one of which was a short and sweet interview (“A Few Minutes with Zach Wahls, Everly Lesbian Mom’s Dream Son“) and the other provided (or linked to) some helpful infographics (“Upcoming SCOTUS Rulings Clarified For You“).

Near as I can tell, there are eight possible combinations of rulings, when you account for both Prop 8 & DOMA. Four of which are scenarios I wouldn’t like (variations including DOMA being upheld, or the case against it dismissed), one of which would be terrible (Prop 8 upheld), and the remainder of which would mean that at least in my home state, equal opportunity wedding bells would commence to ring again.

We’re likely not at the end of this whole marriage equality battle. The most breathtaking scenario –DOMA’s struck down plus Prop 8 is struck down so broadly as to also override all other homophobic state laws and establish the nation-wide constitutionality of equal marriage protections – is also the least likely. But the end of this long battle is beginning to look about as close as the rest of that pier. Not a friggin’ moment too soon, because we got a boatload more work to do soon as this job’s done with.