Herewith, this year’s Baba’s Day — not all of it, but much of its highlights — in 20 (!) pictures. With a few explanatory/riffy captions beneath each one.

[For posterity, I should note that a coupla years back I made a Baba’s Day proclamation, which holds true for this year and any other one to boot.] 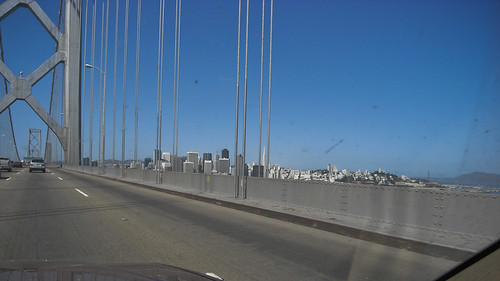 Our day began with breakfast in bed, but I’m not including images of that here because Baba (a) doesn’t like her likeness splashed all over the internet that much, plus (b) Jiminy Crickets I need a haircut.  So we jump to the moment above, where a brilliant bright day beckons us to one of the world’s finest cities, espied from one of the word’s most scenic approach bridges. The work-a-day Bay Bridge doesn’t get the glam attention that the Golden Gate does (see it? off there to the right? through the windshield schmutz?), but it performs a vital service: it brings much of the city’s workers over and back, daily (the poor schmucks not hep to the subway under the bay), and it affords all us Bay Areans a breathtaking view of our City’s downtown, Russian Hill,  and wharfs from the east. 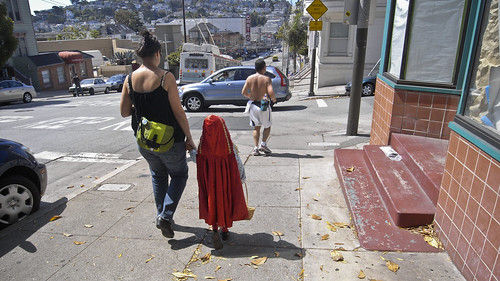 Mama and girlchild, here in one of her several crafty disguises (girlchild; not mama). We parked just downhill from the intersection Castro & Beaver, and yes, I have an old friend — a gay man — who lives in an apartment there.  We’ve always found it the pinnacle of irony that any gay man would be living at the corner of Castro & Beaver. 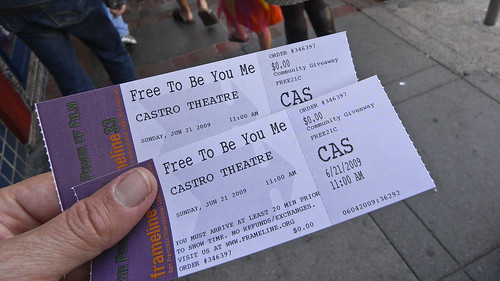 The show we’re gonna see! Free to Be… You and Me!  Yippee skippee! At the Castro!  Free, thanks to the generosity of Frameline and Our Family Coalition!

The beloved grew up listening to Free to Be… You and Me, and we’ve played it nearly nonstop for our kids.  Fan freakin’ tastic. What was screened was an exhibition print — made specially available to Frameline, San Francisco’s International LGBT film festival — of a 1974 television special crafted around the album.  (Here it is in all its splendor, broken into 17 parts on YouTube.) Proceeds from the album went to Ms. Magazine Foundation for Women; do check out the Wikipedia link about it, it’s an amazing thing and still apropos today — not one of the pieces is dated yet.  Alas. 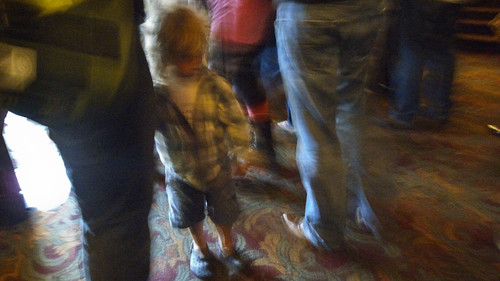 Boychild’s first movie theater lobby. Takin’ to it like a duck to water. Not shown: Snow White, who was passing out apples from a basket. Yes, Snow White, properly bedecked, tip-to-tail. With a verycloseshave. 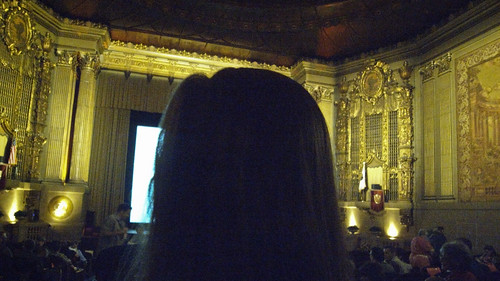 The lil’ monkey is ready for showtime.  This was her second trip to the movies.  Trip #1 was with Mama (Baba had to stay home w/ a sick boy) to the sing-along Sound of Music, also at the Castro Theater.  Thanks to the Castro’s frequently very kid-friendly programming, it’s entirely possible that our kids will spend the first five years of their movie-going lives ONLY seeing films here, easily the Bay Area’s most majestic movie palace.  The Grand Lake in Oakland is also of a similar ilk — also still has a working Wurlitzer.  I’m not sure how I’m going to explain an ordinary multiplex to them. (“Baba, where’s the ornate art-deco friezes?”) 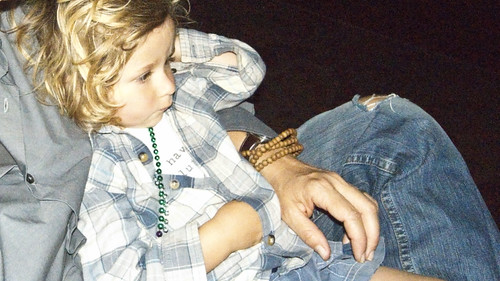 Lil’ peanut chillaxin’ on the most comfortable seat in the house (according to his particular tastes). He’s sporting rainbow beads, courtesy Julia and Yensing from Our Family. COLAGE’s Director Beth Tepper worked the line outside passing out postcards listing upcoming kid-friendly Pride events. By the way, my son mobbed the popcorn. Both my kids eat popcorn like I do: ramming the entirety of a handful into the mouth all at once. Mama does each individual kernel, one after the other.  I can’t explain why I eat this way. No idea. But they’ve inherited it.  I judge them not. 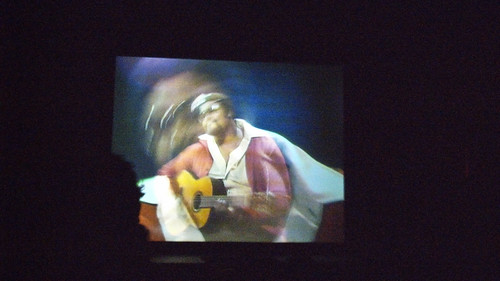 Easily the most thunderous applause came after Rosey Grier’s “It’s Alright to Cry,” here shown mid-lap-dissolve.  It’s a fantastic song. I can’t begin to imagine what it must have meant for so many of the gay men, many now dads, in the audience that day. That plus “William Wants a Doll.”  Anthems, both. 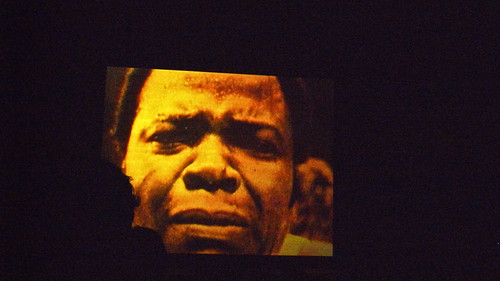 Many of the animated or  puppeted enactments of the songs in Free to Be… You and Me were sweet but not particularly remarkable.  But towards the end of “It’s Alright to Cry,” we were treated to a montage of images of grown-ups, mostly men, weeping.  It was utterly arresting. 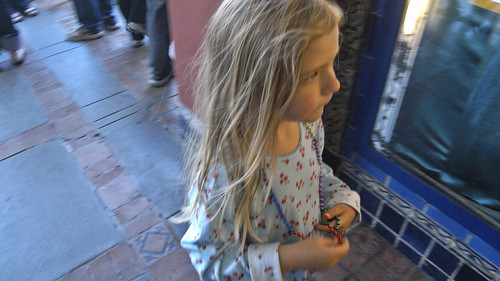 Girlchild outside, engaging herself while we talk with friends in the lobby after the show. Note rainbow beads on her, too.  The fashion hit for the whole day.

I have so many memories of this lobby (‘nother angle on it here), many of which began to be formed when I was not too much older than my daughter. My dad used to take my sister and me here all the time for “old timey movies” — Jeanette Macdonald & Nelson Eddy, Fred Astaire & Ginger Rogers, anything with Errol Flynn.  Pops would dress up nice, over my sister’s and my protestations (“You always wear a tie when you’re going to The City.”)  We’d snag parking in the little city lot behind the theater, or on the rare occasions when it was full, the other little city parking lot up 18th Street. Dad knew all sorts of insider info about the city.  He took Geography classes on urban field trips all over the Bay Area. And he, ahem, might have taken a field trip or two to the Castro himself.  At any rate, my sister and I felt special, and we all were transported, in our various ways, by the golden age of film up on the grand dame movie screen, introduced (as always) by show tunes on the mighty Wurlitzer organ. 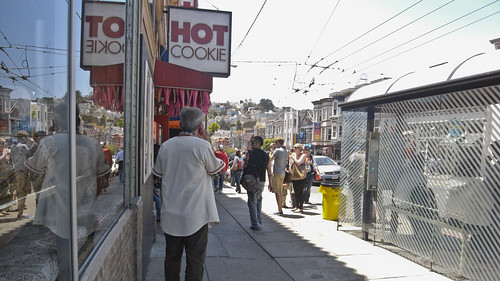 Back to Baba’s Day, ought-nine: outside the theater, we espied none other than Assemblyman Tom Ammiano, legendary gay activist, confrere of Harvey and one-time stand-up comic, on a cell phone.  Hot cookie. 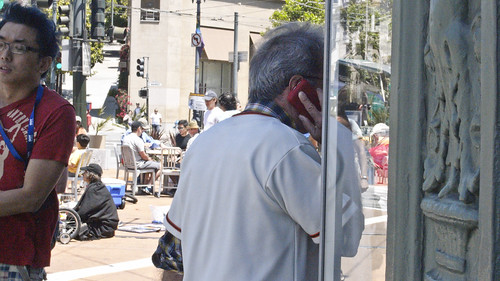 Okay, I followed him. No I didn’t introduce myself, or even ask to take his picture. Poor guy’s a public figure; he’s probably used to it. Plus I’m shy. Okay, I’m that strange combination of shy and yet mildly interested in recording various Notable Moments in Gay History.  Relevant intel: he’s a Giants fan (or at least his shirt was  a Giants jersey) and an iPhone user. Him and like 127,948 other SF residents.

Above, he’s entering Twin Peaks, the bar at the corner of Castro & 17th & Market (it’s a three-way, and  yes, I heard that snickering.).  I have to stop the Baba’s Day travelogue to note that Twin Peaks is a landmark for a good reason: it was the first gay bar in the country to have glass walls along its streetside (installed: 1972).  For the young whippersnappers amongst you who can’t imagine the significance of that Twin Peaks glass wall, I’ll spell it out: Major. Statement. Of Pride.  At a time when folks still had very recent memories of police harassment in these selfsame bars.  Stonewall, after all, was a scant four years earlier.

I have another friend who used to bartend there (a gal), who said it used to be nicknamed “the glass casket” or the “tomb with a view,” due to the advanced years of the average patron.  Needless to say, come the AIDS pandemic, these nicknames took on a new meaning. 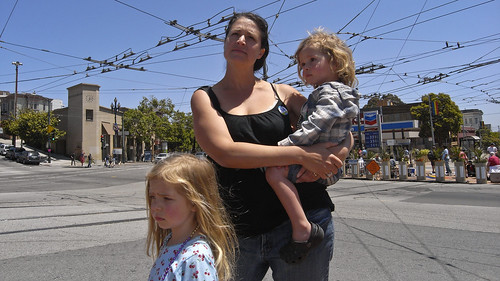 I had to take a picture of the fam-damily here. Partly, I liked the criss-crossey streetcar wires coming out of everyone’s heads. Partly I like how my beloved appears to have stepped out of a giant, inspirational, Soviet propaganda poster. With more time I’d do a version of this with outsize all-caps words coming out of her mouth in huge Bauhaus font.  Something along the lines of “I can only stand like this for so long pretending to look at something in the middle distance, honey!”

Also, this intersection figures into our early courtship. At a “Pink Saturday” party once — they block off this portion of Castro Street; a truckbed DJ sets up a sound system and people dance and dance in the streets, as well they should — the beloved and I Made Some Memories.  The contrast, now over a decade later, mit kids, tickles me fancy. 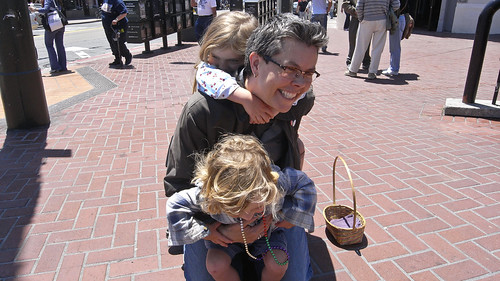 As payment for splashing the beloved up there, here’s me mit selfsame kids at selfsame locale: Harvey Milk Plaza.  Basket is Lil’ Red’s, natch. 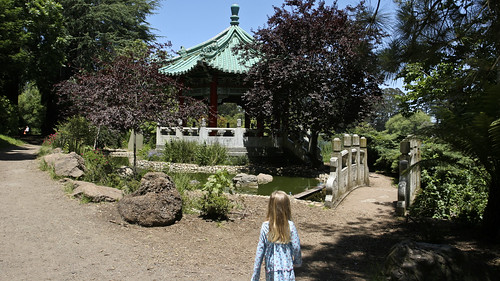 After the movie, we got some picnic fare and went to the island on Golden Gate Park’s Stowe Lake. Like magic, a pagoda appeared, empty inside, with a table and little marble stools around it.  I’m tellin’ you, when you have kids along, just about anything, including gobs and gobs of pigeon guano, can become magical. 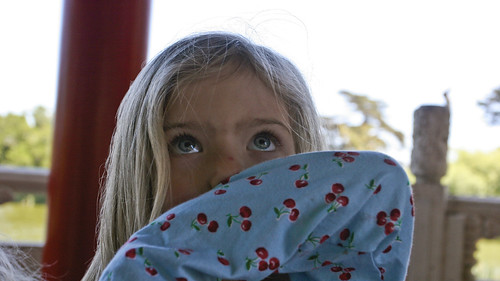 Look dear, there’s some pigeon guano now! Also, twenty-eight (count ’em! 28!) elaborately painted dragons. Okay, so that was what she was looking at. Truth be told it was only Baba who was fixated by the pigeon guano. 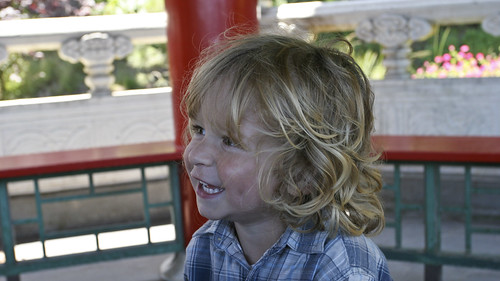 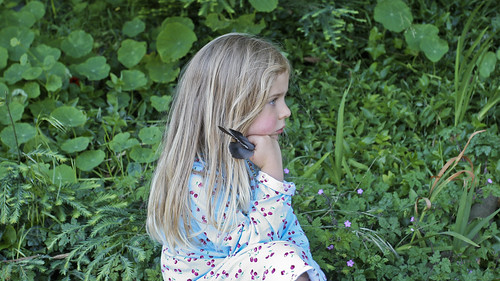 On our slow peregrination back to the car, the girlchild picked up a good half-dozen feathers, over the protestations of one and a half of her parents (you need 100% buy-in for a good, strong opposition, and apparently not everyone sees disease lurking everywhere, like I do). 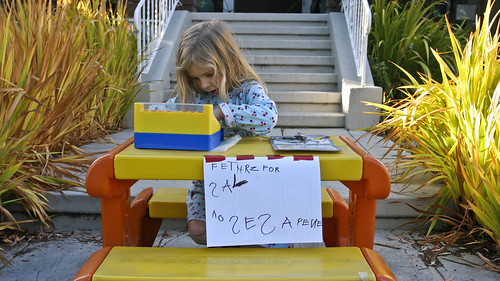 She brought the feathers home and tried to sell them to passers-by on the sidewalk. Her downstairs cousins are inveterate lemonade-sellers, the little capitalists, and she’s apprenticed with them attentively. Her sign reads: “FETHRZ FOR SAL 10 SES A PENE.” Oops, that doesn’t help. Translation: “Feathers for sale, 10 cents a penny.” I know, I know. It still doesn’t make sense. But I’m not about to split hairs with her over pricing.

Business was very slow. But the day was very good.

The worst are full of passionate intensity

14 thoughts on “A Baba’s Day pictorial”