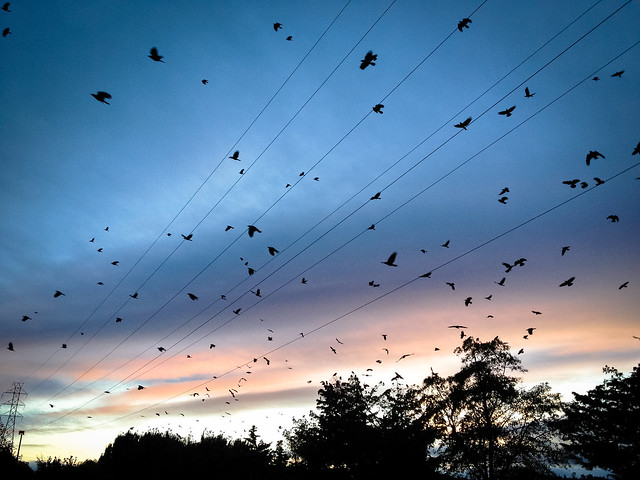 A storytelling of ravens, Belmont, CA.

“Ravens give me the creeps,” Suzanne said. She was among the trio of angelic preschool teachers who ushered our kids into their first understanding of community outside our home. Each one radiated warmth and calm. Quite naturally whenever I dropped off or picked up the kids, I lingered and chatted, sponging up what I could.

“I saw a bunch of them as I was walking to work this morning, like a gang,” she said. “I just don’t like ’em.”

I hadn’t given ravens a good deal of thought before that, but once she said it, I had to agree with her. Who’s going to like a carrion bird?  Even if they serve a vital purpose in any ecosystem, even more so in an urban one like ours.

“They do seem like bullies,” I said. I recalled to her a disturbing scene I witnessed not long after we moved to our Berkeley home a few years earlier. I’d heard a cacophony of birdsong from out in front, and saw small birds moving restlessly from branch to branch in the trees and bushes there. Eventually I figured out the object of their attention. A raven perched on a power line above our small sidewalk acacia tree, transferring its weight impatiently from one bony-leather claw to the other. This was the same tree in which I had just a few days earlier identified a sparrow, incubating eggs in a nest.

A single sparrow sat at a distance from the nest on which its mate remained, fluttering its wings and calling out in the direction of the raven. Finches, juncos, black-capped chickadees, California towhees, even a robin or two had joined the chorus, though in my ornithological ignorance, I couldn’t say whether they were attempting to aggregate their might and drive away the threat, or were simply calling out, like schoolyard kids, “It’s a fight! It’s a fight!” with equal parts voyeurism and warning.

For the short time I could spare (I had a wee one to tend indoors), I did my part to drive away the ravens. I yelled, I waved my arms impotently from the upstairs porch. I contemplated but did not actually throw a rock at them (a street, many car windows, and occasional pedestrians were the certain landing spots for any projectile). Anyone who knows ravens knows that all my efforts were ineffectual.

I had to return indoors to tend to my toddler daughter, and before I turned away, I saw a second raven alight on an adjacent telephone line. I remember wincing internally as I heard the rising and falling of the smaller bird voices, punctuated by the clicking and crying of the ravens. It was yet another moment of concession in a lifetime of them, each one heaped upon the last, few going unnoticed.  Like that dog that time, trotting headlong down the sidewalk, bearing the dazed determination and glossed-over eye of the lost. Or the brush rabbit I remember watching pull its way across the road as I sat as a passenger in my mother’s station wagon. I had to be in high school at the time, maybe younger. It had been hit, presumably by a car not too far in front of us, but was still able to wobble its way to the bushes on the side of the road.  The image has never left my mind.

Apparently ravens (and rooks, and crows) collect in a storytelling. Mallards group in a sord; larks in an exaltation; emus gather in a mob.1  This particular raven story–the one where Suzanne shared her discomfort with them, and the one where I watched a small storytelling of them begin to form around their prey–is one of so very many untold, until now.  Why do these stories go untold? The answer is as familiar as the stories we’ve told and retold ourselves, since we first developed the urge to tell them and the language with which to do so.  Sometimes I lack time; other times I lack spirit, or sufficient comfort in exposing myself, or enough sense of license to expose others.

Working in social media has sharpened my appreciation for who’s watching, and also at what cost.  This has not always been to my own benefit, of course. In most cases, it’s best to dance as if no one is watching (that’s precisely how I finally netted the mother of my children, or so she says: dancing with myself at the end of the night at a party, unawares).

In the case of my own kids’ slowly receding and morphing as subject in my storytelling, their growing selfhood has played a large part. When they were younger and less verbal, less recognizably who they are, it was easier to fill the breach with my own words. With each expansion of their ambit, I’ve felt compelled to pull my narrative ambit further in. Other parents at the preschool could be reading (numbering up to 20 to 30 total); then others at the elementary school (up to 200 and 300).

And yet. Stories sustain us, as well we all know. Emotionally true stories most, whether fiction or nonfiction.  Stories of others’ imperfections especially, because they give us courage to see and accept our own, and (one hopes) begin to learn something. This was the chief, if demanding rationale I fed myself when I began writing personal narrative publicly. Not to be an example of things done perfectly, but instead the opposite.

Nine months ago this week I lost my job and, off and on since then, my way. The day my job disappeared, as I wrote at the time, a branch some 20 inches in diameter at the trunk broke off the sidewalk gum tree and fell toward the house. It grazed the porch pillar, just missing the beloved accordion-playing gnome figurine that keeps watch on our porch railing, and very nearly rang the doorbell before it came to rest, filling the porch with a massive bouquet of branches and leaves. The following day was my son’s  first day of Kindergarten, and the day after that he fell from the monkey bars there and fractured the radius and ulna bones in his forearm.

Most days I leave my house, I look up at the gum tree’s healing branch collar, and mark the time since that eventful week. Nine months is an auspicious length of time.  My son’s cast was off him in about nine weeks, and these days, he is not just rid of any monkey bar fear, he lunges for them at every recess. Yesterday he mastered skipping a bar, to his unbridled elation.

As for the tree?  The collar shows clear signs both of the injury its branch sustained–a tear with damage, not a premeditated cut–and the growth since then.  The city’s arborists came out the very same day to remove the branch, which was blocking the sidewalk. But it was the day before my 50th birthday that they came back to trim up the rest of tree. We worried that they’d have to fell the whole tree, but upon closer examination, they decided they’d subject it to a good thinning, remove some other suspect branches, and give it a chance to show us it can thrive. Jubilee!

And what of my progress? It will be a story half-told and half-not.  For better and for worse, I am slow and deep, and with only fitful success manage to pull off the opposite.  This is less a sign of my half-century here and more a sign of how I’ve been since long before the collective Western pace began to pick up, when the Industrial Age gave way to the Information one, and fell under Moore’s Law.2  I notice that when I slow down, I often say less. But, I hope, I gain more. I noticed a whole lot in the weeks and months when time reopened for me, after the sudden shift in my working life last fall. I noticed my community, my neighborhood, my kids. I came to know again who it was that was nesting nearby, or was no longer. I watch them all and try to give thanks, branch by branch and bird by bird.

1. Feast your eyes on this beautiful list of collective nouns for birds.
2. It’s not just me thinking everything’s going faster and faster. Talk to Gordon E. Moore. Or perhaps skim the Ehrenreich review of James Gleick on the topic, if you’re short on time but just long enough on curiosity (!).

4 thoughts on “Of ravens and stories”