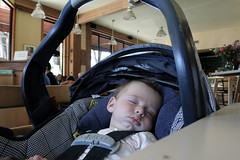 We begin the day sharing breakfast at a spiffy cafe with the Baba across the street and her family. Yep, we are so blessed that not only does a lesbo couple live across the street, they spawned, their girl is six weeks younger than ours, and one of the parents is a butch gal who calls herself Baba, too. Are we lucky or what? (Her partner writes of their lives here at Isobelog.)

Unfortunately, breakfast is marred by two things: I go to cut the lil’ monkey’s pancake into a cute little kitty shape, and she stares at it transfixed, and then bursts into tears. Needless to say it is impossible to put Humpty Dumpty together again. Not that I don’t hastily try, mashing the now indecipherable pancake puzzle pieces back into a feeble attempt at its original shape. All of this would have been bad enough on its own, but the beloved’s therapist, soon after we’d arrived, had been seated next to us with her lesbian family (I know; it sounds excessive, but this is Berkeley after all).

So not only do I kick off the day traumatizing the child, but the debacle is witnessed by my partner’s therapist. Henceforth whenever there’s any kvetching going on about me in one of her sessions, I picture the therapist nodding slowly and thinking to herself, “Of course. Who can forget what she did to that adorable little girl that morning at the cafe?”

As evidenced by the picture above, the lil’ peanut escapes the meal unscathed. 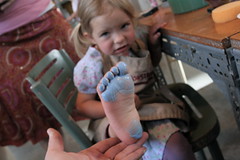 We hightail it from breakfast over to this D.I.Y. pottery place, where the lil’ monkey decorates up a plate, and then we emblazon a Baba’s Day mug with her footprint and her brother’s. Highly recommended Baba’s Day fun, especially if the baba in your life is prone to snatching the paintbrush out of the kid’s hand and then getting totally absorbed in her own creative project. Good news: the little girlie is totally healed from the trauma at breakfast (not like the therapist’s around to notice). Bad news: brother was utterly traumatized by having his foot mashed onto an inkpad and then rolled over the side of the ceramic mug. Will I ever be able to enjoy sipping my hot beverages from this vessel, knowing what I know about its origins? Only time will tell. 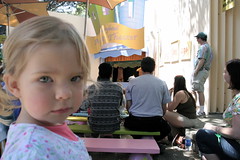 Next we skedaddle to drop off the beloved, who has a matinÃ©e gig at the Oakland Opera Theater (workshop of two operas in progress, one, The Panthers, by Clark Suprynowicz and Lynne Morrow, about the Black Panther Party, the other, Dark River, by Mary Watkins, about Fannie Lou Hamer). Not so many blocks away, the youngins and I take in some theater of our own, a puppet show at Children’s Fairyland, a “storybook park” that I used to visit as a tot. Hasn’t changed much at all, and that’s probably why so many folks love it still. 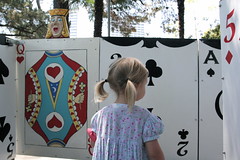 Most of the archaic design has a quaint appeal. But Baba got the heebie-jeebies in the Alice in Wonderland thing. I mean it’s all well and good when you’re outside getting lost in the cards and whatnot. The problem is, you only get there after falling down the rabbit hole, which is a scary metal slide all encased on both sides with cement. Okay so it was scary to me.

The rest of the trip, and I use that word advisedly, continues on in this fashion — you know, with the menacing, dark, encasing concrete — through narrow tunnels, cheered by the occasional trompe l’oeil mural ostensibly narrating the story. If only you could keep your mind on the story while you are fighting off panicky flight urges. As we wend our way, I am immensely proud that I don’t break down and grab the lil’ monkey by the waist and haul her, baffled and crying, at high speed through the remaining dankness into daylight. Frankly I would have but the lil’ peanut was strapped onto my person and I was just sure we would get wedged in some ghastly orifice somewhere and then I would have managed to have traumatized all three of us in one day. 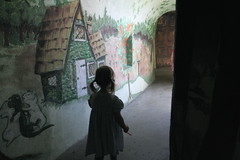 As it is, we make it out of Children’s Fairyland intact, though the lil’ monkey notes immediately to Mama, when we pick her up, that we most certainly did not find any fairies there.

We finish the day with a meal at our favorite Italian restaurant, joined by the Know-It-All-Brother-In-Law (mit kids), the Mother-OutLaw and the GrandBaba, and my Pops, who has been a very loving father for over forty years, and deserves accolades for each and every one of them. True to form, he is tickled pink about its being Baba’s Day for me. One time, after he gave me a fresh supply of his old shirts, I said, “You know, Pops, I’m the son you never had.” He replied, “No, you’re the son I did have.” And he’s right. At eighty-six, any given annual event very well may be the last such one I get with him, and we both know it.

I sit next to him at dinner with the lil’ peanut alternately sleeping and squirming on my lap, and all we can do is agree that, whether sleeping or squirming, he is a blessed miracle. We gave our son my dad’s name as his middle name. Since both our kids have my last name, it works out that our son’s name is identical to my dad’s, from the middle name on out. I manage to repeat this to my dad nearly every time we’re together. I muse that the lil’ peanut might even shorten his first name to an initial and use his middle name as his regular one. That way, he’d pretty much share my dad’s exact name. So far I’ve noticed Pops hasn’t tired of hearing this. And I haven’t tired of reminding him of it, glad, too, that some intimate part of him is taking on a new life into the future.

Outside after dinner, as we part, I plant a kiss on my dad’s cheek, and hug him in the tender way I’ve taken to hugging him these past five years, since I began to feel his bones creak and crack when I squoze. I can’t even begin to imagine a Baba’s Day forty years from now, being helped into some vehicle by my son or daughter. Their being parents, maybe. Their looking at me, in my dignified shuffle towards infirmity, feeling boundless gratitude for the lessons in loving they’ve learned from me.

I should be so lucky.

10 thoughts on “Baba’s Day, ought seven”