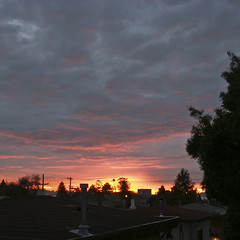 [At right: recent sunset, as viewed from bedroom window.] As a slow-ramp entry back into posting actual content here, I offer a review of the last year at LD, featuring the most commented-upon posts for each month.

I know, I know, the numbers of comments are quite puny by bloglular standards. To this I say: (A) I am not a numbers gal! Quality, not quantity, people! Also: (B) I require folks to register to comment, which weeds out both the cranky troll-types (happy face emoticon!) and the well-intentioned but either busy or leery of yet another source knowing their email address (sad face emoticon). Â And finally: (C) Everyone is off reading delicious other blogs and commenting on them! Who knows?! What do I know?!

Actually (and some of you all have said as much in various surveys) I only sometimes write in an “open” way, about questions everyone shares, inviting of chit-chat. Still, commentary is absolutely a measure of what strikes people, and it’s a measure of the sorts of topics that inspire folks to open up and chit-chat. Â That is always, always a good thing. Â Reader commentary is the best answer to the question: Why blog? Comments say (or these do, to me): here, let’s walk together a bit, shall we?

Desperately seeing Aclaudia: in which my daughter demonstrates her focus and zeal, to questionable effect. By the way, she’s just as focused and zealous, and she has just as many imaginary friends as she did a year ago. Only now she has more real friends, which is quite nice.

Maddow Widowers’ Support Group, open for business: in which I relay the sob story of my condition, nightly at 9pm or so, or whenever we get the kids to sleep and are ready to learn of the events of the day, via the world’s second smartest, second most debonair mannish lesbian. Â (Right, sweetie? Sweetie?!)

We get what we get: in which I tie myself up in a knot over my daughter’s adoration of ballet. Â Okay it’s deeper than that, and less about the caricature of narrow-mindedness that implies, but it’s a start. Â This got a lot of chit-chat, because it strikes at one of the core challenges we feminist parents have: how to wipe out as many gender-based barriers as we can find hemming our kids in, while at the same time celebrating whichever path they wind up taking. Whether or not the desire to take that path has been constructed for them or not. Â (See how hard it is to even provide a synposis? The jury is still out on this one, by the way. Will likely be ’til both kids are in their thirties, I’m figuring? That’s how long it took me to come to a resting stop.)

Thanks again, gentle readers: in which I put my gratitude for this blog-dialog into words and numbers (thanks to the catalyst of Robin Reagler, late and long of The Other Mother).

14th of 21: in which a heartwarming bathtime tale of evolution and ontogeny recapitulating phylogeny is told. Pretty much. The oddly numbered title part is indicative of how sometimes I am prone to a month of photos only (on purpose, to ventilate the brain and/or heart), and sometimes I number them so I and the random returning reader can keep track of how long the photo-only madness will be carrying on.

A Baba’s Day pictorial: in which I recount a day in the life of our family — a Baba’s Day — in words and pictures. Begins with a bridge crossing; features a visit to the grande dame movie palace of my youth (and one of the more recognizable icons of SF gay community); ends with my daughter attempting to sell feathers to passers-by on our street.

Scattered notes from an anniversary: in which I do another “day in the life,” this time more like an afternoon in the life, and it’s not of our family at large but my relationship in particular. Â Granted, most of the comments are sweet and much appreciated congratulations on our anniversary. But still. Â (As of last July: what? sixteen years together, fourteen of ’em post-commitment ceremony.)

“Weekend” bonus shot, 08.11.09: in which I stretch a vacation travelogue into my “Weekend bonus shot” slot. (The WBS, for non LD afficionadoes, is the black & white picture punctuation on the week I’ve done here for quite a while. Usually (usually) never miss one.) Mostly it’s a bunch of pictures of my kids having fun with the kids of the beloved’s dear old friend. Â Hey, it’s a parenting blog, what do you expect. Gratuitous kid pictures are very, very hard to avoid.

Royal dance: in which I catalog our girlie’s trip to her first tea at San Francisco’s Palace Hotel, in celebration of her beginning Kindergarten. As they so often do, gender roles, vision, and Â my parents — one long gone, one still livin’ and lovin’ on earth — figure in here. Did I mention yet that I love my daughter like mad?

Please help find Mitrice Richardson: a plea. She’s still missing. Many are (People magazine did a cover story on a raft of missing young people,Â Mitrice among them). But an LD reader clued me in to her. That she’s a young lesbian and a Californian certainly figure in to my concern for her well-being, and my posting about her. Also the fact that as a black woman, her case initially (and still) garnered disproportionate lack of media attention. As a parent and a loving person generally I have concern for all lost souls, though.

Re: the “fear on behalf of the children” meme: in which I vent a bit about the friggin’ panic button the religious right keeps jamming, to raucous success, every anti-gay marriage ballot initiative. Â Except it’s our kids that get jammed, not the friggin’ button, and they got jammed again in Maine that month. Â I am over it.

Girl oracle: in which I convey a little of my daughter’s clairevoyance. Â I happen to believe she’s got a good point.