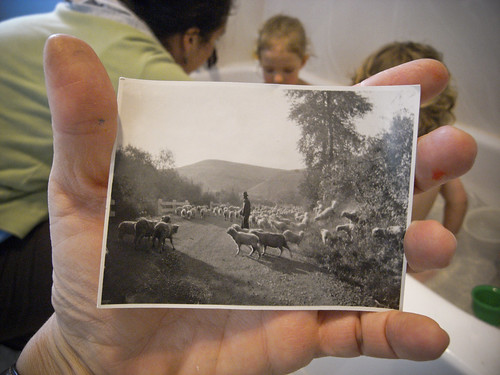 “Oregon sheep and shepherd going early to pasture.” by S.H. Marshall, my great-grandmother on my mother’s side.

There’s a story to go along with this picture. But it’s not about the Oregon shepherd himself, or the woman who photographed him, somewhere’s about the early decades of the 20th century, though that would have been a story, too, I’m sure. Â Every story my sister and I ever heard about our mother’s grandmother — the photographer and printer of the photograph above — was formidable; she was formidable, to the point that I’m sure sheÂ would have considered the term “battle axe” moreÂ sobriquet than epithet.

Here’s the actual story. We’re bathing the kids. Â Just before she gets into the bath, the lil’ monkey apologizesÂ Â to her mama, of her own volition, out of the blue, for having been rude a bit earlier. (Some sequence of events had not gone quite how she’d have liked, let’s say, and she stomped off and slammed a door shut. Her words in the immediate wake of the incident, to me as I was reviewing with her what had just happened: “I’m trying to get off of hitting these days. Slamming the door and saying ‘No! No! No!’ That’s better than hitting.” To which I certainly had to agree.)

Back to the pre-bath scene. The beloved shoots me a quick glance as she hugs the girlie, and I launch into a rendition of the music accompanying the big bone-wacking/ epiphany moment from 2001: A Space Odyssey. What with this unprompted apology moment feeling herstoric. As she clambers into the bath, our ever-observant girlie asks what the music was about, and her mama explains it was a joke to her; the girlie asksÂ what joke, and I Â launch into a whole dealie about how it’s from a movie, and this part of the music represents something that keeps happening in the movie, and then I’m off and running about human evolutionary breakthroughs, basically, and get all tangled up trying to convey the significance of the prehensile thumb and Cro-Magnon man’s discovery of the tool, and how consequential that was, and how it began to distinguish this great ape from other less great ones, and that’s how we pretty much branched off and came to be the planet-swarming, planet-defiling (okay I say these last two things just to myself), naked apes we are today. Â Meaning basically you and me, sweetie. Â

Her eyes are all a-glitter and she’s fascinated and epiphanal and I say, “You know that book we were reading about history?Â Â [–E.H. Gombrich’s A Little History of the World, quite the gem–] You remember how it opened?”

All stories begin with ‘Once upon a time.’ And that’s just what this story is all about: what happened, once upon a time. Once you were so small that, even standing on tiptoes, you could barely reach your mother’s hand. Do you remember? Your own history might begin like this: ‘Once upon a time there was a small boy’ — or a small girl — ‘and that small boy was me.’ But before that you were a baby in a cradle. You won’t remember that, but you know it’s true. Your father and mother were also small once, and so was your grandfather, and your grandmother, a much longer time ago, but you know that too. After all, we say: ‘They are old.’ But they too had grandfathers and grandmothers, and they, too, could say: ‘Once upon a time.’ And so it goes on, further and further back. Behind every ‘Once upon a time’ there is always another. Have you ever tried standing between two mirrors? You should. You will see a great long line of shiny mirrors, each one smaller than the one before, stretching away into the distance, getting fainter and fainter, so that you never see the last. But when you can’t see them any more, the mirrors still go on. They are there, and you know it.

[We had the distinct advantage of being in a public bathroom earlier this week, during which I stopped everything and pointed out this very mirror phenomenon, drawing her attention to this passage in the book.]

“Well!” I say to her. “Well! It goes on and on and on like this, until we all basically get back to the same parents, one of them’s named Lucy, and we’re all a lot hairier than we are today. Â We’ve most of us lost most of the fur on us. Â Except for your Downstairs Uncle’s back. Â But that’s another story for another day.”

She asks one or two more interesting and endearing questions about our distant heritage, and fur, such as “Is that why we have the hair we do have on our bodies, the little fine hair?” (she stopped to examine her whisper-light arm hairs), “Because we used to be monkeys?” and I think to myself: “Sure! why not?” So I say to her: “Absolutely: youbetcha, sweetie! That’s why we have the body hair we do have!” Thinking to myself: Mmmm. Wonder how far back “used to be” goes in her head?

Another line of inquiry unfurls a bit, like a little fern, a delicate little frond, and she asks something like “Was I like a little monkey in mama’s belly?” And I stifle the urge to say “NO! But man, in the first trimester damned if you didn’t look like something I wouldn’t have shoved off a plate of Pad Thai! Â I’m talkin’, put the PRAWN in prawn! I couldn’t even LOOK at the little illustrations in the book, though of course Mama was all sentimental–” But no. That I kept in. Instead I muster something like, “No, not a little monkey, but more like a little fish at first, really, it’s more like all of human evolution, ontogeny recapitulates phylogeny, like that.” Knowing full well of course that she may not even get to ontogeny or phylogeny until second, maybe even third grade. And then it’ll be de-bunked or made more sophisticated in like fourth. But you want to lay the tracks down, you know, so that when a notion does appear, it has a place to make a home.

Her eyes were twinkling and you could see the little cells in the brain behind there all a-popping and a-sizzling and expanding and reproducing to beat the band, and her brother makes a splash, and she looks at him and giggles, and as quick as you can say Bob’s your great-great-great-great-great uncle, she is Â as consumed by her aquatic hi-jinx as she had been moments before by the yawning expanse of human history. Just like that.

[It’sÂ A month o’ photosÂ at LD, though of course this little bit accompanying the above photo rather got away from itself. Yeah, well. A gal just might be a bit jumpy about the potential 10am Supreme Court announcement (about a potential Tuesday 10am announcement). Just a bit.]

The Twelve Days of BlogHer ’12: On Broadway