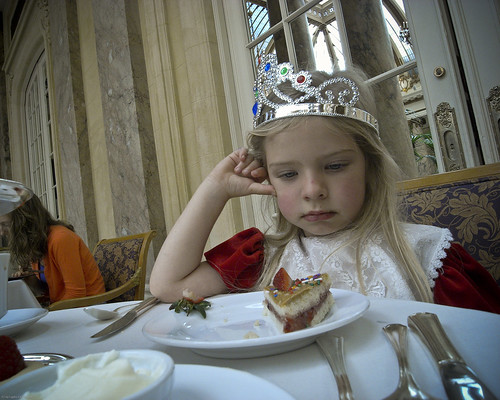 At any rate, she’s not holding the swanky PB & J sandwich in her hand like Hamlet held Yorick’s skull, so the whole notion is even farther off the mark. Â Plus I don’t think she’s contemplating the capricious transience of life. Â It’s not so much “memento mori” here as it is “memento peanut butter is still really gross, and just because I told Baba that I would think about trying it doesn’t mean I have any intention of actually doing so.”

Observant locals may recognize the location as the memorable Garden Court at San Francisco’s Palace Hotel; those familiar with the joint might also recognize that the crown dealie is part of the “Prince and Princess Tea” they offer youngins. The beloved initially thought we were humoring Baba when we went there to celebrate the girlie’s first week of Kindergarten. After all, by the end of the week we both realized that getting through this first Kindergarten week milestone easily took as much out of us — if not more — than it did out of her.

Before we even got onto the subway to head into the city, though, it became quite clear that the upcoming fancy tea was way more huge for the child than for the parent. Â For a gal currently fascinated by fairy tales and those who populate them, visiting the closest thing to a palace we could find and then pretending to royalty was as near as she could get to a dream come true. Between first hearing of our plans to whisk her off to this tea, and her finally discovering from Helmuth, the Garden Court maitre d’, that she could, she askedÂ “Do I get to keep the tiara?” at least five times.

For a scepter, she was given an 18-inch long, pencil-width dowel bearing on it an elaborate, twisty, multi-colored lollypop. After she’d eaten her fill of chocolate-dipped strawberries and fancy cakes and slurped down her cup of hot chocolate (peppermint tea was an option, but it’s not like she heard that once the words “hot chocolate” had passed the waitron’s lips), she picked up the scepter and traipsed gentle laps around our table swaying it to and fro. Â “Sweets to you, sweets to you!” she repeated in her high falsetto as she wiggled the scepter in our general direction like a divining rod. Â On one or two laps she came dangerously close to clipping the gal at the neighboring table. It’s all fun and games until you knock a patron unconscious with your lollypop scepter.

Meanwhile her ma and I ate more slowly. Little salmon sandwiches. Egg salad ones. Cucumber ones. It took a while Â before I got to spreading the rose petal jam on the fresh scone, but when I did, the flower scent (more pungent than you’d expect, coming from the jam) was like Proust’s madeleine.

“My mother loved roses, the scent of them. In flowers and in perfume.” Long pause. Â “She would have loved to have been here.” I say this to the beloved as if any of the above information would have been news to her.

She looks at me sympathetically. In the background, the pianist renders a lilting, graceful version of “Bennie and the Jets.”

“She was the Anglophile’s Anglophile. Never travelled to England but always wanted to. Insisted I have strawberries and clotted cream when I was in London that time.”

The beloved smiles sweetly, and continues to say nothing. She’s heard all this so many times before. We courted, after all, amidst my year-old mother-loss grief.

We both take in and exhale our biggest breaths.

The beloved says to me, “I’ll bet she is here, right now.”

The girlie makes another tip-toey lap, pausing to knight me, then moving on, barely missing the sandwich tray on her way out.

“Yep,” I say, “but I’ll bet she wouldn’t have expected to find me here in this outfit.” Back home the girlie had insisted I get as fancy as possible, which to her always means the light blue tie with the polka dot flowers on it. Dark grey Italian wool suit, BR off the rack. The middle class gal’s Saville Row bespoke. Â She is thrilled when I am got up this way. I on the other hand, when I am got up this way and not heading directly for a queer event, feel like ROTC officers probably do on the Berkeley campus on dress uniform days. Or a version thereof. I am proud, I am comfortable in my skin, and I am well aware that I appear unusual at the least, perhaps even surprising. Â At the most I might inspire Â what I hope will be only isolated pockets of well-restrained, inward derision. I quietly hope I don’t get bopped upside the head, especially in front of my daughter. Old fears die slowly, maybe even never die completely.

The girlie pauses in her circumnavigations. “Why, Baba? Why wouldn’t she have expected to see you in this outfit?”

She asks it in the way kids ask questions like these: their tone tells you that they already half-know the answer, and they’re asking as much to discoverÂ how you’ll answer asÂ what.Â By now the pianist is on to the Beatles’ “Blackbird.”

“Well honey. Â Every new child invites their parent into a dance. Sometimes it’s a dance the parent knows already and loves, sometimes — most of the time — there’s something new about it.” I check to see she’s still with me, and she is. “My mom was a girlish girl, and she expected me to be that way. But I wasn’t. So she learned how to dance with me as a boyish girl.”

I don’t tell her yet how complicated that dance was. Pain here, grace there. The long, arduous walks through the aisles in Capwell’s, the now-defunct department store where our mother would get my sister and me our fall school clothes. Me, longing for the stuff hanging on the racks over in the boys’ section, and rarely being able to even identify that longing powerfully enough to advocate for myself, much less succeed in scoring the full-on Leave It to Beaver regalia I wanted. And yet the Tonka trucks, the HotWheels, the baseball gloves I did get for my birthdays. My mother’s lingering disbelief that my lesbianism wasn’t rooted in some negative experience with a boy, somewhere, somehow. And yet her tireless, passionate advocacy of my full self — as much of it as she was able to see.

We never got to the end of that dance together. Did not. Death came first, and I will never forget the St. Paul bar I was sitting in, a month and a half after she died, when that realization grabbed me by the lungs. I held my face in my hands and wept without ability to stop weeping, minutes on end, and the three or four people with me could only look on sympathetically and occasionally pat my shoulder.

I have gotten there with my dad, I thank the heavens. One afternoon a few years back, when I was thanking him for the hand-me down shirts he had just given me, an old habit between us by then, I said to him: “Pops, I’m the son you never had.” And right back he said, “Doll, you’re the son I did have.”

I look at my daughter, tiara akimbo, lollypop scepter at half-mast in her limp wrist, this evidently girlish girl. She fixes a level, unblinking gaze back at me, the only Baba she’s ever known. Then she raises her scepter again, and continues her dance.