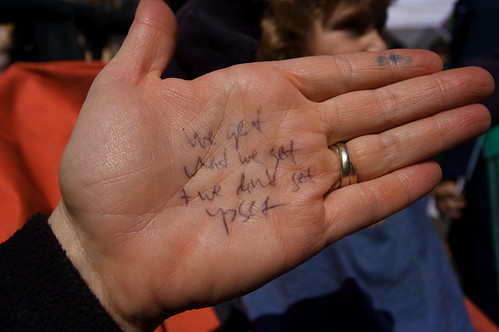 “We get what we get and we don’t get upset,” said Miss Paula the ballet teacher at the Y, as she was doling out some colored plastic rings with pretty streamerey ribbons attached to them.  Evidently in past years there has been a rash of streamer-ribbon-ring kvetching. No longer. Miss Paula lays down the law, and the pint-sized ballerinas obey.

I watched my girlie absorbing the dictum with a kind of reverential attentiveness she gives only to Miss Paula, and scribbled the words down on my hand so I wouldn’t forget. I am so far from Miss Paula, in law-laying down style and frankly most every other style domain, that most evolutionary biologists would be hard-pressed to locate us in the same species, much less the same genus, family, order, or class.  But I try.  Lord knows I try, in my own way, to guide the young (er, never mind yesterday’s post).

“The BALLET TEACHER?!!!” some of you may be sputtering at this point. “Who cares about distracting tangents about discipline! Let’s get back to: The BALLET TEACHER?!!” To which I have nearly nothing to say. Our girlie loves to dance;  her cousin downstairs took ballet; she asked nicely;  she’s exposed to the culture she lives in (I know, I know; but the bunker in Idaho idea fell apart when we realized we’d have to make our own lattés).

The upside of her ballet class: she wears black. Goth ballerina. She continues to list purple and red as her favorite colors.  Yes: these colors are close, dangerously close to pink. But! — not! — pink!  And in class, she wanders around semi-aimlessly (okay, not quite that, but rare is the time that she is doing exactly what most of the other little girls seem to be doing). While she listens to Miss Paula carefully, she only partially obeys her, as if Miss Paula’s voice is abstract, European-accented music coming out of a beautiful, tiny-framed instrument, and its purpose is merely to provide accompaniment to the dreamy imaginative space in the room, along with the quiet classical piano on the boom box, and the gentle movements of the children. 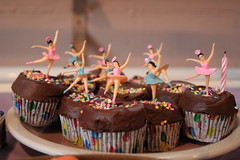 Just because I am sympathetic to our daughter’s aesthetic and cultural predilections doesn’t mean this ballet business has been smooth sailing for me.  I nearly had a seizure at the birthday party her cousin held at a ballet school once. Really. I needed to keep a paper bag near to hand, and lean over and breathe slowly in and out of it when the kids weren’t looking.  A sea of pink, pink-pink-pink!, and tutus!, as far as the eye could see. Which wasn’t very far, since my  hands were covering my eyes most of the time.

My brother -in-law and boy nephew were totally fine the whole time, by the way, because why? Because at no point was this pink tutu-filled world laid out for them as their one, their only, their true destiny. A destiny that they would have to fight, tooth-and-nail, from pre-puberty ’til sometime around about the late twenties, maybe even early thirties.

Not that I’m bitter.

I have gone through a kind of shock at the first appearances of haute femme propaganda on our free-spirit girl child.  I swooned, and had to be caught at the armpits by several friends as our daughter, then a mere three years old, slowly descended the steps from her cousin’s house wearing a 19th century-style hoop dress ball gown and clear plastic quasi- HIGH HEELS, all purloined from the elder cousins’ dress-up box, and no, the swoon came not  from  parental pride at her beauty, nor from  parental concern over the navigability of the steps in those shoes.  Though I did worry about the steps.

But even then, mid-swoon, I knew that just like with cuss words or potty talk, if I drew attention to my horror it would only make the situation worse (er, never mind my sketchy credulity as profanity or potty-talk cop).  I knew that she was just trying on haute femme femininity for size — for play, for dress-up. I got no worries that we won’t be able to introduce the subtleties of the gender-as-performance argument over the years, and I got no worries — at least right now — that our girlie won’t be able to appreciate the finer points of it.  Hell, her femme-bot Mama sure does.  I have seen her apply lipstick in the reflection of a spoon, and that makes a gal like me swoon.  In a good way.

I dressed up, too, at every opportunity that presented itself throughout my youth. Only I was a swashbuckler.  Miss Paula might have said to my parents, “We get what we get, and we don’t get upset.” 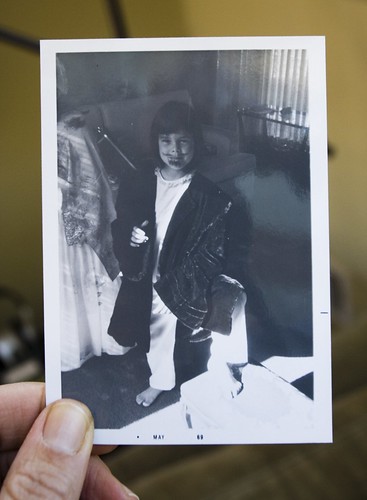