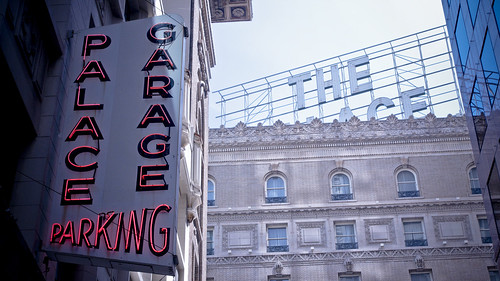 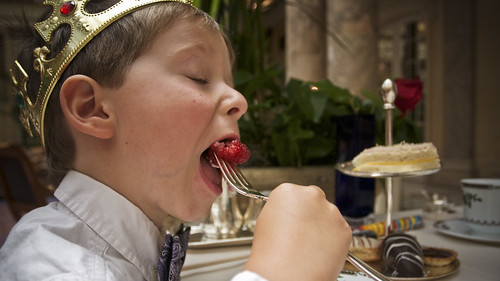 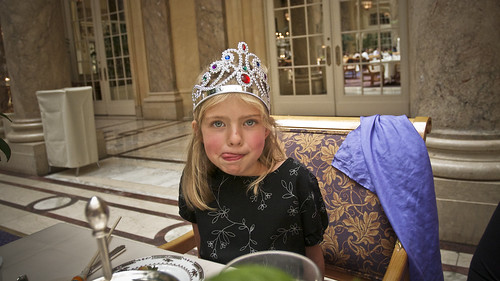 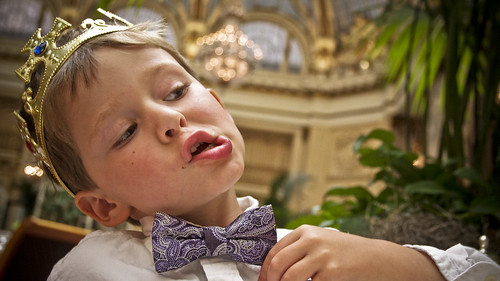 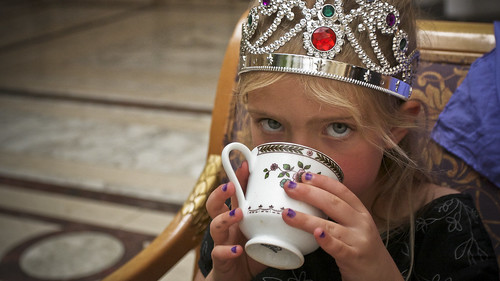 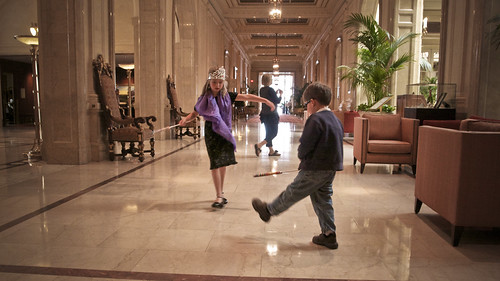 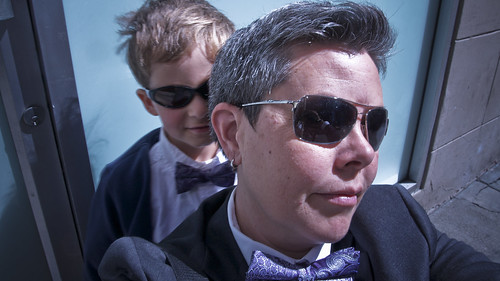 A year and nine months ago, we went to San Francisco’s Palace Hotel for tea at the end of the girlie’s first week of Kindergarten (more wordy account here). Â Her brother was too young to come along then, but he’s more than ready now, and so this afternoon we launched what we hope will be an ongoing end-of-the-school-year tradition.

For his part, the boy child acquitted himself with panache. Sure, he ate his PB&J only and no other sandwiches. And yes, he wanted to slither under the table once. But it turned out it was for legitimate reasons: his back-up pair of sunglasses had dropped under there.

The sunglasses were accessories to a very carefully pieced-together outfit. He had picked out matching bow ties for us to wear (yep: Baba’s not the only dandy in the family). But that was just the beginning: he saw to it that we matched in every way possible. Same color belt, same color shoes, same color jeans. It took a lot for me to convince him that it was okay for me to wear my grey blazer (he didn’t have one). But he felt all right when he wore a dark sweatshirt with the hood folded in. He couldn’t find his “dress up” Baba glasses — an old pair of reading glasses of mine, with the glass no longer in them — and so instead, he proposed we both wear sunglasses.

We were very warmly welcomed by every single person we saw, from the chaps where we parked the car, to the doormen just outside the hotel, to the maÃ®tre d’, to the patrons we passed en route to our table, to our waiter. I will admit some concern that a woman dressed more or less like an ice cream salesman would draw attention. Turns out, not as much as her criminally adorable mini-me of a son with the matching bow tie.

(For the record, I elected not to visit the loo. It’s all fun and games ’til you cause ladies to shriek and zig-zag out of the bathroom with their arms outstretched in front of them in abject terror. While the chances may have been slim that I’d elicit such a response, I didn’t feel like pushing my luck on such a nice outing with the kids.)

“How many years do you think you guys will want to do this with us?” I asked ’em, between bites of chocolate-dipped strawberry and sips of hot chocolate (the Palace defines “tea” fairly loosely for the younger set).”‘Cause we’re prepared to keep at it all the way through your college years. Â Just warnin’ ya.”

“I’ll do it as long as I can, Baba,” said the girlie, and I believe her. My main goal is to outlive their desire to take a year-end tea here with me. Â That, or have their Mama across from me a dozen or so years hence, as we sigh together over the empty chairs at the table and toast one another over a job well done.