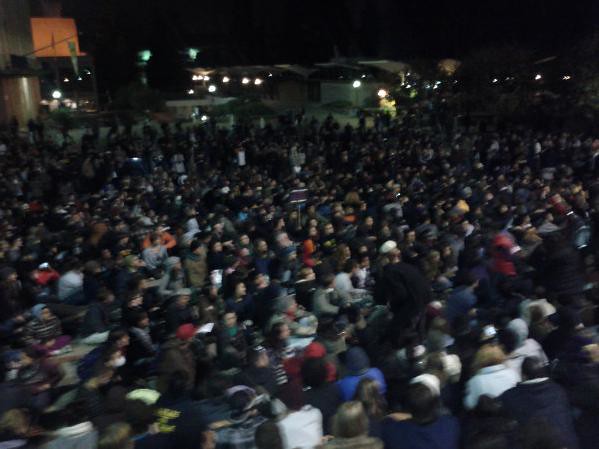 Really cool sketch of what was happeneing where, when, by Danny O’Brien, re-Tweeted by my über-rad colleague Liz Henry, who hied herself across the bay to live videocast the occupation.

One issue this day, among many: affordability of public education.  University of California has hiked tuition nine times in the past ten years; 32% in 2009 and then another 8% in 2010.  Increases of another 8 – 16% are projected in the coming year.  One plan under consideration would institute a series of 16% annual increases over the next four years, to a cumulative total of an 81% increase.   What was once the finest public institution of higher learning in the country, accessible to working class and middle class alike, has been steadily becoming a competitively priced private one, accessible to the wealthy, or anyone else capable of qualifying for and then shouldering debt in the neighborhood of a home loan before the age of 21.  When public institutions cease to be financially accessible to the public, something is broken. Still, all these young people aren’t out here only about tuition hikes. Teach-outs earlier in the day drew much broader connections to the economic disparities at the core of the larger Occupy movement.

One of the 39 arrested, over the course of the day: English Professor Celeste Langan, author of Romantic Vagrancy: Wordsworth and the Simulation of Freedom. Apt, no?

After breaking up into small groups to discuss and vote, the General Assembly called for a UC system-wide General Strike Nov. 15.  Twenty nine “stand aside,” 31 against, 569 in favor, 95% approved.