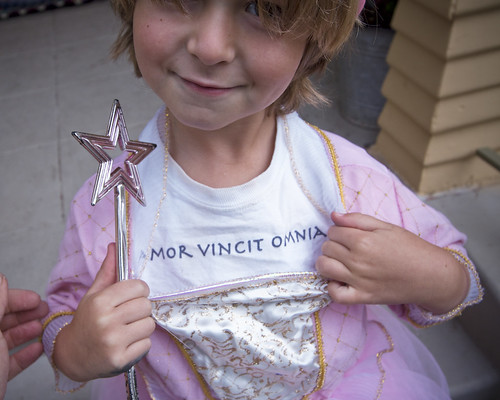 The boy’s Halloween outfit, as worn to preschool yesterday. Worth rendering in color, even if it is the weekend and I usually like to go B&W on ’em. (Full-body preview shot here.)

He picked this fairy godmother outfit himself, when out & about with his Ma. He was reportedly entranced the moment he saw it, and insisted they get it. He had initially intended to be a poodle or perhaps a monkey, but all those plans went flying out the window when this sparkly twinkly number spoke to him from the 5-and-under aisle.

I added in the t-shirt, what with it being a chilly day yesterday. You know, for Northern California standards. It was the only clean white one we had, but I also like that it bore an additional, subliminal (and I mean really subliminal: none of his preschool chums reads Latin yet) message.

In the morning before he went to school, he said he was worried someone might say he looked silly. We asked: “Do you still want to wear the outfit?” He answered: “Yes. But I’m worried someone will say I can’t.”

Still and all, I felt like shadowing him like a Secret Service Agent all day.  I mean, he’s a little 35 pound pink ball of everything masculinity both needs and fears/reviles. To a pack of big dogs, he’s a Chihuahua snack. But not everyone is a big dog, or pretends to be. Plus at preschool my Secret Services weren’t necessary. Most everyone was unpurturbed: this was merely a slightly showier variation on a familiar theme. Several parents smiled sweetly at me; a mom or two may have even swooned (he really is a dreamboat, and it’s a nice color on him).

When later we went to pick up his big sister at the elementary school, as we entered the playground I scooped him in my arms and carried him through a phalanx of fourth graders. This based on some repeat snickerers and pointers, who weren’t among this bunch, but like I’m going to take a chance. Love may conquer all, but it’s a slow conquer, and I’m sure not letting my boy’s psyche be roughed up before it has to be.

Does it have to be? No. Will it be? As a genderqueer, lesbian parent who knows a bit about the costs and benefits of transgressing social boundaries, and as only a wannabe optimist, I just don’t want to answer the question. Anyhow, one day I won’t be able to scoop him in my arms.  And one day he may actually want to stride through that phalanx (pick a phalanx; any phalanx) all by himself.  As have countless parents before me, I hope, when the time comes, that I have the strength to let him go. As have countless parents before me, I realize that at some point, finally, I don’t have a choice.

Reach for the sky

Just a little note from me to you