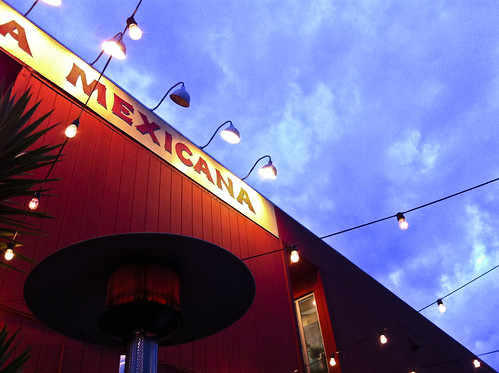 Watercolor sky, outdoor seating empty but for us, a happy, relieved quartet. I asked the girl child earlier in the day: “Where would you like to go for a celebration dinner?” Her answer, echoed by kids if not from coast to coast, then certainly up and down the great state of California: “Burritos!”

We were celebrating the end of the beginning, the personally momentous event of our renovated house passing final inspection from the grey ponytailed — but don’t let that fool you; he was all business — gent from the city. “You’ve done really nice work here,” he said to Dan, the chap who’s been the foreman on this job since, oh, somewhere’s around June, July. A man of few words (unless you hit him up for carpentry or home repair advice) and high standards for craftsmanship. Ponytailed gent from the city was right.

Since the beginning of summer we’ve been carried away on the fast-rushing river of a pretty much whole-house remodel (left way back there on the riverbank was the discretionary time I had to write much a’tall here, and as I scramble back for shore now, that’ll be one of the first logs I grab onto). The term “whole house” begs clarification, though, since we’d only been living in the attic of it for the previous five years. My beloved’s brother and his family living on the main floor.  It’s all such a long story which is, as with so many long stories parsed out in a medium such as this, perhaps only tellable in bits and chunks.

I’ve withheld writing much about this tangle — chiefly the co-housing part of it — because I couldn’t bear to have written about it  if it fell through (emotional arrangement; not physical: that part was addressed by Dan, et al., this summer). As of today, I’m willing to say that the vessel — both emotional and physical — is done being built. It’s sea-worthy and awaiting its champagne bottle.

Since I’ve been holding back, and since I’ve been waylaid from this blog for so many months now, I feel compelled to provide at least a Cliff’s Notes sketch of the long story’s outline. Bullet points may help keep me brief.

•  We moved into the attic of a house five years ago. Sounds worse than it was. Really it was just a not-in-the-least-bit-to-code attic apartment of an otherwise handsome old house.

•  My beloved’s brother & his family moved downstairs. We’d each sold our houses and made the leap to tie ourselves together at the ankles for the forseeable, imaginable future. He was going to build a house in the rear of the lot; when he finished that and vacated the downstairs, we’d restore and then occupy the whole house, which it was, once — a whole house.

•  Brother-in-law snagged the duplex next door when it went up for sale soon after we settled in; he rented it out, and then proceeded to scratch his head for the next five years, wondering how to keep it so’s that one day a grandparent or two could be parked there (when the time was right). Visions of even more extended community danced in our heads.

•  Whole process took a bit longer than we expected.

•  Whole process has taken all our finest skills and put them to their most significant use.

•  At no point has this been anything other than supremely worth it.

•  Meanwhile, we had a second kid and the attic got even smaller.

•  At the outset of this whole process, we were utterly shell-shocked in the very immediate wake of the death of my sister’s son, at ten. Cancer.

•  Moving here, especially at that time, was a gesture toward community and family, an investment (the biggest we’ll ever make) in pretty much an absolutely optimum environment for our kids.

•  The kids have five loving adults around them and there’s four  of them (cousins) on site and they share a huge yard (in the middle of the city) and when they come home, they enter a village, basically, and we all work at sharing a ton, which they are growing up thinking is simply what you do: you share what you can; you learn to understand one another, see how what binds us together is more important than what differentiates us. We are here for one another, unequivocally; there’ll nearly always be someone there to help you when you need it. That goes for grown-ups as well as kids.

•  The fifth loving adult? One of my oldest and dearest friends, who bought into the duplex next door, thereby ensuring that we really do have a co-housing thing going on here, and not just a brother-sister shared lot thing. Our kids call her by her whole name, first and last, for fun, and traipse across the yard and let themselves into her place to read her old books (girl child) and jump up and down on her couch (boy child). Usually when she’s there. She’s the one that taught us the word “gloaming.”

•  Just over five years after moving here, culminating in a crescendo of five months’ displacement and domestic chaos, it really is the end of the beginning and the beginning of what’s next. Wounds of loss and pain are still palpable — PTSD is written all over my parenthood; scars from the loss that launched our time here have hardened in unexpected ways.  But after all, we are finally home.

Gracias a díos and pass the salsa.