I’m smack dab in the middle of Texas at Dad 2.0, a conference organized by and for dad bloggers, who, while a relatively smaller posse compared to mom bloggers, enjoy the benefit right out of the gate of not suffering the diminutive “daddy.”  So I was already in a good mood before I got here.  Also lifting the mood is the fact that most dad bloggers are men who care a lot about pushing at the edges of  modern fatherhood, making space in the discourses of parenthood for men as engaged caregivers rather than stoic providers or bumbling babysitters, thereby making more space for men who aspire to be engaged caregivers rather than stoic providers or bumbling babysitters.  Implicit in this project, for many (though by no means all), is the work of expanding received understandings of masculinity.

In other words, a ton of these guys are up to the exact same things I’ve been up to here at LD for years. Though we’re chipping away from different positions, we’re still at work on the same monolith, trying to carve out a wider understanding of who parents are and can be. For their part, and despite their positions of seeming normativity (most in this community and at this conference are white; psyche! Lazy Dad inna house!) they’re redefining fatherhood.  For my part, I’m chipping away at a bit of fatherhood and a bit of motherhood, and in the process pointing out, through lived experience, the vast overlap to be found between the two when you’re bound by neither designation.  Even if for many of these guys their paternity and legal legitimacy are unquestioned, their credibility as compassionate, even competent caregivers is often not a given. Dad bloggers are changing that, either implicitly or explicitly, and with each blog post and each new reader, most are elbowing out just a little bit more room for people in the next generation such as my full-spectrum boy child, should he chose to be a parent when he grows up, as well as for both of my kids, should they co-parent with a man.

I’ve been totally fascinated by the conversations in the panels I attended today (and hope against hope I will be able to wrestle the proper time to do a retrospective recap of the highlights). I am also extremely excited about the panel I have the honor of moderating tomorrow: First Rule of Communication: Know Your Audience (Gender Politics, Role Reversals, and What Men Read).  The chaps who’ll be ruminating, freestyling, and holding forth on this topic will be  A.J. Jacobs (A.J. Jacobs), Charlie Capen (How to Be a Dad), Mike Spohr (The Spohrs are Multiplying), and Paul Banas (Great Dad).   We had a great conversation in preparation for the panel, and that was just five of us! Given the lively, hugely engaged conversations at the panels today, I have great expectations for our panel tomorrow.

One or two folks may be moseying over to this blog for the first time (not as many as would had I actually gotten my bio & photo in to the organizers in time! cough!), so I thought I might offer up a whistle-stop backstory. To get a sense of what I’ve been up to over the years, you can check out a Best Of page here, or noodle around by extremely obscurely titled category (see that pull-down menu, down there in the footer? I told you it they were obscure!). Meanwhile, I give you ten embroidered biographical factoids that may serve as introduction. 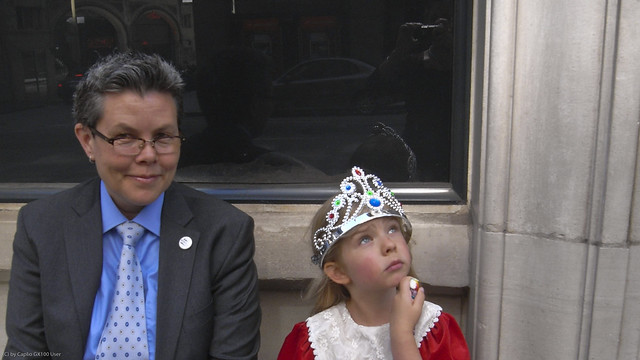 The author with daughter, coupla years back, following tea at the Palace Hotel, San Francisco, CA.