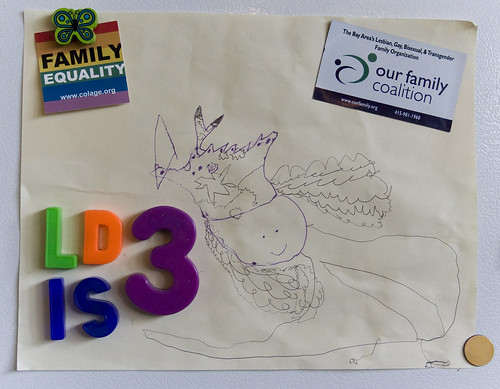 Post #671 (accompanied by the usual post-post ironing job, ’cause why? ’cause I posted it at 3am, that’s why).Â

Now that we are living with a youngin who made it through the so-called “terrible twos” with her sweet personality fairly intact, and then went rogue on us not long after she turned three, I don’t know what to tell you to expect from this blog in the upcoming year. Â I can, however, recap a little of what seemed to have happened to it and to me, its humble shepherd, this past year.

First, a nod to anniversariesÂ one and two.

Okay, now back to three. Â This time last year, parentally-wise, the beloved and I had just eased past the monumental first year of our second child, which had turned out to be just a tad more challenging than we’d anticipated. Â After our lil’peanut turned one, we were just beginning to get our bearings. Â The waves were no longer violently crashing over the bow, the sea-sickness had begun to abate, the sun seemed to be peeking out of yon cloud, and the wind was at our backs. Â Oh, there was the matter of our elder child’s maniacal swings from sweet to sour. She was, at this point, mid-way through her “terrible threes,” after all. Â And it’s not like we weren’t still sleep-deprived to the point of delirium. But we were finding ways to manage the delirium. More important, we were beginning to be able to envision a time when delirium would not be the order of the day. We actually began to feel like we were finding our sea legs as parents of two kids under four years old. 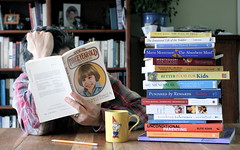 Blog-wise, around about this time last year, dozens upon dozens of you fine readers were completing a reader’s survey I had drawn up. I gleaned enormously useful things from it, and plan to work up another sometime this month, so’s to keep my understanding of you-all — including your likes, dislikes, and insights — tuned up annually. Â This time last year I was feeling freshly appreciative of this blog’s having become a finalist in The Lesbian Lifestyle Blog of the Year award, and was already eagerly anticipating attending the first of what I hope to be many BlogHer conferences. Â I was hugely grateful for what this blog had been doing for my experience of parenthood, and sincerely amazed at the fact that it was able to facilitate, now and again, good things for other folks as well.Â 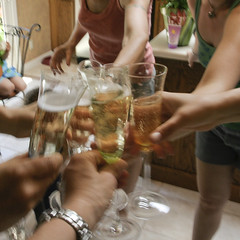 In May, I took a month’s hiatus from post-writing, instead posting photos daily. My paid work had intensified, and I was also trying to ready the site for an overhaul, thanks, on the downside, to a number of unnerving spammy derailings, and on the upside, to the very generous offer of a friend to underwrite a rehab which would, among other spiffy advantages, keep the spammy incursions further at bay.

I look back on the things I was writing and posting about at that point, as well as at folks’ comments, and see one thing: the peace and quiet of the pre-high-gear marriage equality battle. In mid-May, the California Supreme Court made its decisionÂ in the In re Marriages cases. Chicory, of An Accident of Hope, was visiting with her daughter Sassa. Â She learned of the decision from a cell phone call she received. Â I was flabberghasted. I checked the news online, and was no less flabberghasted. We both kind of spent the rest of our time visiting together being more or less flabberghasted. Â Our daughters, fortunately, simply continued to play together.

But from that time onward, the impending right to marry and its impact on us only expanded, slowly and absolutely, until it seemed to fill most available space not taken up by Clinton’s and Obama’s historic bids for the White House. Â Even though I remained conflicted about what the institution of marriage meant to me, I couldn’t help but be breathtaken by the first legal wedding, of civil rights giants Del Martin and Phyllis Lyon. Â My beloved and I went and got our license that first week in the same building, and planned to hitch ourselves on our anniversary later that summer. Â With that, I began slowly (and fairly exclusively, after the thrilling exception of a field trip to an enormous estrogen tank) to refocus this blog’s attention on the job of disentangling and conveying certainly not the meaning of this ruling, but a meaning of it. Soon trying to disentangle and convey the ruling gave way to disentangling and conveying the marriages, and soon — too soon — this gave way to disentangling and conveying the fight to retain the right to them. After this, the aftermath. (All the while, in the background: my boy became a toddler and my girl became literate.)

Finally, and most emotionally cleansing, I reviewed all the marriage equality posts I’d written in the wake of the Supreme Court ruling, and created a series of them, twenty-six in all. I indicate them with this photo at left (from the November 15 Join the Impact protest rally), and link them throughout, one post to the next. Got an hour or so? Have a read! (Spoiler alert: it goes from comedy to tragedy and back again, and whereas most Western narratives seem to end in marriage, this one ends without the marriages it began with! Go figure!)

Collecting these posts has done more than provide an archive of my documentation of the period, from Supreme Court decision through summer of love, through fierce election campaign, through its aftermath. Gathering it all together, and looking at what it all represented, I understood my fatigue. I was not at all surprised I became so bereft of words after the passage of the proposition. Â The words and the good cheer behind them seem to be coming back, though, and in no small part because of the consistent stream of compassionate support I’ve gotten from readers here, both online and off. Â (I carry a glass heart in my pocket every day that made its way to me from Ottowa; I’ve received numerous emails from readers — two just last week — that have made every post this past year feel worthwhile.) Â

The good cheer is coming not a moment too soon, since I now have the pleasant task of trying to live up to the honor of being voted the Best Lesbian Parenting Blog of 2008 in this year’s Lezzies. Â This has done a lot to breathe life back into my blog writing life. Â So much so that I’ve been re-inspired to continue to earn the honor weekly not just here, but at LesbianFamily.org, where I’ve recently reformed my errant ways and brought the outstanding lesbian family blog listings up to date. Â It’s the least I could do, to express my gratitude and to feel like my online labor was worthy of the honor.

I wish I could say I knew which direction this blog will take over the coming year. Â I’d like it to return to being less heavily weighted toward the political battle, balanced instead between accounts of life with these children and reflections on how it’s all Â working, being a parent in between mother and father — the things I set out to try to explore when I started thinking out loud this way. Â A lot of sweet, quotidian reflection has been usurped by the drama of the marriage equality fight, but it was a fight that, for the sake of these very children, I (and many, many like me) couldn’t not throw my shoulder into. Â

One of the things I got into my thick head at the Prop 8 debrief the other night, though, is that this will continue to be an issue for a long time, win (we have a backlash to contend with) or lose (we face the next round of the battle). Â Telling our stories, though, and helping us see each other more clearly, with a more open heart: that will always be a part of it all. If I continue to be as fortunate as I have the past few years, so will you. For which: Thank you, gentle reader.