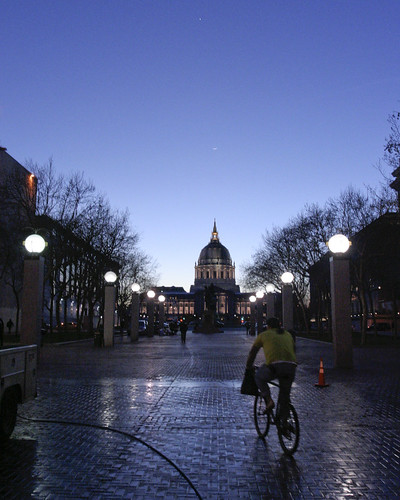 [Begun last Friday, interrupted by parenthood since then.]

En route to the Prop 8 debrief in San Francisco Thursday night. A fingernail clipping moon hung directly over City Hall, and high above that, a little to the south, Venus.

A be-suited man paused with me, as I held the camera up to my eye. Â I was just thinking the same thing, Â he said.

He asked me whether I was heading to the forum, and I smiled and said yes. So nice that we were each so easy to make out, he from underneath his suit, and I, from underneath my watchcap. We walked together and talked.

He put out his hand and introduced himself: Michael. I did likewise. I should have been surprised, but was not, that for the brief duration of our walk to the auditorium, we could jump right in and start talking about the whole Prop 8 rigamarole as if we’d been old chums — Â the campaign, the vitriol it inspired in our fellow Californians, the painful aftermath, mingled as it was with our joy over Obama’s election. The ambivalence and fatigue so many of us have as we dust off our clothing, mop our brows, check for bruises, and prepare to lurch back into the fray.

He lambasted the Mormon church for its hypocrisy with some indelicate but on-target criticisms, directed toward a number of time-worn practices and tendencies in the church. I might have been surprised, but was not, to hear he was raised Mormon. Many a gay Mormon refugee has found his or her way to San Francisco, the head of National Center for Lesbian Rights included.

Inside, we both saw chums, amicably exchanged cards, and parted ways. Up on the dias was our host/facilitator for the evening Andrea Shorter, And Marriage For All Campaign Director and the person who voluntarily organized the forum. Â Lined up at a table were two journalists and a string of the No on 8 executive committee who’ve shown up for similar other debriefs elsewhere (Equality California Executive Director Geoff Kors, National Center for Lesbian Rights Executive Director Kate Kendall, Task Force Field Director Daniel Hawes, Tawal Panyacosit of API Equality).Â The Bay Area Reporter account of a similar debrief at the NGLTF Creating Change conference sounded a lot like what we all witnessed that night;Â Michael Petrelis offers an account of our SF event here.

We heard a lot of what, by now, we’ve seen elsewhere in accounts of debriefs, analyses, or in the writings and speakings of members of the campaign. Â Campaign turned over to consultants: check. Executive committee not present enough in details of campaign: check. LGBT families conspicuously absent from campaign: check. Â Obtuse organizational structure, foiling a wide-open, broad-range of LGBT community support: check. Â Top-down, rather than grassroots-up: check. Â Inadequate or too-little-too-late coalition-building within faith, people of color, labor, and other communities: check. Â Apalling decision to not pre-emptively use the Obama position against the proposition, before the Yes folks found a way to misconstrue him on the topic (with ease, thanks to his confounding and ubiquitous insistence that he believes marriage should be between one man and one woman): check. Television ads egregiously, unforgivably absent of images of the ACTUAL LGBT PEOPLE whose lives the proposition was to have affected directly: check. Â Steve Smith, lead consultant from the firm they hired, acting like an arrogant @ss with whom I’d never, ever want to be trapped in an elevator: check. (Okay, I don’t know whether he was at the other debriefs, but the arrogant @ss part: for sure, check.)

News to me, and, based on the crowd’s reaction, news to many others as well: the TV campaign, which opened with parents of gay people, was to have “closed” with an ACTUAL LESBIAN WOMAN who’d been domestic partnered once and married three times (out of state once, then also 2004 and 2008). But in a meeting it was decided to scrap the lesbian ad and finish with another one. Â The two journalists on the panel pressed Mr. Smith: Who made that decision? Â It was the six members of the consulting group at the time. Â And it was a phone conference. Someone from the audience called out: How many gay people were part of that group? Mr. Smith thought, then answered: Two. Â How many women? Â One. Â The outcry in the hall was audible.

Panelists got across some significant points, though it was Kendall whom I listened to most carefully and with the greatest respect. Â She described herself as a (“pre-bong”) Michael Phelps “playing basketball in China. Â In other words: I was playing out of position.” Essentially, she felt that NCLR had helped win an historic decision, and she wanted to help protect it. Â 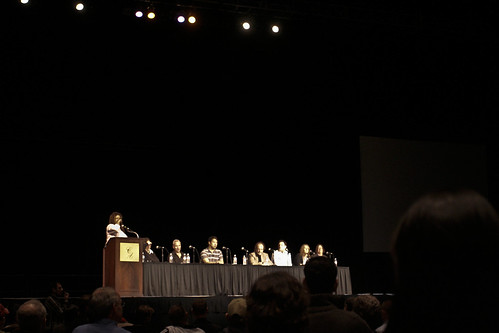 But she knew she wasn’t a campaign organizer, and she heeded the advice — often over her gut, and to her later regret — of the campaign experts. Â Other than conveying that she won’t be involved in any future campaigns, and that we must begin our conversations across the pro/con divide NOW, regardless of the Supreme Court decision, she conveyed one final thing here which friends who attended the Denver Creating Change conference corroborated she did there, too: Â she apologized. Â She was the only one up there who said, and more than once: “I’m sorry.” Â That took juevos. Â And though I’m happy for her swim team, I’m sorry she won’t be playing basketball in China, as it were, the next time around. Â I’ve said it before, and I’ll say it again: she is one classy dame. Â Okay, I didn’t say that exactly, but you know.

A generous open mic period followed the presentations, at which scads of very invested, very committed people spoke. Â Or shouted. Â Most spoke (and a few shouted) to the panelists; some, after turning their backs to the panelists, addressed the assembly instead. Â Susan Christian, co-chair of the Alice B. Toklas Democratic Club (and a Black lesbian) quoted the legendary Barbara Smith: “What I think is radical is coalition building across difference.” Â That, she made clear, needed to happen in this campaign, and didn’t. It must happen in the next one.

The spirit of Harvey Milk was very much in the room, I’m sure not the least because the spirit of Harvey Milk is still in evidence in movie theaters coast-to-coast, thanks to Gus Van Sandt, Cleve Jones, Lance Black, and Sean Penn. Â Many people who spoke at the open mic were folks who came to California during or soon after the instructive Briggs Intitiative campaign in the late 1970s, dramatized in the biopic Milk. Â One woman came here directly from the belly of the Anita Bryant beast, Dade County, Florida. Another speaker, queer labor activist Vince Quackenbush, reminded us all what Milk did back then: “Even if we lose, we gain by coming out!”

One of the last speakers at the open mic was Theresa Sparks, who had been schmoozing with her palÂ Mark Leno in the row in front of me for the duration of the event. Â She argued that we should have had “response” ads in the can, ready for the predictable moment when the Yes folks would exploit the age-old “protect the children” angle. Â “Where was the ad with the middle-aged white guy dragging his 8 wives up the steps of the Capitol?” Â (After the event, in an email, Michael wrote to ask whether I had a copy of the photograph I took as we approached Civic Center Plaza. He noted Teresa Sparks’ remarks, and said: “She made my Mormon argument with eloquence!”)

The last speaker whom I scribbled notes on said one of the most memorable things of the night. Â He (and I didn’t catch who he was) said, “A campaign is not a movement. Â You don’t have to ask for permission to speak, and you don’t need to speak from a script. Â A movement happens 24 hours a day, seven days a week.” Â Cheers all around. Â Here, here.

That’s what we have on our hands here. Â A movement, not a campaign. Â So. Time to get up and try to move again.

Short takes on the big break in the long fight