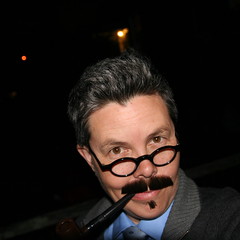 This year, nada. I dressed up as no patriarchal stereotype, good or bad; no cause célèbre. The kids wanted me to be Flynn Rider, from Tangled, but I didn’t pull it off. I was just an actual parent, trading off with the other actual parent, either doing circuits up the block with the kids, or stints on the porch doling out totally unhealthy sucrose products. We can’t hand out raisins because my beloved was raised by a Buddhist lesbian radical feminist hippie theater artist (who surely doled out raisins, or apples, or granola balls), and ours will be The House That Gives Out Raisins over her dead body.

In a feeble last-minute attempt at a costume I had duck-taped a large rubber tarantula to the brim of my baseball cap, but it kept slithering off the brim and plopping down into the candy bowl at inopportune moments which, though entertaining, was not the effect I was looking for.

In a feeble last-minute attempt at a costume I had duck-taped a large rubber tarantula to the brim of my baseball cap, but it kept slithering off the brim and plopping down into the candy bowl at inopportune moments which, though entertaining, was not the effect I was looking for.

Next door, my brother-in-law donned his regular Halloween Snow White get-up. For those rusty on the secondary character backstory here, he’s a 6’8″, bearded, loud-voiced, conventionally balding, football-watching guy. Who, also having been raised by the selfsame Buddhist lesbian radical feminist hippie theater artist, is as pro-feminist as they come, and can and will process his feelings with the best of them. Just let that sink in, and then slip that into a silken Snow White outfit and put a black wig on it.

When I was working the porch shift, I would periodically trot over to my brother-in-law at his station near his front gate, and flash a flashlight under his chin so as to heighten the overall effect. (No offense to my brother-in-law, but we really aren’t working with the Johnny Depp glam kind of drag here, way more the gender f*ck kind).

All the grown-up chaperones loved his outfit, and most of the kids did, too. I misjudged the capacities of one young Spiderman-clad trick-or-treater and did the spooky flashlight effect for him. After he froze for a moment, he declined the candy, slowly eased behind his mom’s legs, and said, “Snow White scares me.” Oops.

Not every young visitor was as innocent. A tween-aged boy, when he took in all of Snow White, laughed extra long, extra hard, and unambiguously derisively as he walked away, serving up a vivid portrait of precisely what is in store for anyone who f*cks with his already granite-chiseled notions of how women’s and men’s genders must be performed. Which, of course, didn’t originate with him.

Ridicule is an ugly thing to see at any age. In a craven world in which some punishment is doled out for those who don’t conform to “hegemonic” notions of masculinity, ridicule seems preferable over physical violence, which of course is the next alert level up from what this kid was dishing out. But suicide statistics among feminine young men (either gay, bisexual, or perceived to be) tell us that systematic ridicule and harassment can trigger as devastating an effect as a raised fist. (Here’s a fantastically comprehensive page of studies compiled by a University of Calgary professor of Social Work, if you appreciate a good study or so. Ok, upwards of 50, replete with hyperlinks.) 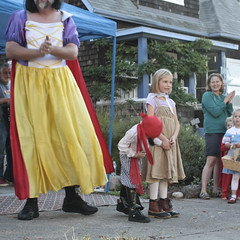 My son dodged a bullet this year, having opted to dress up as a pirate. There he is at right, taking a bow in the annual Halloween block party costume contest, with Laura Ingalls Wilder at his left, and Snow White, a natural emcee, at his right. (Last year my son was a princess in a gorgeous, pink, tulle gown.) I’ve written before about his evolving boyness, which for the moment continues to not be monolithic (here’s one piece; here’s another).

At seven and four, my kids already know that gender is better understood on a spectrum than with an either/or, mutually exclusive binary. They know: most people have either a boy body or a girl body, some have a little of both. That takes care of the biological/ sex part, for now. They also know that there are boyish boys, girlish boys, boyish girls, and girlish girls; they have people in their lives that occupy each spot on that (admittedly rough-hewn and chunky) spectrum, so it’s by no means theoretical. That takes care of the social/ gender part, for now.

The tougher lesson (the one I dread) is going to be the one about how harshly they may be punished, not just by something so abstract as “society,” but by people as specific as their immediate peers in their schoolyards and in their town, for deviating from “boyish boy” and “girlish girl.” And it’s going to take everything I’ve got to not want to go beat the tar out of the first kid, like last night’s gender policing trick-or-treater, who makes either of them cry, or worse. Which in one fell swoop would of course both defeat the point of redefining masculinity, and demonstrate how very hard it is to break out of prevailing cycles and do so.  Fortunately for me, Halloween’s once a year.