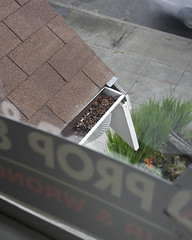 The other day a young couple was in the neighborhood looking for a place to start their family. Â There’s a lot to recommend our neck of the woods: easy walking distance to downtown and public transport; city parks a few blocks away. Â A Trader Joe’s is even being built nearby, a thrilling prospect to most Californians, though I think this couple would have taken exception to a place that sells birds as food. Â What with the couple being mourning doves.

The locale they were eyeballing was the gutter just outside my window (see at right). Â Our very ownÂ Nest Cam, I thought!Â  Live and in person! Â The lady bugs that overwinter in the room are awe-inspiring enough, and each year we’ve lived here I’ve spent minutes on end watching one after another make its way to the window, arch its little wing-shells, and fly away into the spring. Â This would be a whole bird family! I could watch the miraculous cycle ofÂ life, and drag my kids to the window to share in my wonder. Â That is, after the mating part. Â

Perhaps with the benefit of the glass between us, I thought, this Mutual of Omaha’s Wild Kingdom episode would have a happier ending than the squirrel incident which I’m pretty much never going to live down. Â A second bird joined the first, and soon the pair was waddling about, swiveling their heads and blinking their beady little eyes to get a good look around. I stayed stock-still as the mama dove settled into the spot that might be her bed. Â The papa dove returned from his brief reconnoiter around the immediate vicinity, and began to solicitously preen around her neck and shoulders. Â

Then I thought about the downside to the locale. Problem #1: it seems as if, in the event some of the gutter’s clogged leaves unclog, a perfectly laid egg might well get sent directly down the downspout like some ghastlyÂ Charlie and the Chocolate Factory surprise. Only waiting for the egg at the end of the chute would not be a vat of yummy chocolate, or a barrel of blueberries. Â Sadly, mourning doves being on the duncier end of the avian spectrum, I worry that this could go on for weeks on end, with neither of the couple getting a clue. Â

He: “Honey, what happened to the egg?” Â

She: “You mean it’s gone? I could have sworn I laid it right there!” 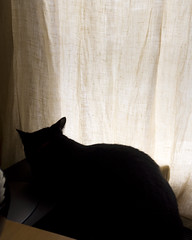 If that image wasn’t sobering enough, I then realized that Problem #2 would vastly overshadow Problem #1. Â Problem #2 being: our cat, Mrs Mooney (laying in wait at left). Â She uses the window as one of her primary in n’ out thoroughfares. (Yes, she’s named after the memorable character in the Sweeny Todd song; the beloved was directing Sweeny when Mrs Mooney adopted us. Feast your ears on Angela Landsbury’s choice performance of it, complete w/ Spanish subtitles.)

Soon after I heard the gentle “coo, coo” of the mama mourning dove as she ruffled her wings in the leafy gutter, Mrs Mooney heard them too. She came over to peer at the enticing scene, and Â I hastily pulled the curtains. Â For a brief few minutes thought I could actually successfully shoo the huntress from her prey. Â As if. Â I can’t even keep her off the counter, man. Â How am I going to police the frickin’ roof? Â Her frickin’ roof, I should say.

Zip! through my head went the gruesome scenario. Â My children would be perched at the window, remarking on the downy little feathers of the helpless chicks, say, while I fished around for ways to convey the complexities of animal world parenthood. Â

“Most animal families are headed by a male and a female, children. Â However, we must not overlook that same-sex couplings are widespread amongst socialÂ birdsÂ andÂ mammals, particularly the sea mammals and theÂ primates. When you’re older,” I’d drone on to no one in particular, “we’ll review Bagemihl’sÂ Biological Exuberance: Animal Homosexuality and Natural Diversity.Â But I think it might be best to start off with the endearing and true chinstrap penguin tale Â And Tango Makes Three.” Â

“Baba, you’re standing on my foot.”

At that very moment, Mrs Mooney’s feline machinations would reach their inevitable climax. Â Pounce! Cheep cheep! Feathers! Nature’s beauty, perfectly balanced by nature’s barbarism! Â Don’t look kids! I’d scramble to cover both their eyes, but too late, and the vision of horror would be emblazoned on the inside of their eyelids, coming back to haunt them, and therefore us, their sleep-deprived parents, night after night.

I pulled open the curtain I’d hastily drawn in front of Mrs Mooney. The mama dove swivelled her head around and I could see it in her beady little eye, a look that basically said, “Oh shit.” 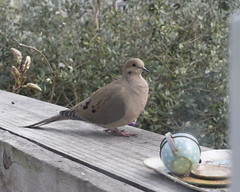 I darted off to get the camera, but by the time I returned, she’d already skedaddled (thus the empty nest shot at the top). Â Before she and her mate left the neighborhood, though, they took a farewell tour of what would have been their haunts, the highlight of which is a fantastically well-stocked porch. Â Â

He: “Look, hon. Â Fresh water in this dish, birdseed all over the place.” Â

She: “Yeah, and that nasty black cat. If I wanted a cock-eyed optimist I would have married one.”

First one fluttered off, then the other, with that whirring sound mourning doves make when they take off. Â I was sad, but relieved. Â I didn’t want to think less of Mrs Mooney for simply doing what feels natural to her. Â That would be terribly hypocritical of me.

A loaf of bread, a jug of wine, a truck bed, and thou

“If they know us, they don’t vote against us.”