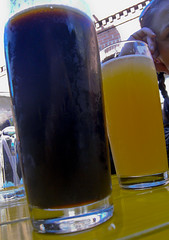 It was the documentary about the Broadway revival of A Chorus Line: Every Little Step, and the beloved ate it up like pudding. She’s been in the theater since she was a child actor (spawn of a stage actor/composer and a director/ playwright).  She has auditioned hundreds upon hundreds of times in her life, numerous of which in New York City, where she studied and worked for years.

For every one tear of nervousness and disappointment that was shed on the screen in the documentary, at least two sympathetic tears were shed in the theater by her. On top of which, she’s directing A Chorus Line for her youth musical theater company this fall and had just done a sing-through of the score earlier in the week. So I’m quite amazed she didn’t mutter “a-five six seven eight,” then thrust the bag of popcorn in my lap, clamber over me and bust into a combination, replete with pirouettes and high kicks in the aisle.

But no such explosion took place at the movie theater.  The vignette I refer to here happened at the beer garden before the show.  A member of the waitstaff walked up with our pints, and hovered for a moment, waiting for us to identify our orders. He was holding a porter in one hand, a lemon-garlanded hefeweissen in the other.  I looked up at him and said, “How can you even wonder who ordered what? I mean really! That–” I gestured derisively at the hefeweissen– “that’s like the Diet Coke of beers!”

Me looking like I do, and the beloved looking like she does, and this being downtown Berkeley, I pretty much could rely on the fact that he would stride right through the door I opened for him.

He grinned and said, “Hey, I can’t make any assumptions. You never know about people.”

The beloved said something or another trying to swat away the aspersions being cast upon the virility of her beverage of choice. Or its lack thereof.  She may also have admitted that she has been known to enjoy a Cosmo on occasion.

After the waiter walked away, the (hetero) couple at the table adjacent to us chuckled.  The gal leaned over, smiled at me, gave a little toss of her head in the direction of the beloved’s beer, and said, “I think the same thing.”  She had an amber beer in front of her, and her gentleman friend, smiling ear to ear, hoisted up… a hefeweissen!

I made the Homer Simpson “D’oh!” sound, put my hands in a supplicant position and said “Sorry, brother!”  Then hastily scootched my chair back, grabbed my ankle, and made an epically awkward attempt to indicate the placement of my foot in my mouth. I have a stiff knee from an old dance floor injury, and I don’t get to the gym as often as I’d like. But they got the idea.

Some more friendly razzing ensued, during which I reckon we all quite enjoyed being who we were where we were. They were a mixed race couple, ho-hum, nothin’ special. So what if a few generations ago they couldn’t have gotten hitched in this state? And he couldn’t have owned property?  Things are better now. And they’re going to keep getting better. Meantime, you can’t stop the good cheer from breaking out.

When our meal arrived, I got my comeuppance.  The beloved had her regular: chicken caesar salad. And what had I ordered? Was it a hunk of steak? Nope. A burger? Nope. Ribs? Nope. It was a spinach salad with salmon on it. Which of course the guy at the next-door table espied as the waiter cruised by.

He caught my eye, winked at me and said, “Pretty girlie salad, don’t you think?”