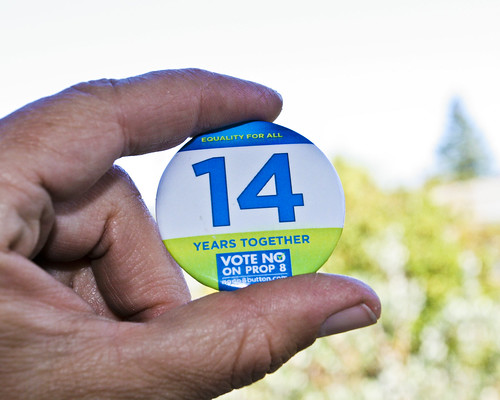 Today’s the last day this button is true.* Â Tomorrow, the beloved and I will have been together for 15 years. Â Fifteen!

I’ve had a very low output here at LD while I’ve been licking my wounds and refocussing my vision after the death of an old friend. Â There’s much I might like to say about the past fourteen years with my beloved, which has included far more strum und drang than I expected (I was planning on rainbows and unicorns, like all of us poor schmucks). Â Seems like life is, at best, equal parts sturm and rainbow. Â Some might even say you don’t get the rainbows without the sturms, but of course if they said that mid-sturm, they’d probably get smacked upside the head with a fish by some malcontent sturm-weatherer.

But anyhow. Â I may not muster much more than these brief notes. Â So IÂ will say that I have felt struck with a bolt of phenomenal good fortune for my beloved to have (a) crossed my path, (b) asked me out (some notes on our courtship and commitment ceremony here) and (c) stuck it out this long and made a Baba of me. Next best thing that ever happened to me, after her asking me out.

I’m also fortunate to be among those 18,000 same-sex couples who remain as hitched today as we were a year ago, when I wrote:

A day can go by, probably more now, after the fullness of kids, when we donâ€™t manage to hug or kiss one another. Â But we roll over and curl into one anotherâ€™s bodies in our sleep, expecting to feel some part of the other â€” ankle, waist, wrist â€” as much as we expect the feel of the sheets. Â Our love is no longer the spark in the air between us, itâ€™s the air itself. Â We are an old married couple, about to get married.

And tomorrow, we’ll be an old married couple, celebrating our first legally married anniversary. Thinking about old friends who don’t have what we have, but should. Appreciating every moment (or trying to), knowing that there but for the grace of — ? — go either of us. Â There, eventually, one of us will go. Â And then, after a time, the other. Â Meanwhile we pay as close attention as we can.

Do I get another ten years of this? If I do, I promise/threaten right now I’ll be singing this duet with her (me: Tevye, her: Golde; natch).

*Â Â I picked up a coupla buttons like this at one of the election day trainings, andÂ always thought that button campaign had a kind of poignant-pitiful supplicant tone to it. Like knowing how many years we’d been together would somehow make a difference. (We deserve our nuptial strife and discontent as much as the longevity, even if state protections may aid some aspects of the longevity part.) Â But did it help? Not enough. Least wise not this last time around.