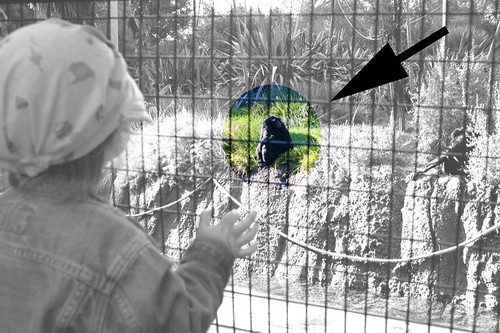 The zoo was a drab sepia, but for the lone, might-poop-if-we-wait-long-enough monkey. Who was actually not the Ancient Mariner referred to in the title above. Read on.

We met the Ancient Mariner the other day at the zoo. The lilâ€™ monkey and I went there in hopes of revisiting the phenomenally memorable monkey-going-poop! scene that so transfixed her the last time we were there. We were meandering slowly past the various other primates as a warm-up to the main attraction, The Pooping Monkey, so as to (a) draw out the dramatic tension a bit, and (b) provide sufficient alternative zoo-going value, should we find that every single last primate had somehow already dispatched with its digestive duties.

We came up to a woman and her young son in front of the Black Howler Monkeys. As we approached the railing, my lilâ€™ darlinâ€™ repeated the refrain that had been her mantra since we stepped foot in the zoo that morning: â€œIâ€™m — gonna — see — the — monkey-going-poop!â€

A tense moment passed, during which parent A (in this case, me) worries and wonders whether what parent Aâ€™s kid just did or said was egregiously offensive to parent B (in this case, her). Scatological references exist in a gray area, decorum-wise: every kid makes â€˜em; itâ€™s a natural phase of early childhood development (out of which some folk of course manage never to fully emerge). No matter how feces-averse one might be, as the kidâ€™s chief potty-trainer one is obligated to refer to the whole process on a fairly regular basis. Looky, Daddy!, whom I’d-a nominated as one of the best parenting blogs, had I read him earlier, wrote a wonderful piece on it here.

Per usual, my worries were overblown. The woman was not at all offended at the potty mouth on my kid, but rather impressed at the fine elocution with which she delivered the potty mouth-ridden sentence.

“How old is she?” the woman asked, after complimenting the lil’ monkey on her diction.

We struck the easy, strangers-in-public kind of connection that early parenthood affords. It’s a total boon, and it’s been utterly unexpected. It’s like you’re travelling in a far, distant country, and you bump into people from your own country. It’s so natural to reach the hand out and say hello. Ask about how their trip is faring, where have they found the best tapas, what have you. They may not be from your very part of your country, may not be headed in the exact same direction as you, but your shared journeying gives you a kinship.

We chatted about our kids, their development, the zoo. After a time she asked, “How do you like… motherhood?”

The pause was only momentary, but I figured it to represent the cognative tension that she might understandably feel, addressing a woman parent who resembles much more a father than a mother.

“I totally love it! It is a total blast. All I would have hoped for and more. Love it so much we’re about to have another.”

She smiled a half-smile, with a question lingering in her face.

“I mean, I didn’t do all the hard work,” I said, involuntarily making a crude hand gesture indicating some combination of birthing and baby-catching. I believe one is either an involuntary hand-gesture-maker or one is not. I no longer try to fight the impulse, and am instead directing my energies to coming to terms with it. Call it a kind of Gestural Tourette’s.

“Aaah. Well,” she said, “my birth was very hard.” And thus launched her story. She had enormous complications with the birth; ruptured her liver; remained hospitalized, along with her newborn son, for weeks; took six months to recover, as a result missing all the early “moms’ groups” bonding. Her stories of her time in the hospital brought me effortlessly to memories of the imuno-compromised floor of our local Children’s Hospital. Because the first six months of our child’s life were the last six months of my nephew’s, and for very different reasons, I, too, missed the early moms’ groups bonding.

She asked me if I wanted to see her scar, and before I could say “Sure” (how else does a tactful person answer that question?), she pulled up her sweatshirt to show me. Yow. I have seen a number of cesarian scars, and this one knocked them all out of the scar ballpark. I was only glad that my eight-months’ pregnant sweetie was not witness to the vision.

I said nothing to her about our own birth experience. How could I? Our midwife said my partner was “midwife candy,” and claimed it looked like she was giving birth to a “stick of warm butter.” Baby-birthing hips and an opera singer’s lungs paid off big time. Plus of course we were simply and purely blessed.

The woman went on to talk about what a strong impact the birth and its aftermath made on her experience of motherhood, how deep the scars still are, how much her son bonded with her husband in the absences caused by her long healing process, and how he still connects so much more easily with his dad. Similar, in some ways to my own feelings of subordination, yet so, so different.

She intercut her story with further questions about ours. How did we do it, etc. (I seem not to mind answering the most forward and plumbing-specific lesbian conception inquiries, having worked first as a retail clerk and later a teacher: the impulse to be helpful and explanatory just bubbles out of me unchecked. Others are more flummoxed, which I’m sure I should be.) I talked about how sweet and low-tech it was : the partner of an old friend was our donor; an artichoke jar was our conveyance, along with a kitty medicine dropper purchased at the drug store; we conceived during the first ovulation cycle both times.

Another cloud passed across her face. Not ony was her birth essentially a trauma, but she and her husband had moved heaven and earth to get to it, ultimately resorting to IVF. It is a special path that would-be parents walk, we who work so hard to get it to happen. It is of course the de facto condition of all LGBT parents, but we walk on it with many others.

We talked as we walked, all the way through the primates, long enough to wait and wait for the monkey to go poop (s/he did not), then on to the reptiles, and more. We exchanged contact information when we parted, since she continued to feel so isolated. There was something familiar, I think, and I would hope comforting to her about how atypical my parenthood was. We are none of us the only one.

Later, I saw her again across a grassy field before we left. She was deep in conversation with someone else.

The Wedding-Guest sat on a stone:
He Cannot choose but hear;
And thus spake on that ancient man,
The bright-eyed Mariner

9 thoughts on “We met the Ancient Mariner at the zoo”