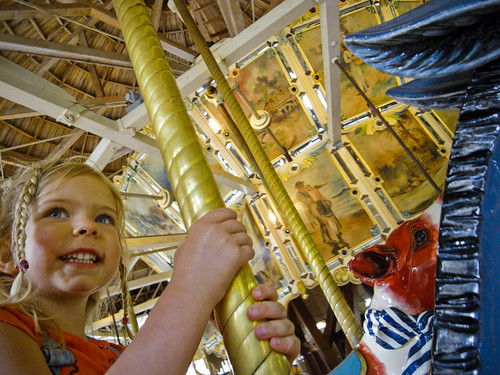 Talkin’ about the economy, talkin’ about national presidential politics, talkin’ about Baba’s state of mind. Not like you needed to have this spelled out, but menopause + the current economic and political drama = wild toggling between Baba’s paired impulses to either FREAK OUT! or CALM DOWN!

Since I’m still in Work Deadline Lockdown for at least another week, I’ll flesh out the meager content here with a YouTube video whose title matches part of the post title.  (“It was weeks and weeks of Prop 8 harangues and infernal YouTube videos! I couldn’t wait ’til election day and she started to post proper essays on a range of topics again, like a normal person!”).

The infernal YouTube video below is the 1984 glam metal song “Round and Round,” by Ratt. It has no more thematic connection to today’s post than Tuesday’s Sarah Silverman – “Great Schlepp” video had to Tuesday’s. Except you could focus on this one line in the song that’s kind of cheery, when construed to be prophetic about Obama’s election: “I knew right from the begining/ that you’d end up wining.”

Polls do look to be leaning in that direction.  A national economy in the crapper sure seems to help.  But the jury’s still out on Prop 8; all’s we know is that the Mormon Church is pouring ark-loads of money into the battle, over a third of the Yes on 8 funding, if you believe them and the Wall Street Journal.  And Yes on 8 is still out-fundraising No on 8 at a rate of about 3:2.*  Which means, if the proposition wins, we may as well all just cut the middle man and have the Church of Jesus Christ of Latter-day Saints re-vamp all the state’s laws to their liking.  Save a lot of money that way. No muss, no fuss.  Fundamentalism & church-state merging is all the rage anyhow, world-wide.  What’s the point in fighting it?

Either that, or my fellow citizens will vote their hearts, which have been steadily opening over the years, in spite of all the scare tactics malarkey.  (See?  You can take this whole post as Exhibit A in the case for Baba’s FREAK OUT/CALM DOWN vacillations.  I think we should all be glad I don’t have time to write for the blog as much this month.)

Now let’s whiplash back to the meaningless video, shall we?  If you really are about to watch this random glam metal early 80’s hit, do look out for Milton Berle’s double cameo as both disgruntled rich guy and disgruntled rich guy’s wife. I always thought he was the uncle of one of Ratt’s performers, but it turns out he was just the uncle of the band’s manager at the time. Thanks again, Wikipedia: the lazy researcher’s friend.

* [That’s in spite of the BANK which the LD Love Train is sending into the fray.  Enough to buy one oar for the LDS ark.  We might not have reached the initial $5,000 goal yet, but we’re still the BIGGEST CONTRIBUTOR among the grassroots No on 8 fundraising webpage folks.  Proud? You should be!]