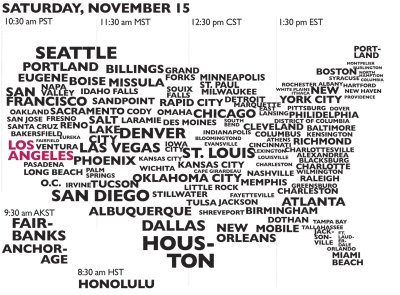 Image above is from Jeanette LeBlanc’s Flickr photostream, who pinched it from Joe.My.God.  Image originally espied in Terrence’s post (noted below).  We’re all one big happy poaching open source queer family.

National Protest Against Prop 8 [and for LGBT civil rights]

Saturday, November 15, in the times and places noted above

An open letter to the community, from Kate Kendall, Exec. Director, National Center for Lesbian Rights, and a host of co-signatories.  Kate prefaces the letter with some notes, including what should be an article of faith for all of us: “The most powerful antidote to hate and misunderstanding is love and compassion and dignity.” The letter is online (here, at the NCLR Press Center), but I want to pass it on in its entirety below:

We are on the cusp of a new era as our country has elected its first African-American president, Barack Obama. We hope this unprecedented event will usher in a new chapter in our nation’s history.

This past week has been a difficult time. With the passage of Proposition 8 in California to change the state constitution to eliminate the right to marry, our community has experienced a difficult defeat. We are angry and upset by the passage of Proposition 8 and the betrayal of the promise of equality that has been the hallmark of the Golden State. Yet, we know that this is only a setback in—not the end of—our journey toward full equality for the LGBT community.

It is natural to analyze what went wrong. But in recent days there has been a tendency to assign blame to specific communities, in particular, the African American community. The fact is, 52 percent of all Californians, the vast majority of whom were not African Americans, voted against us. In addition, the most recent analysis of the exit poll that drove much of this speculation determined that it was too small to draw any conclusion on the African American vote, and further polling shows that the margin was much closer than first reported. Most importantly, though, none of this discourse changes the outcome of the vote. It only serves to divide our community and hinder our ability to create a stronger and more diverse coalition to help us overturn Proposition 8 and restore full equality and human rights to LGBT people. It also deflects responsibility from the group that is responsible for this miscarriage of justice: The Yes on 8 campaign. They waged a deceitful and immoral campaign that brought about this violation of our human rights and dignity.

We as a community have come so far. Let’s not lose sight of this. Since Proposition 22 passed eight years ago by 22 percentage points, we have made our case to the people of California. We have talked to our families, co-workers and friends about what true equality looks like. In so doing, we have narrowed the gap substantially since that time. And, in the last week, we have continued to move forward with a great wave of non-violent protest and a strong and powerful legal case put together by some of the keenest legal minds, supported by the governor, our senators and many other elected officials in our state. Moreover, we have seen a great national movement growing in support of equal rights for the LGBT community as a result of our actions in California.

We are hopeful the election of Barack Obama signals a new spirit of collaboration among diverse groups of people. There are many allied communities—straight, African-American, Latino, Asian Pacific Islander, people of faith, and secular people—who are energized to join with us as never before. This is progress! LGBT people are a part of all those communities, and with the support of our straight allies, we know that justice will prevail.

Dr. Martin Luther King Jr. said it best: “The arc of the moral universe is long, but it bends toward justice.” Now is the time to come together as one community working together toward human rights and full equality. We are confident that with our growing coalition we will ultimately win this fight.

A post from Terrence Heath, who writes at Republic of T. and is a diarist at Pam’s House Blend (and probably countless other places).  He has put together a brilliant quilt of ideas and images regarding anger and social change, titled “First, You Get Mad.” (This is cross-posted at Pam’s too).

Each one of the ballot measures that passed deserves our public outcry. [Ed note: Here’s an NCLR page summarizing the AK, AZ, CA, & FL ballot initiatives; includes links to each state’s campaign to fight them.] Each one was supported with defamatory and scurrilous messages that falsely equated homosexuality with endangerment of children. And each one amounts to insult and injury to our humanity and to our dignity.

I’d also like to let you know how we are taking action and responding at the Task Force to Prop. 8 and the other ballot measures. Here’s where we are at so far:

Finally, if you do plan on participating in the National Day of Action, I ask only that you participate in these demonstrations with this in mind: Our movement for social justice rests on the understanding that, over time, people around us can change their hearts and minds about LGBT people.

To that end, it is important that our demonstrations of anger and frustration remain peaceful and nonviolent. By nonviolent, I mean physically nonviolent, but also nonviolent in speech toward those who disagree with us.

You might read and consider signing NGLTF’s  “Anger into Action Declaration.”

[Ed note: may be tempted to add more.  But let’s just start with this.]