[Day four of Robin’s Some/thing old, new, borrowed, blue funfest, in honor of Freedom to Marry week. Lots of folks have joined the party — take a peek. Many thanks to Robin for a delightfully inventive idea.]

My grandfather’s bench. That’s what I’m going with, for something blue.

(I highly recommend your firing up this snippet of Sir Miles’ classic, and reading this post with it as accompaniment. Did it up in its own window, special for the occasion. It just might last you through the entirety of the post, if you read fast and don’t let yourself get too distracted by the link to the Bower Bird.) 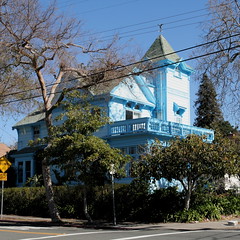 I could have taken the “blue” theme in a lugubrious direction, and waxed on about the sorrow and misery that has collected around our door in recent years. Loss, loss, loss. Much to be blue about. But I spend plenty of attention, blogular and otherwise, on that stuff. So I decided — perhaps because the sky was so blue this morning — I should flit and frolick in a more chipper direction.

I wouldn’t have skipped more than a few blocks in this direction before I’d have bumped into the 130 year-old Flagg House (pictured above right). As you can see, it is done up in ALL BLUES. And no, I don’t think any descendents of Miles Davis live there, but I can’t be sure; I’ve never seen anyone walk in or out after walking past it for the two and a half years we’ve lived in this neighborhood.

They’re very committed to the color, as you can see in the image at left. Blue bottles of every imaginable shape and size line every window. Human Bower Birds, they are.

I always did find the Bower Bird fascinating. To attract a mate, the male Bower Bird meanders about the countryside, scavanging for things that are blue, which he’ll bring back to his bower, for interior and exterior decor. Feathers. Candy wrappers. Milk carton tops. Had I not snagged my beloved by other means, I might have tried this (other means being: a fortuitous pastiche of Women’s Studies lectures, unpermitted Dyke Marches, boogying on the dance floor, and staffing the right Lesbian Avengers kissing booth at the right time). I do like the color blue. So much so that I painted my trusty lawn chair blue, pictured above right. It’s one of my all-time favorite yard sale finds. See? Wouldn’t you like to park your arse in this thing daily? 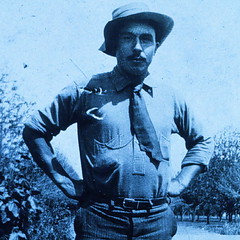 But the “something blue” I decided to go with, since it is likely the blue object with the most emotional significance to me, is my grandfather’s bench. He made it probably fifty years ago, for the grounds of the home he built and retired to with his wife. They’d never owned a house before, and he had worked since he was a lad for the U.S. Coast and Geodedic Survey, making maps in the Pacific Northwest and the Phillipines (there he is, at left, when he was Captain of the “Matchless,” which, though it was a Coast Survey ship, actually sounds like one of the cows in Cold Comfort Farm).* Having a proper bench on which to settle one’s “fundament,” as my Pops calls it, was critical. Particularly because my grandfather prized his garden, and therefore one had much to contemplate, as one sat and looked.

He worked about as hard as you might imagine the son of a German circuit-riding minister from South Dakota would work. He had a stern countenance, but a gentle spirit. Or so I recall. He had lost his voice by the time I was a kid, not in the laryngitis way, but completely, in the laryngectomy way. Spoke with this device that he placed over the hole in his throat. It made a humming sound, and he mouthed words and what came out was not very much more comprehensible than the worst computer-generated “voices” from like the late 1980s. I recall being a little intimidated, but the jokes he would write down on a little chalkboard all made it better. 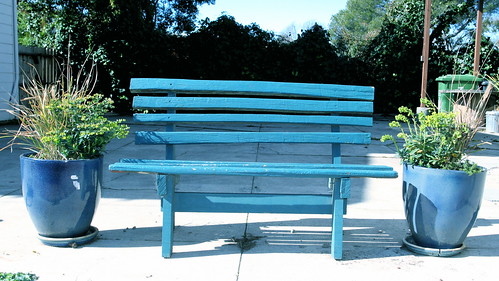 He attended to the details of this bench much the way he had labored over his maps. He meticulously measured knee-to-butt lengths, and also made sure to cut the redwood strips in such a way as to curve gently, to accomodate the hiney and the back. My dad obviously appreciated the loving care that his father put into this bench’s construction, since he was the one who pointed out its various design features and the story behind them. Now I point out these features to anyone who pauses for even a moment to look at the bench. I rescued it from obscurity in my grandparents’ garden, decades after they had died. The home and its grounds had become a storied quasi-commune, housing avant-garde musicians and students attending the nearby college.

I carefully dismantled the seat and back crossmembers from the frame, which had rotted beyond structural integrity. Then I re-cut the frame wood, taking care to preserve the same graceful curve that led the back to tilt just right. Then I reattached the crossmembers, thinking about my father and my grandfather all the while. Finally, I painted it my favorite color.

Don’t know if DadDad (as we called him) would approve of it turning blue. Don’t know if he’d have approved of me being a big ole mannish lesbian, either, come to think of it. On my hands and knees, in work pants and his son’s old work shirt, wielding a cordless drill (which is blue, of course). Then again. He had a stern countenance, but a gentle spirit.

* Actual cow names: Graceless, Aimless, Feckless and Pointless. You have to read the book, or better yet (!) watch the movie.

The tenacity of hope

5 thoughts on “Something blue”