Photo by David Rae Morris, part of his gallery “Mr.G. and the Rev.”
Posted on the Lagniappe page at his site.

â€¢ The beloved heard this commentary, “Dear New Orleans: I’m Leaving You,” by Eve Troeh on NPR the other day. Eve said,

Now I’m a jilted lover of the city. I’m angry and confused. Which is the real New Orleans? The one that’s violent and desperate? Or the one that coos softly, and caresses me? The answer, of course, is both.

Here’s the rest of it in print form. 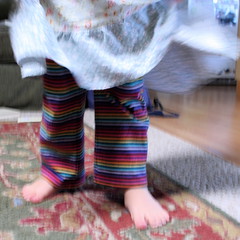 â€¢ This morning our daughter wanted to wear her Uma Rae pants, which may, or may not, have been worn by my dear friend’s daughter the day they hauled all their most precious belongings out of the city in advance of Katrina. They only had room for one of their two cats; the one who stayed survived the storm, but wandered away to die with dignity on her own, of old age, about a year later. The other was killed by a dog some half a year after that. Both seem like apt stories of the Upper Ninth Ward, their home.

Uma Rae has grown out of the pants, two years later. Today they fit our girl like a glove.

â€¢ That same friend packed up her New Orleans life a few weeks back and moved North to Ohio, to a new job and a new life with her family. The irony is bittersweet, given her partner’s dad, native son of the south, wrote a legendary book with the title North Toward Home. She sent us a box of hand-me-downs before they left town for about the same exact reasons as Eve Troeh left, thankfully minus the personal attack. I can’t imagine the mix of feelings in her heart today. Relief/sorrow/relief.

â€¢ Meanwhile, far to the west of the Mississippi delta, my sister’s son had his first day of school at my elementary school alma mater. Same as any first day of school, perhaps, with one stark exception: the last time he was at that school, it was weeks after his ten-year-old older brother’s death from brain and spinal cord cancer. I escorted him to his classroom as my sister stood in the playground, standing with her arms folded across her chest, talking to other mothers.

Her going to school that day — the epicenter of support for her family during her eldest son’s cancer battle — was one of the most courageous acts I’ve ever witnessed in my life. Most every other breathtaking act of courage I’ve seen took place in her home or sometimes our local Children’s Hospital during the previous ten months. Usually it was her. Her hair is nearly all white now; she’s forty-six.

Since that time, for just over two years, the family has been in Scandanavia, where both boys and their father were born. This summer they have finally come back to resume their lives in the house I grew up in, in the town my sister and her surviving son call home.

On the phone last night, I asked my nephew about his first day of school. He said he recognized some of the faces from Kindergarten. He said that his best friend from the old neighborhood is in his class. He said they ate together at lunch, and jogged together at P.E.

“But we didn’t talk much,” he said. “We needed to catch our breath.”

6 thoughts on “Dispatches two years out: leaving and coming home.”