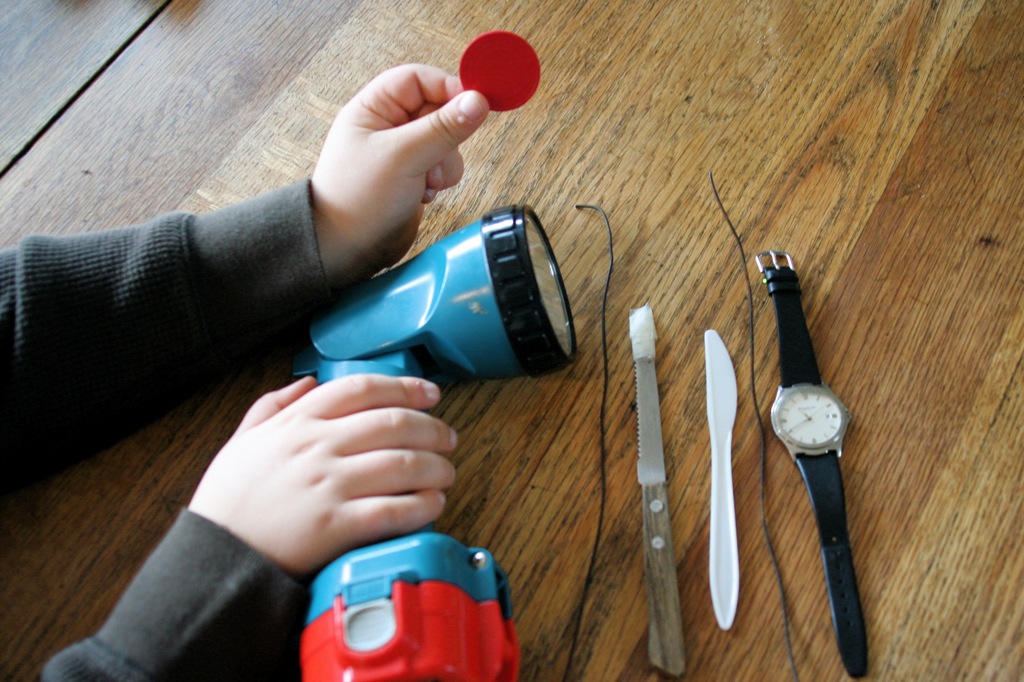 That would be “MacBaba” as in a take on MacGyver, by the way. Not as in a take on MacDonald’s, since you know they’d sue my hiney the second they ran across “MacBaba” floating quietly about the World Wide Web. Everyone’s favorite sushi joint in SF’s Mission District, We Be Sushi, is so named because they started as MacSushi and then got popped with a lawsuit by Mickey-D’s. The owners opened up the re-christening process to their customers, and We Be… came in first (If You Knew.. was a contender, along with many others, printed on the backside of their menu).

Now back to more important matters. I think the above pictured get-up is a lot more sophisticated than the one employed for the salvaging of the straw from the cardboard soy milk container, humbly outlined here. Yesterday’s challenge: POKER CHIP IN BOWELS OF DVD PLAYER, courtesy the lil’ monkey. The motivation for home-spun extraction: savings of, in order of importance, (a) face, if I had to get my brother-out-law to dismantle the unit to remove it; and possibly (b) money, if he couldn’t, and I had to haul the rig to some shop for someone else to snicker at. Added bonuses: (a) the fun of it all; and (b) the establishment of a metaphor I was able to use later that same day, during a conversation with the beloved nephew (age: 8 yrs) about gay marriage fights.

He brought up the topic. We were pausing to let some pedestrians cross, and I remarked how much I enjoy doing that, since so often so many cars whizz by. I like to be among those who stop. He then asked, “What would you do if President Bush were in the crosswalk?” My answer: slow down and let him cross safely, the better to show him the kindness he has a hard time showing people like me. Beloved nephew got the logic effortlessly: You don’t teach unkind people how to be kind by being unkind to them. “Then you only just prove that the bad things they thought about you were true,” he said.

He then brought up the gay marriage debate. After I tried to make sense of it to him via its parallel with the fights over misegenation laws a scant forty years ago, he said, “I heard that President Bush would want to take [my kid’s name] away from you.” I looked at him, and first clarified that it wouldn’t be exactly like that. Though I did note there are plenty of states in the union we will never spend a red tourist cent in, lest an accident happen somehow and a custody challenge ensue.

Then I added: “But even if he could, that would never happen. You remember how much determination I had this morning to rescue that poker chip? That ‘Never give up, never surrender!’ attitude? It’d be like that, times a million.”