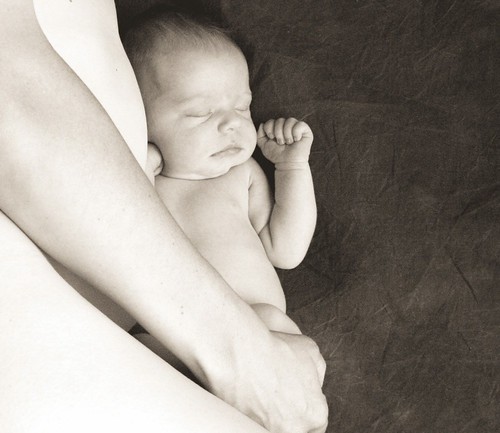 Nine months and two weeks’ worth of our daughter, September 2004.

We had the great good fortune last night to attend a performance of Chanticleer, the men’s choral ensemble. Every December the San Francisco-based group finishes up a national holiday touring schedule with local performances. Thanks to the devotion of the Gramma and the GrandBaba, our extended family is making it a seasonal tradition to attend their performance at the First Congregational Church in Berkeley.

Listening to the perfection of their voices, both as soloists and as a seamless choral whole, it’s hard not to hear the divine. To me, though, this is not so much a theistic divine, but a spiritual connection to the ineffable for which some people can make themselves vehicles.

When I finally heard soprano Kiri Te Kanawa in recital, I heard the same thing: sonic perfection, for which the singer was not originator, but vehicle. For the first of several encores, she sang one of Strauss’ Four Last Songs (her recording of these made me fall in love with her voice twenty years earlier). At one point she was holding a note, and for the duration of that held note, the entire hall was transported. It felt like it was no longer Dame Kiri who was singing, but the note itself, and we all, for those moments, were experiencing the sound, A-flat, in its breathtaking perfection.

My beloved saw Baryshnikov dance in New York in the early 1990s, and thought the same thing. She — then at The Neighbhorhood Playhouse and an ardent student of artistic accomplishment — realized while watching him that he had polished his technique to such a brilliant sheen that he was capable of transcending his own individual genius, becoming instead a vehicle for something larger than himself. The dance. The human body. Neither one the sole posession of the dancer.

It’s hard to describe, but it makes sense to me.

I’ve never attempted the performing arts, as an adult singing for only a short time with a community-based women’s chorus. I know we never approached the burnished perfection of Chanticleer, but each time we sang at least I was transported. My favorite song was a version of Sweet Honey in the Rock’s “On Children,” a treatment of the Khalil Gibran poem.

In a dozen short lines, this poem manages to convey something which is as close as my beloved and I have to a roadmap for our parenthood. It helps us immensely that our children could only come to us with the help of others. Our children are not only our children, even if we may manage this legally and socially. We know we do not posess them. They are — as are all of our children — each their own perfect song. Divine.

Here’s a link to the Sweet Honey recording courtesy Ritualwell.org (Music by Ysaye M. Barnwell, Â© 1980 Barnwell’s Notes Publishing; recorded by Sweet Honey In The RockÂ® on “Selections.” Used by permission of the composer.) The text below is Sweet Honey’s, imperceptibly tweaked from The Prophet.