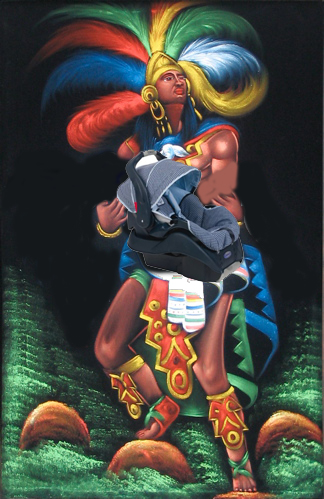 The careful observer will note that this Aztec warrior is not bearing a fainted virgin in his arms, but instead an infant car seat, a far more precious and mysterious treasure. Actual original here.*

The other day, when all of Christendom was gathering around their various hearths, slogging back wassail and singing songs of joy and cheer, I was outside wrestling with the infant car seat. I had been e-dykelated once before, and it wasn’t going to happen again.

For the uninitiated, “e-dykelated” is a custom reworking on “emasculated,” and it can happen to any gal like me who is lacking in mastery of all the manly arts, but who still aspires to one or two of them. Proper assembly and installation of kid-related equipment (car seats, cribs, high chairs, etc.) rank toward the tippy-top of the manly arts, parental subsection. So quite naturally I am highly motivated to triumph over everything whose box bears those three most feared words in the English language, Some — assembly — required.

Back when my sweetie was ready to burst with kid #1, I had done my best to install the infant carseat we’d inherited from her older brother, whom I lovingly refer to as my Know-It-All-Brother-In-Law or, for the Acronym Oriented, my KIABIL. I didn’t have benefit of the original installation instructions (hey, you don’t see me complaining, do you? it was gratis!), so I asked him to inspect the job I’d done. He gave it a looksee, and then — sweetly, not at all ham-handedly — suggested that I’d want to actually strap it in properly, lest we chuck the newborn into the front seat with a sudden stop. Wilting with mortification on the driveway, I watched him lean in, kneel on the seat, fiddle with the various adjustments, and actually do it right.

My KIABIL does know a lot, is the problem. He’s also 6’7″, a triathlete, a former carpenter, and an accomplished execu-dude. And he’s hirsute. Most places. So no one raised in this century or any other, on most contintents on this planet, would espy him and think anything other than that he must be accomplished in most all of the manly arts. Which he is. The fact that he’s also a great cook and a major league pro-feminist is simply icing on the manly cake.

You can imagine my exquisite torture, then, as a gentle-manly dyke who lives upstairs from him (our two families share housing). For 24 hours a day, there is always someone on the premises who actually can fix that. Whatever that is. Before, when my sweetie and I lived in obscure isolation in our own separate home, I could do whatever I pleased to anything, using duck tape and paper clips and rubber bands, and she’d exclaim over the masterful repair job I did. (Feast your eyes on Exhibit A.)

Now the standards are higher, and I’m feeling the pressure.

So the other day, the journey I took with the infant car seat was one I had to take alone. The installation dragged on five, maybe even ten times the amount of time it would have taken my KIABIL. But god love me it’s in there, and kid #2, when he emerges (yegods it could be ANY MINUTE!! why isn’t EVERYONE panicking?!!), will not be pitching anywhere. Not on this Baba’s watch, no sirreee.

*Filling the walls at my favorite taqueria during my high school years were beautiful black velvet paintings of Aztec warriors in various states of masculine accomplishment, usually atop mountains, often with freshly killed cougars underfoot. Ever since then I have aspired to some reasonable facsimile. Minus the dead cougars.