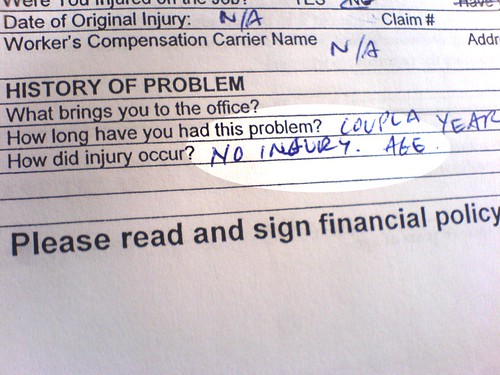 Pops’ intake form at the orthopaedist’s.

Last week I took my Pops to the orthopaedist’s to figure out what’s the story with his 85-yr-old knee bones.

(Q: And this relates to lesbian fatherhood how? The flip answer: I’m a lesbian; he’s my father. So there. The real answer: What I learn from him has a great deal to do with how I approach life, therefore parenthood.)

We were trying to find the office, and he was plubming the increasingly murky depths of his memory to tell me the location of a nearby landmark, from which we’d get our bearings.

Pops: “It’s right across from the hospital, where the road bends.”

Me: “That’s where it used to be, years ago. But remember when we went there a few months ago? Now it’s down the street, past the next intersection.”

If it really is Alzheimer’s, and not some ordinary degradation of memory due to age, it’ll take a long time for us to notice, since he elides so many such slips of memory with humor.

We both smiled for at least two blocks.

After which I got to thinking: I’ll have to crowd “a fertile sense of humor” into that list of top parental qualities I was compiling a week ago. So we now have:

Being just a touch obsessive-compulsive, I am unsettled by the fact that this list is only four items long. Five, or better yet, ten, would round it out nicely, don’t you think? The mike is open.