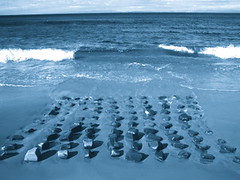 In celebration of the 100th post, part five in a ten-part series.

[Warning A: Jumbo post alert! Warning B: Of little interest to anyone who didn’t ride the Weblog Awards roller coaster last week! If you didn’t, please check back in another day or two for actual content! content! content! If you did ride, and have an itch to scratch about it, read on!]

As a way to put the 2006 Weblog Awards rollercoaster ride in some perspective, I thought it might be useful to come up with some steps about how to build a better Weblog Awards system. Not that there aren’t enough bright ideas hopping about in the animated Weblog Awards Forum. But I got five more of these lists to get out, man. And I reckon I’m not the only one that suspects a different story would have unfolded, had this — and all the other finalist blogs in all the categories — had competed under a different set of rules.

Imagine my surprise, as I was rooting around the web for alternative examples, when I discovered rival weblog awards! Blogular rookie that I am, having begun in earnest only this past spring, I was utterly unaware of them. One existing award is international (the BOBs), another is older (the Bloggies). Another (The Webbys), includes a few blog categories in a survey of the web far, far beyond the blogosphere. Two split their awards into juried and “User Prize” winners (the BOBs), or juried and “People’s Voice” awards (The Webbys). The Bloggies employs a jury selection to get blogs to the finalist stage. All are designed to keep the mass voting hysteria in check by attempting, in one way or another, to limit the quantity of popular votes.

If it’s pure quality product you want to suss out, if you want some way to determine excellence in a blog, then a popular vote contest isn’t going to reveal anything more than (relative) popularity. If you’re looking for something else, I offer for your contemplation these

1. Strive to reward excellence, while admitting from the outset that “excellence” is a fairly subjective thing and that no two people are going to be completely satisfied with a rubric by which to judge it.

2. Try to determine a rubric anyway, responsive to the features that define or characterize blogs as a distinct medium of communication. These might include such things as: quality and originality of content; value of content to intended community; quality and originality of graphic design; elegance of user interface/ readability; appropriateness of design interface to blog content; presence and liveliness of dialog with intended community.

The Deutsche Welle International Weblog Awards, called the Best of the Blogs (or BOBs), use the following guidelines, published on their Criteria page:

Creativity: Originality of topic, humor, use of new style elements.

The aspects listed above are not a comprehensive list and should be used as general guidelines for the jury’s decision.

Most blog designs are turnkey, and most amateur bloggers work fairly modest variations on a standard template. This one is a typical example: I use WordPress’ K2 with almost no fancy customizations, except for the header bar; my contribution to its overall design is to attempt to keep some color consistency, and to break up text in the links column with the occasional image or graphic. (That is, to the extent I can figure out how to pry into the WordPress template without derailing it.)[Ed note: July 2008 I actually did spiff it up, with the help of others. So there.] Design judgment under these circumstances entails the splitting of hairs over how bloggers make use of existing templates. For this reason, original template design should be especially rewarded.

3. Determine the most reliable means by which to measure a blog’s relative success in these various realms. This would be a very hard thing to do, since much of the design and content judgments would be so subjective. Some relatively objective measures of a blog’s impact and worth within its intended community may be measurable via tracking such things as its user comments, its incoming links and traffic. Another measure would be the amount and way in which a blog is referred to on other blogs. And while there’s no accounting for taste, many can agree on essential standards for sound design and usability. Jakob Neilson, usability guru, has provided some usability standards for blogs that could provide a basis. (Even if the aesthetics of his own sites fall far short of the ideal.)

4. Subject that rubric to a wide, democratic, wiki-like review and revision, by those who make up the community to whom this measure of blogular excellence matters.

5. So that step #4 doesn’t devolve into chaos, fix the period of public review to limited time, and delegate the final determinations on the judging rubric to those who would also serve as jury for the blog competition.

6. Recruit a varied, principled jury to judge the nominees. How many people, and how the judging process might be administered, would have a lot to do with the scope of the blogosphere that the award is attempting to represent. The jury ought to comprise a panel of distinguished contributors to and observers of the blogosphere, representing a range of specializations (design, content, community impact, significance of contribution, etc.).

The International BOBs use a jury of “independent journalists, media experts, and blog experts,” and each year’s jury is profiled on their Jury page.

The Webbys are overseen by the International Academy of Digital Arts and Sciences, a 500+ member association characterized by excellence in contribution to life online:

Membership in The Academy is currently by invitation only and is limited to those individuals who have catalyzed great achievements on the Internet, demonstrated extraordinary talent in a traditional medium, or who possess in-depth knowledge of new media and comprehensive familiarity with a broad range of sites within a category.

Could be this is why the Webbys have been called “The Oscars of the internet” by The New York Times.

7. Make the judging process as transparent and as rigorous as possible. The Webbys’ “judging process” page provides a great example of this.

8. Acknowledge that a means of communication as wide-open and unregulated as the blogosphere is likely to foster many blogs which straddle multiple subject area categories, complicating the process of parsing them into discrete subject area categories. The Webbys, which aim to reward excellence in web site design including but also far beyond the blogosphere, provide more than 65 categories. Notably, no “generalized” category exists, minimizing the confounding experience of comparing blogs with dramatically different purposes and scope.

9. Find a way to live with the fact that apples will be compared to oranges which will be compared to camshafts. And that no matter how the process is conducted — no matter how transparent, how well-thought out, how wisely substantiated by professional consensus — many folks will feel cheated, rooked, had, screwed, and swindled. Because there are two kinds of people: good sports and poor sports. Both will want to play, and everyone will consider themselves good sports, and their competitors poor sports.

10. If a select panel of distinguished jurors seems inappropriate for a medium as garrulous as the blogosphere, here’s a concession. The Webbys provide a parallel competition, the “People’s Voice.” There, the general online community can vote on the finalists chosen from the nominees. But this stands parallel to the “winners” chosen by the panel of professionals.

It’s not clear to me how the Webbys’ “People’s Voice” vote is conducted. How to narrow things down to the good ole fashioned, one person, one vote? That has got to be the $64K question. No one is likely to provide their Social Security number or their driver’s license number, two of the few data points which could be uniquely verifiable. Yet every other data point even just slightly less private — email address, phone number — isn’t exclusive to just one person. That is, plenty of people use multiple email addresses and phone numbers.

For better and for worse, this is what the Bloggies do:

â€¢ Â Only one nomination form and one finalist voting form may be submitted per person.
â€¢ Â E-mail addresses are required to vote. You must use your own address.
â€¢ Â If you attempt to submit a second ballot, your first one will be erased.

The BOBs do this:

While there’s no way to eliminate fraud from Internet voting, we’re trying to avoid it by making voters — the real human ones — enter text from a randomly generated image to confirm their votes.

So they, as do the Weblog Awards, surely field multiple votes from the hyper-motivated.

Whatever the case, if the “popular” part of the awards were to be determined by a one vote-per-computer, one vote-per-24hrs spree over the course of ten days, you can be guaranteed the following:

If all that sounds like fun, then great! Cause that’s what I think just happened with the 2006 Weblog Awards! But the “winning” blogs are not necessarily standard-bearers for excellence in design, content, or even utility to intended audience. They represent those whose readership and/or community is either the largest, or the most motivated, or both. Maybe they’re motivated by quality product, maybe not. All’s we know is they’re motivated.

And so we roll to a stop back here at this particular assemblage of lesbo bon mots. I gave up trying to solve the abiding mystery surrounding how in the Sam Hill this blog made it as a finalist (I’ve run out of alternative readings on the blog title; perhaps someone read it right, and thought these were the sweet musings of Papa Ethridge, or Papa Lang, or Papa O’Donnell). But there it was, and there it stayed, and it netted a sizable community of voters with a sizable motivation to vote, which has been in turns surprising, humbling, and inspirational. To those of you erstwhile voters who stick around as readers: I’ll try to live up to your expectations, on behalf of my cute kid, and all sorts of other cute kids in LGBT families that I think she’s standing in for. But it’ll have to be back at my pre-Sweeps Week publishing output, though. Every other day, weekends and childbirths off.

[Sixth list of ten: Things I have in common with dads]

4 thoughts on “Fifth list of ten: How to build a better weblog award competition”