Out at breakfast the other day with the lil’ monkey, the beloved, and Pops. After an enjoyable meal during which we all agreed with each other about the kidling’s charming precociousness (surprise, surprise!), Pops smiles conspiratorily, gestures with a tip of his head to a neighboring table, leans into me and says, “That boy in the blue sweater is a girl.”

I had noticed her as soon as we’d been seated, as one does when one such as oneself espies the only other mannish woman in a room. Except of course when one is in a dyke bar, in which case one notices the other kinda gals, trying graciously to ignore the mannish women as they constitute the competition. Or at least this is what one used to do, those dozen years ago when one was a swinging single, before one hauled the marlin to end all marlins up onto the deck of life. Said marlin now being the mother of one’s children.

Regarding the “boy” in the blue sweater, I says back to Pops, “Yep. Just like yours truly.” I smile the broad smile of one who is confident about the positive reception of a long- and hard-fought point. Thank the goddess, by now, nearly twenty years after coming out to him, we have it all figured out. He loves me for who I am; gets it; the works. More or less.

“There’s all kind of genders under the sun, Pops,” sez I.

“Oh?” he said, either feigning confusion to flush me out, or actually expressing it genuinely. We’ve had this chat before. Many times, in fact, and it really helped hone my chops for teaching Women’s Studies 1001 back at “the U,” let me tell you. But nowadays he’s a bit like the lead character Leonard from the movie Memento: short term memory loss up the wazoo. Though I hasten to note that he hasn’t resorted to tatooing vital factoids on his person. Yet. He does, however, keep a list of friends’ and family members’ phone numbers on a tattered little spiral-bound notebook, which he pulls out of his breast pocket from time to time, pencilling over the numbers slowly, deliberately. As if in the penciling he will emboss the numbers and people they represent deep into his long-term memory, for good. Bless his soul.

But so I look at him, and say, “Youbetcha! There are as many shades of gender as there are varieties of apple. Observe.” And I whip out my napkin with a flourish, uncap my pen, and commence to producing the following visual aid: 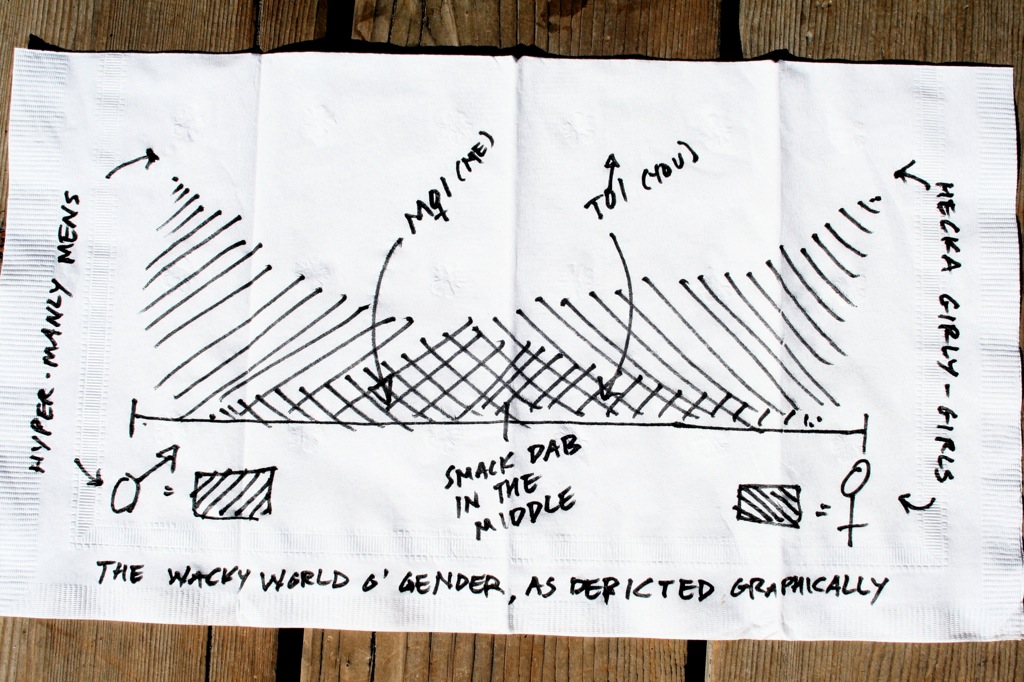 “Hyper-manly mens on the left end of the spectrum,” I explain to him as I sketch, “hecka girly-girls on the right end. Like the Kinsey Scale, people are spread across the whole shebang, more mens being masculine and more womens being feminine, thanks to hormones, but nobody has a lock on either.” His eyes get that far away look, and I imagine he’s contemplating East German women’s dominance at the Olympics during the 1970s.

“If you read fancy gender theorists,” I go on, knowing anything is possible with my dad, “you’d come to consider that masculinity and femininity are best understood as apart from the body, and female masculinity, modern examples of which we see at yon table and here before you, has a long and storied history.”*

Silence from Pops, but maybe because he keeps his hearing aid down low to minimize the reverb. Also, maybe I lost him.

“I, Daddy-O, am right about here,” I say, locating myself as a bit on the manly side of the median point, denoted by MOI in Fig. A.

He nods slowly. After all, he’s known his dolly (moi) ever since his dolly was a cross-dressing tyke, long before she was a swank-dressing dyke. I have him back, and am emboldened to continue.

I then cross-hatch in the range of possibility for males. “And you, I reckon, are riiiiiiiight abouuuuuuuut here.” Punto, down goes the pen just on the girly side of the median. TOI, in Fig. A.

Quiet moment during which he ponders it all.

“Yep, that’s about right,” sez he. He once told a story about how, when he was a young boy, his father explained to him what a “sissy” was. After the lecture was done, my dad thought to himself: “Uh-oh.” Said nothing to his swarthy, strapping, South Dakota farm boy, son of a circuit-riding minister, Coast Survey ship captain dad. Bless his soul.

As we leave the restaurant I catch the gal’s eye, and give her a small smile and a quick single nod, which she returns. Hail fellow, well met. I have to hope my dad found his solidarities along his way. From the tales he’s told, he did. To my enormous gratitude he also found my mother, who loved us both, in spite of our masculinities. Or lack thereof, as the case may be.

* Judith Halberstam’s work Female Masculinity brought this topic book-length treatment; informative review of it here in Jolique; interview with her about it here in Genders. Strap yourself in, though: the interview is jam-packed with 25-cent vocabulary words comprehensible only to advanced, upper division students of genderology. The interviewer’s first question is enough to send the cynic into an anti-intellectual tizzy-fit. Persevere if you dare.