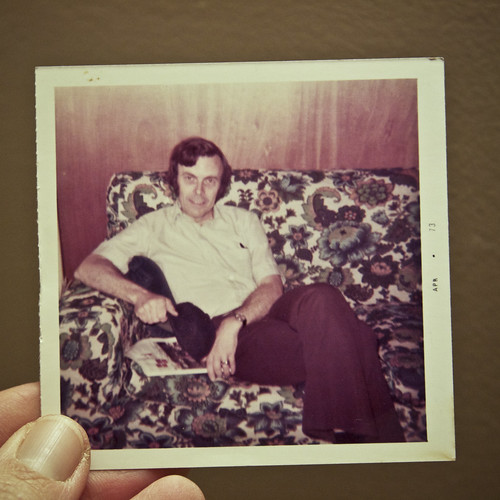 Today my Pops turns 90. He has outlived more family members than he ever expected to, including younger sister, wife, first grandson. For as long as I can remember, he’d say, regarding his projected longevity: “Live ’til ninety, then start counting.”

We’re hoping the counting will go on for quite some time.

I remember taking the picture above some 38 years ago with my first camera, a Kodak Instamatic. I was roving around taking portraits of every family member, bipedal and quadrupedal, that would hold still long enough to let me. Â Most pictures were of my dog, and then later, landscapes on family trips. I remember that of all the family portrait subjects he was the most accomodating, but he had to get up and procure himself something to hold, so’s he was — I don’t know — more occupied. Kind of more official-seeming. I think he’s holding a baseball hat of mine. Hard to tell against the shouting-out-loud polyester cover we had on that couch.

Now he’s got a pugnacious Dupuytren’s contracture, a condition that bends the pinky and ring fingers in toward the palm. He would be able to hold that baseball cap now, but with a little more difficulty. Can’t play the piano anymore. When he remembers to put in his hearing aid, he is still never 100%. Whenever he knows he’s been asked a question, but didn’t quite hear its particulars, he answers, “Probably.” Which works pretty well in most circumstances. At a table with more than a few chatting people, he can make out that people are having a lively conversation, but often is challenged to identify exactly about what.

There are milestones yet that he might like to witness. But he’s seen a lot already. Â Triumph, loss, precious things broken. Now all he cares about is love. When he’s at his most lucid, when I’m talking to the Pops I’ve known all my life, that is what’s vivid to him. Events in the recent and middle distance-past often shimmer for him in a warbly blur, like pebbles underwater at the bottom of a creekbed. For a while now it’s been easy for him to slip my sister or me out of our generation, and until we catch and gently correct him, for a moment he can think he might be talking to his younger sister, or his wife. A Geographer by profession and a world traveller, he has longsince lost his ability to know his way outside of the town he spends most of his time in. Nowadays, when he’s visiting me in my town — the place he met and came to love my mother; the town I began in as a zygote — it is as if block after block is appearing to him out of the fog of a dream. “Ah, yes,” he’ll say, as we drive along, but it’s hard to tell if it’s not still dream-like. “Probably,” might be his answer.

What is vividly clear is that it’s the love of the people around him — mostly, when it comes down to it, the love of my sister and me and our families — that he is sticking around for. Â He has said as much for years. After you’ve done what you’ve wanted to, been where you’ve wanted to go — if you’ve been so phenomenally fortunate, which he essentially has been — it is the love that is left. It’s a nice thing to know. Â At the end of our nightly phone chats, I always remind him how wonderful it is to hear the sound of his voice, how much talking to him is the highlight of my day. I love saying that to him. Then, before we hang up, I say, “Hey, how ’bout we talk again tomorrow?” And he says, “Hey, how ’bout it?” Â Not knowing for certain whether I’m going to get that privilege makes it all the sweeter every time I do. 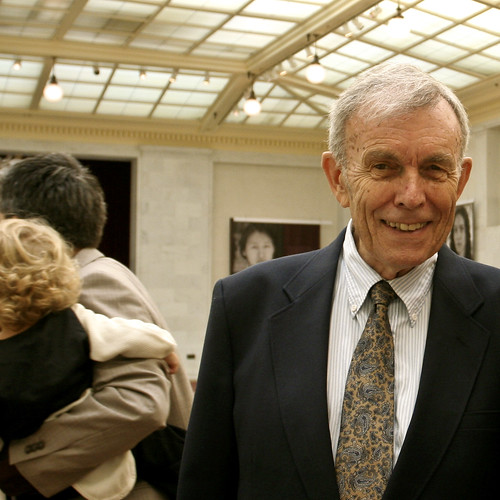