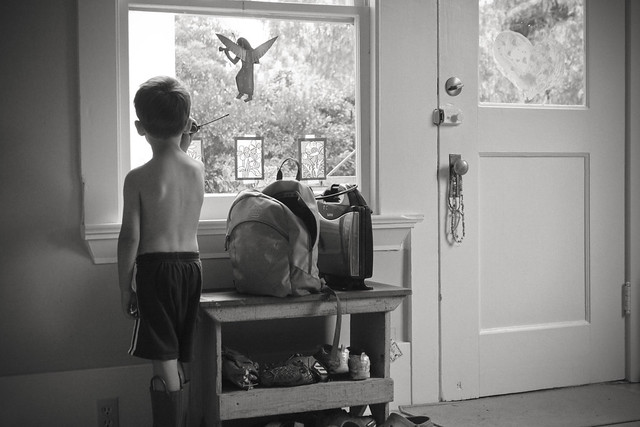 The window he’s looking out is the back door, not the front.  We live in Berkeley, CA (better known, perhaps, as “Berzerkeley” or “The People’s Republic of Berkeley”) and we’ve seen stilt walkers, solitary harmonica players, muttering grocery cart pushers, cell phone-clutching subway-bound commuters, skateboard riders, and a three-legged neighbor dog stroll, roll, hustle, and lope east and west in front of our house.  Still, all the real action takes place out the back window.

Out back is where the shared yard is, through which his cousins daily pass en route to their home at the north of the lot; out back is where his kind, endlessly fascinating neighbor friend (my own friend, of over 20 years) lives in the building to the east; out back is where most of his and his sister’s adventures unfold: on the grass, under the bushes, on the trampoline (and under it), in the hammock, around the veggie bed, and on the chalk drawing-bedecked concrete between two of the houses.

His and his sisters’ ages only just last week began to add up to more than ten years. A big milestone, that. The hub of their adventures is sure to shift away from the homestead, and sooner than we’ll be ready. Meanwhile, this is where it’s at, and it’s quite an at.

This shared yard he’s lookin’ at didn’t come without effort.  In timing that was both the worst and best it could have been, we began work on it immediately following the devastating terminal illness of a child in the middle of my family.  No matter how challenging it was or would become to figure out our housing, my beloved and I knew all of it was small potatoes: we were going to be essentially all right regardless of how it turned out;  we knew “it could be worse,” since it very recently had been as bad or worse than we had previously been capable of imagining.

Still, after that outsize caveat, the work to secure this window view has turned out to have been exceeded only by the amount my beloved and I put into having our kids (no mean feat for our kind; for us, a seven-year journey), and into our significant other relationship (seventeen years and several therapists’ worth). We didn’t expect it to be so challenging, but we did dream it would be so rewarding.

For five years we stressed buckets, we wedged our growing family into an attic apartment (accessed by two flights of outdoor stairs which we climbed and descended through five rainy seasons, most of which with an aging dog, a toddler and/or a newborn).  We ran emotional and financial mazes (and steeplechases, and scenarios) over and over again and, over time, confirmed that in spite of our differences and all this effort, our shared dream of shared housing was worth the effort.  Three generations ultimately made it all happen: one grandparent invested and another gave in advance so that it could come to pass and their grandkids could flourish.  Five hard-working adults, four hard-playing children, two cats, countless neighboring songbirds, and a guinea pig now call this place home.

A year ago this month our own house, the last of the three to do so, assumed its final shape: the attic that was once our whole home is now home to our bedrooms, my workspace, and a dreamy, dreamy kids’ play area. Brother-in-law, spouse, and two kids live in a house they built at the north end of the lot; my old friend of twenty-plus years lives in the duplex at the east. We four, in our 97 year-old house, anchor the southwest corner of “the village.”  Weekend mornings we share baked goods among us (this past Sunday: popovers from the cousins’ house, waffles from ours).  Sunday nights this time of year, when it’s pleasant and warm, we grill our supper and gather around a long picnic table beneath the pepper and willow trees, to revel in the harvest.