Ido, pero no olvidado: Gone, but not forgotten.

Here in California, former Mexican state and forever territory of Aztlàn, the Días de los Muertos are much observed. Spanish speaking folks might be interested in this beautiful and detailed site about the fiesta from the Mexican National Commission for the Development of Indigenous People (at least that’s what I think the title reads). The Google-translated page is an abomination, even to my bad Spanglish-speaker’s eye. But this is a nice piece on the meaning of the fiesta by Iowa State University Professor Ricardo Salvador.

As I have written before, our daughter’s birth was closely followed by two deaths: the first, an adult in the extended family, who died in an accident; the second, a child in our close family – my nephew Erik – who died of cancer. In between the deaths of those family members was that of the partner of my friend Paul. In her spirit-filled fight against leukemia, Amilca received treatments at the same hospital where my nephew received radiation therapy. Erik went there three times a week, for six weeks. Most of the time I accompanied him, and on each visit I thought we might chance to see Paul and Amilca and their infant son there. In the well-appointed hallways we might provide solace and mutual acknowledgement along our hard paths. We never did see them, but I conjured them and their love and their parallel journey a great deal, especially when the heavy radiation room door swung shut between Erik and us, and the “Do Not Enter” sign lit up.

Amilca died in early December that year. At the time of her death, she had an ofrenda up at the Oakland Museum of California’s Day of the Dead exhibit. She was a poet and a visual artist, and had collaborated on it with her father, an artist, teacher, and director of Mission Grafica at San Francisco’s Mission Cultural Center. This year, it was Paul who collaborated with her father; their ofrenda for Amilca is in the museum’s exhibit this fall, “Laughing Bones/Weeping Hearts: Dí­as de los Muertos 2006.” I’ll conjure their loving spirit as we make our altar tonight, knowing our paths are intertwined still, now joined up with those of everyone else who mourns and remembers and celebrates. 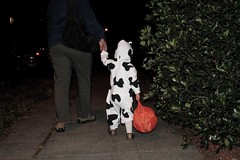 Won’t take this, nor any other such a night, for granted.
Thanks to you Amilca, Erik, Kay, Melanie, Mom, Sigrund.

1 thought on “Ido, pero no olvidado”