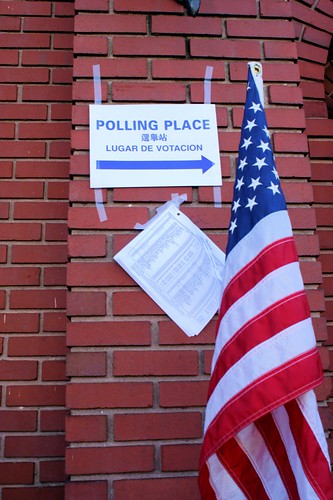 The teeth gnashing, knuckle nibbling, and coffee stirrer shredding begins as we watch what happens when majority rules a nation in which we – here, “we” being LGBT parents – are now and ever will be in the numeric minority. At a time in which the legal and social security of our families has been construed as a wedge issue, the better to distract from Actual Matters of Significance (poverty? health care? peak oil? global warming? war without end?). We work our hineys off, and then at the end of the proverbial day know that our allies – and in another generation, our kids – will make the critical difference. Meanwhile, teeth gnashing and knuckle nibbling.

Today, voters in South Carolina, South Dakota, Tennessee, Virginia, Coloraado, Idaho, and Wisconsin will be considering whether or not to ban marriage between same sex partners. [Human Rights Campaign has an election watch page here.] In my home state, we already got socked in the solar plexus on that one back in 2000.

This election, Californians consider keeping or dumping “the governator,” and folks in my neck of the woods will consider keeping or dumping our representative in Congress, the heroic Barbara Lee of “Barbara Lee Speaks for Me” fame. As ever, we will also consider various statewide propositions, which once seemed to represent an exciting innovation in populist legislative change, and have become another playing field for those with big bucks to run hyper-financed ad campaigns.

On the municipal front, residents of my fair berg also contemplated Measure H, which reads:

Shall the City of Berkeley petition the United States House of Representatives to initiate proceedings for the impeachment and removal from office of President George W. Bush and Vice President Richard B. Cheney and call upon the California State Legislature to submit a Resolution in support of impeachment to the United States House of Representatives?

The San Francisco Chronicle did a bit on the measure here.

This morning, before going off to vote, I was chatting with the day care gal in my typically abysmal Spanish. (I once said something like, “If I knew what I was actually saying I’d be really pregnant.”) She had been watching analysis of the election earlier on Univision, and was updating me on Bush’s approval ratings. I said to her – or think I said – “Usually, democracy is an ideal, and in actuality it works very differently. Days like today, we allow ourselves a little hope.”

Just in time for Pride!