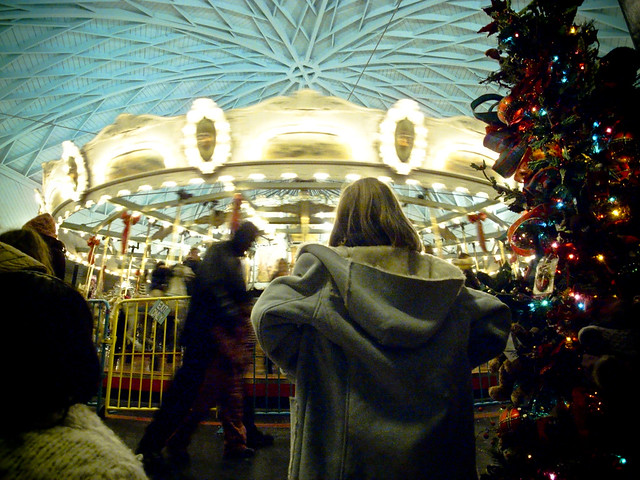 We’ve been here before. (Back then, when she was two, and again then, at two and a half. Clearly it’s a thing for me: I just counted over half a dozen “carousel”-referential posts here.)

We’ll be back every single year, until the youngest of them can no longer grasp enough of a wisp of his childhood self to enjoy the ride.

I really don’t know what to expect with these people. When they reach the tween verge, and the tug-of-war with their past and future intensifies, what will they do with these childish things? They are so full now, with such easy access to a wisdom most would attribute to advanced years, and an equally easy access to a weightless imaginativeness most would attribute to extreme youth.

What I want is for them to continue to hold that paradox, all the while being fully immersed in their present. À la the reformed Scrooge, who, at the end of his three-directional hell ride, vowed to the Ghost of Christmas Yet to Come, “I will honour Christmas in my heart, and try to keep it all the year. I will live in the Past, the Present, and the Future!”

A gal can, and does, dream.

2 thoughts on “Regarding the carousel”