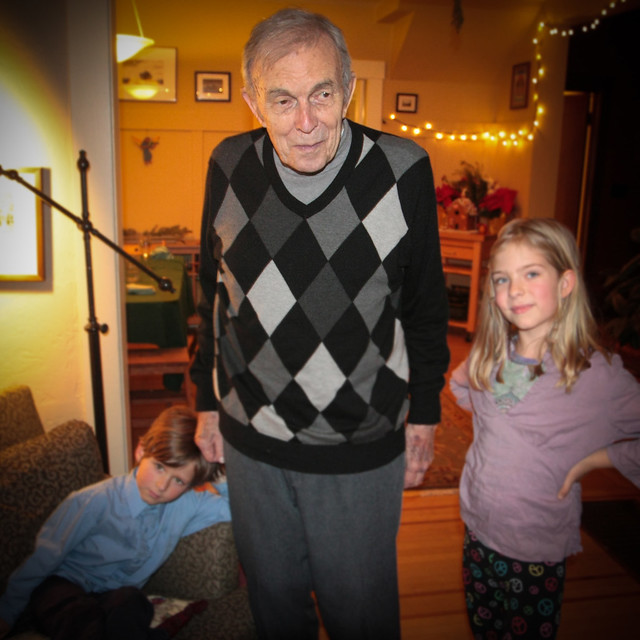 Friday morning, on his 92nd birthday, he had a stroke. A “mini” one, as opposed to, one supposes, a “maxi” one. Though these are often early calling cards for bigger ones to come.  He fell into my sister’s able and waiting arms, as it happened.  As I’ve long maintained, he has been a lucky man.

While the doctor pronounces that the stroke is “resolved,” everything else attendant to his advanced years is hunkering down for a determined, protracted stay, for the duration. Whatever length that may be.

Meanwhile, his aphasia-, mini-stroke-, and long, slow-growing meningioma tumor-wracked brain does its best to recover what speech and cognition faculties he can.  This, on top of years of crummy hearing, getting crummier by the day.  All this makes communication a midnight hayride.

Fortunately, for one, he and I have long ago said all the big things we’ve had to say to each other. Full-on, unconditional love, forgiveness of trespasses, mutual understanding of the most valuable, ineffable bits in each other, the works. So we’re clean.  And we’ve been closing every conversation with “I love you” for years and years.  (It’s notable that long ago, this wasn’t such a comfortable thing for him to utter so casually and regularly – “You know that I do, doll” – but I persisted in telling him that it matters to hear it, and I was going to say it to him anyhow, so he may as well just get used to it.  Here to tell you that persistence pays off.)

For two, what do the individual words matter, at this point, when the big picture’s clear as day? Whenever possible, I just surf with whatever he’s saying, imagine what he might be thinking or intending to say, and be as agreeable to him as he has basically been to so many others most of his life. Because why not?  Today he asked about “that woman in the red sweater.” No one fitting this description was in the room, nor had been.

“You know, the blonde?” He was intent.

I looked at him, wracked my brain for a blonde. “I think that was Kim Novak.”

Because why not? His eyebrows went up, he smiled a bit. Seemed to satisfy him well enough. At least it was an answer, and it made no more nor less sense than any other one. Plus, Kim Novak.

A couple of days ago, during the more extreme, “salad speech” phase, the first 12-18 hours post-stroke (yes: salad speech, a bona fide technical term, I saw it on his chart), he had very little to say that made sense, even at the individual word level.  Even then, the word he uttered more often than any other? “Yes.” “Yes, yes, yes,” he would say. “Yes, indeed.” Punctuated periodically by “Wow!” and “Zowie!” Eloquent enough commentary on life at large, if you ask me.

At one point, I noted: “Pops, you have said ‘Yes’ at least twice as much as you’ve said ‘No’ in your life.” He nodded understanding. “And that’s why you’re here celebrating your 92nd birthday today.” Another nod, sober as a judge. Can’t disagree with that one.

Yesterday, he was asking a fairly nonsensical question which I just couldn’t, for the life of me, salvage enough sense out of. Not all Jabberwocky/ Olde Englishey, like the day before, but still not enough sensible nouns and verbs in the right place. I assayed a few Hail Mary faux answers so’s to scratch whatever itch he had, but they weren’t doing the trick.

After he asked a third time, I broke down and said, “Pops, I have to tell you, I have absolutely no idea what you’re saying.”

He looked at me with that unmistakably him twinkle in his eye, and said, “That makes two of us!”