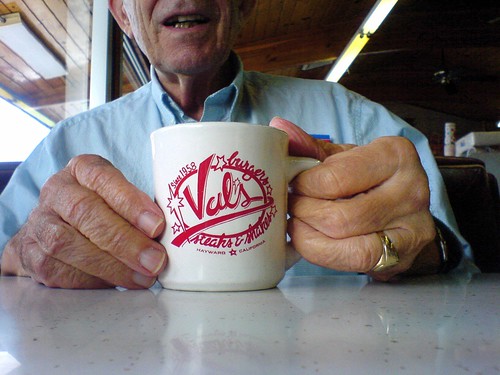 At our family’s dining room-away-from-home.

There are two kinds of lovers of literature: those who savor every word and image, regarding characters like they were old friends and old enemies. Then there are the rank opportunists, shameless scavengers who traipse through Great Books with the sole intention of poaching a random line here and there for later use. Usually out of context. (“Out, vile jelly, where is thy lustre now?”, for example, while scraping the last of the Smucker’s out of the jar.) I must admit to you now that I am among those ignominious readers huddled in the latter camp.

So it was no surprise that as soon as I clapped my eyes on the tragedy of King Lear, back in high school, I was all ready with my shoplifter’s deep-pocketed coat. When Lear said to Albany, “How sharper than a serpent’s tooth it is to have a thankless child,” I knew my sister and I had found our motto. You see, our dad has asked for it in every which-a way, mostly by teasing us relentlessly and having an Olympic sense of humor at the same time. So quite naturally my sister and I have been teasing, taunting, goading, ribbing, and razzing him since we were able to wrap our tiny mouths around our first syllables.

In our family, the Lear statement morphed into many variations, and came to rest at “How sharper than a serpent’s tongue it is to have a toothless child.” Thereafter, we simply referred to my sister’s and my insolence as examples of our being “toothless.” Of course the sweet paradox was that we had access to this joke only because at the root, my sister’s and my love for our father was like that of Cordelia â€“ loyal, honest â€“ not the flattering deception of Goneril and Regan. And even when nerves were frayed and faith was tested, we knew he had a “pass” for life if for no other reason but that our mother loved him. If our mother loved him, well then.

But then of course there has never been “no other reason.” I have reasons aplenty to love my dad, and one of the deepest is that he has always wanted nothing more for my sister and me but that we become fully who we are. Whoever, and whatever that might be. If there’s anything more specific he’d add to that want, it would be that we be as happy as we can possibly be. Nothing special, really. Standard parent stuff.

When for me, self-realization entailed realizing I was a lesbian, my parents paused only momentarily at disappointment, moved fairly briskly through confusion, and strode admirably into self-education, to varying degrees, never once setting unconditional love aside. Their initial misgivings stemmed mostly from a worry that hatred and bigotry would put me at risk of verbal, maybe even physical attack. A reasonable worry. And they also â€“ this was back in the early 1980s â€“ couldn’t imagine how I would be able to experience parenthood, something that so hugely fulfilled each of them.

Toward the end of Lear, Cordelia speaks of her “child-changed father,” referring to how the cruelty of her sisters has broken him. I would call our dad “child-changed,” too. But for the better. Being a father stretched his heart wide open, and his commitment to loving us, whoever we would be, stretched it wider still.

Happiness is an old friend

One thought on “Lear goes to lunch”