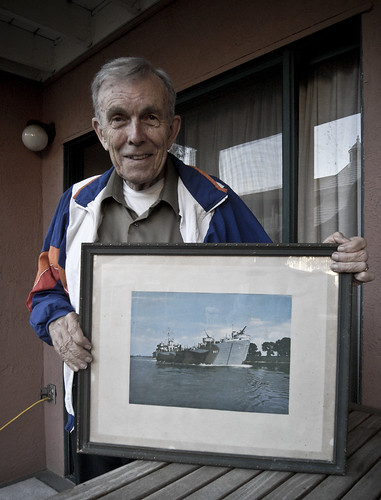 Pops with his LST.

My dad enlisted in the service as a college student at San José State University in the then-orchard-ridden South (San Francisco) Bay Area. He was what he called a “90-day Wonder,” prepared for leadership in war by three months at an officer’s training school at Columbia University in New York.

He still retains a number of stories from WWII, none of which entail him receiving anything more than a glancing wound. (His glancing wound was one, once, and it was his own durn fault: during a ship-board drill, he banged his head on a pipe. When he appeared topside with his helmet on, a wee trickle of blood ran down his temple. He gets a special impish twinkle in his eye as he tells about the fervor with which his men saluted him after that drill.)

One of his stories sticks with me the most, because it is so descriptive of his life.  He was on an LST – landing ship, tank – heading to Normandy Beach along with a flotilla of other D-Day-bound vessels. They were off the coast of Scotland, and he was on lookout on a cloudless, moonlit night. Another sailor confessed to him his worry: they would be more easily detectable on such a bright night. My father thought: pish tush. And then movement in the water below him caught his eye. He watched the ripples of water above as a torpedo drilled its way toward his ship from the port side, then under it, then, with a burst of light, it exploded into the deeper-hulled transport ship to the starboard. There but for a deeper draught would have gone my father.

He told me that that last death in particular was immeasurably harder than the war was for him. That may say as much about what he saw during the war as it does about the impact of the death of a child. It also just hints at what it might feel like, the death of a child due to war.

My Pops knows he’s a lucky man, is the main thing. Watching that torpedo go under his ship just focussed and dramatized something that seems to have happened throughout his long life.  The mixed blessing of seeing hardship narrowly miss him, yet still exact its painful toll, right there in front of him.  The peculiar weight borne by the compassionate witness-bearer. The luck of his long life has a bittersweet taste to it. The bitter: the longer he lives, the more people he outlives.  The sweet: the longer he lives, the more he loves who he still has, for as long as he still has.