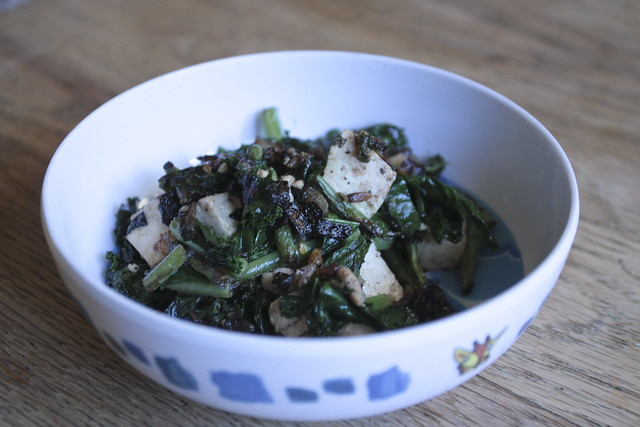 Above, what I ate for dinner, oh, a number of weeks back.  A favorite meal.  Stir-fried tofu, sauteed purple onions, roasted pine nuts, stir fried kale. Probably olive oil, some Spike and other seasonings, probably a dash of sesame oil, a squirt of Bragg’s Liquid Amino Acids, and a shake of toasted sesame seeds. Dinner of tree-hugging vegetarians.

It’s in a kid’s bowl, because for reasons even I can’t explain, I still hold out hope that they’ll be enticed. There are a gazillion ways parents successfully lure their kids into healthy eating habits, and most of those are assayed by people with more patience and tenacity than my beloved and I, more willing to stay up late and read nifty books and blogs about how to induce your kid into healthy eating habits (there are scads of ’em). I did listen to Laurie David (environmental champion, producer of the huge documentary An Inconvenient Truth, and advocate for green and mindful eatery) break it down simply, thus: she decides what to bring to the table, her kids decide how much they’ll eat.  That was when her daughters were younger and in the inducement age. Now that they’re teenagers, they’re more vegan and locavore than their mom. Hope springs eternal.

I figure we might get there. But in the never-ending parental steeple chase, you can get up over only so many hurdles, and after everything else (cleaning up after themselves! making creative stuff in some hands-on activity instead of staring at a screen of some sort! engaging in sincere conflict resolution after the inevitable fights do happen!) the tired ol’ mares among us will just have to rear up and trot around that last, one hurdle too many. Working some kind of miracle mojo and conjuring fantabulously non-picky, adventuresome eaters (particularly when a sucrose product bribe is just plain off the table, literally and figuratively) is smply one of those parental hurdles we just gave up on clearing. At least thus far. We’re only seven years into this gig, any thing could happen.

Still, I couldn’t resist at least inviting my kids tuck into this particular bowl of iron-rich, low-on-the-food chain, resource-thrifty victuals.  “Mmm, yum! Want some?” After being met with adamant refulsals, I queried my kids just what, exactly, caused them to cast such gimlet eyes upon the bowl. This is what I jotted down:

That was at least a help.   Most of the above conditions, alas, are endemic to the kale dish.
I sighed, and brought them out this guaranteed crowd pleaser for dinner instead: 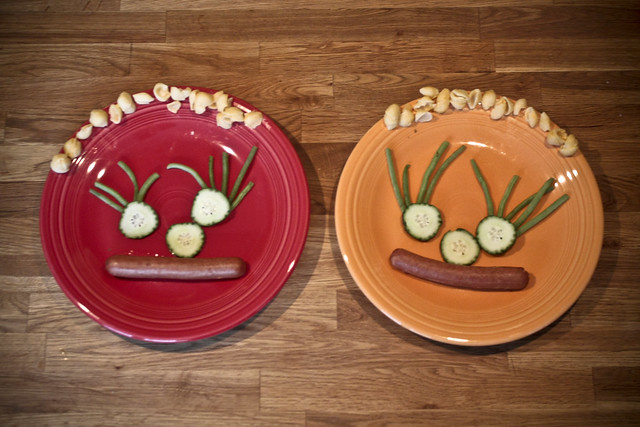 Yeah, go ahead and laugh. I won’t blame you. But at least it was Annie’s mac and cheese without the glow-in-the-dark fluorescent food coloring, the veggies were organic and grown locally, the hot dogs had no nitrites, hormone supplements, or antibiotics in ’em, and the cattle that gave their lives for those dogs were fed an all vegetarian diet and were raised humanely on environmentally sustainable ranches also not more than an hour or two away from here. You know, before the unthinkable happened to them.

From our kids to your families, OK and beyond

Rainbow kids will save the day

3 thoughts on “No accounting for taste”