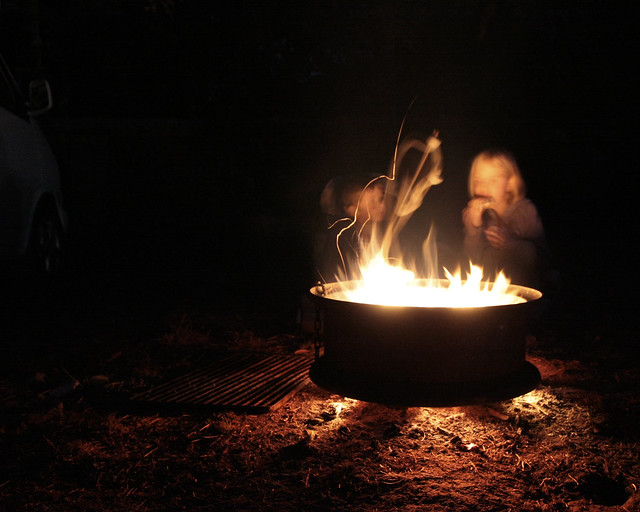 We took a camping trip a few weekends back. A micro-trip: one overnight, left town Saturday afternoon after work, came back Sunday night. Camped out in the brother-in-law’s camper van. Stayed in one of those commercial RV park dealies, because of course the whole thing was spur-of-the moment and nothing at a state campground was free.  At least in our state.  But lord love us we went.

The beloved and I were both in foul states of mind, en route. Stressed, sad.  Neither of us has made appreciable headway in our respective work/life arm wrestling matches.  Balance, we each feel confident, is on the horizon. But at the moment the horizon line remains tipped.

The kids were not about to let our gloom obscure their delight with the entire experience. The fact that we attempted and were rebuffed at three state campgrounds dimmed their spirits not a jot. Neither did the steady mist that turned into a rain.  Nor our setting up in the dark, cussing, muttering. At the end of the line, there were hot dogs and s’mores. That, they later reported, was the best part about the camping trip.

The next morning, as Mama and I were rubbing our backs and nursing our coffees, they remained in the pop-top area of the camper van, spinning one elaborate imaginary tale after another.  Couldn’t have been happier.  Their resilience–really, their single-minded dedication to finding the fun, even at the bottom of an empty tin can–was  instructive, nearly shamingly so.

We need some more. Time, together. Balance.

My output here has slowed to a trickle, due, as I have noted before, to the fact that the spare time I used to squeeze blogging into has all but evaporated, and now I squeeze my kids into that spare time. Work, which I STILL haven’t told you about (what’s to tell? it’s all-consuming and also really nifty), looks to finally have a period of (relative) quiet coming up. I hope to exploit that by finding a way back to writing here. Since I have found that some of my sadness has come from not writing. (Want to know a sign you’ve finally arrived as a writer? When not writing makes you sad.)

So! Though I have a tendency to over-promise and under-deliver (I have a hunch it’s supposed to be the other way around), I am going to take up that dagnab NaBloPoMo challenge in November.  Yes, yes I am.  And you can’t talk me out of it. Here’s a preview of what I expect to Po during that Mo:

Thank you for sticking around, whoever you are. Hoping to give you s’more soon.