About a million years ago, I received a series of questions for a middle school project from Mickey, one of my special nieces. “Special nieces” being the daughters of my friends, one of whom is one of my oldest continuous friendships, dating back to September 1980, the other of whom is her former spouse and the donor chum and thus special uncle to our children (more on extended familial nomenclature here). The whole family, thanks to the bond we’ve forged with love, trust, and biology, is more than special.

But so! Way back when, I told her I would try to answer them all, and since she is internet-savvy (what person over the age of 12 isn’t these days?), and knows I write here (for better and for worse, I’m sure!), I asked what she thought about my answering via a post, so as to have the whole conversation get wider. She liked the idea, and said she would link to my reply in her Tumblr site. So! Hey, Mickey! Here! Months upon months–indeed, a whole school later, ya big ole high schooler–below are my replies to your questions:

The suburbs of the East Bay of the San Francisco Bay Area.

Four people: a mother, a father, and a sister. We didn’t see the extended part of it very often during my growing up years, so it felt pretty “nuclear,” for all intents and purposes. Even if I knew there were others of our clan somewhere a few hours or states away.

“She” is totally fine by me, but I am never disgruntled when people read me as a he, and only “correct” people  if our exchange goes on and on and I figure eventually they’ll get embarassed if they all of a sudden realize they initially got it “wrong.” On a recent trip to New York I counted well over a dozen references to me as “Sir,” and was quite tickled. I consider it a sign I’m dressing smartly.

No, for two reasons. One: when I was searching for a sense of who I was, gender-wise, no one I knew of had done any of these things, and the options only became part of my circle of friends/ awareness when I was in my late twenties/ early thirties.  Two: I’ve never felt like I was born into the wrong body; I’ve always felt like I was born into a culture that doesn’t allow enough space (yet) for the full range of femaleness or maleness, so that’s what I’ve put my efforts into changing. I am totally fine with being the kind of female I am, and the kind of person I am as a female, even bodily. Butch gals rock! Even if my breasts are not my favorite body part. Don’t tell them and we’ll all be okay.

Um, probably when I first realized there were any.  Quite certainly before I was five. See Fig. A below for  version of myself when I was about yours or your sister’s ages; at the bottom of this related post is a picture me when I was a pint-sized version of the above. ‘Nuff said? 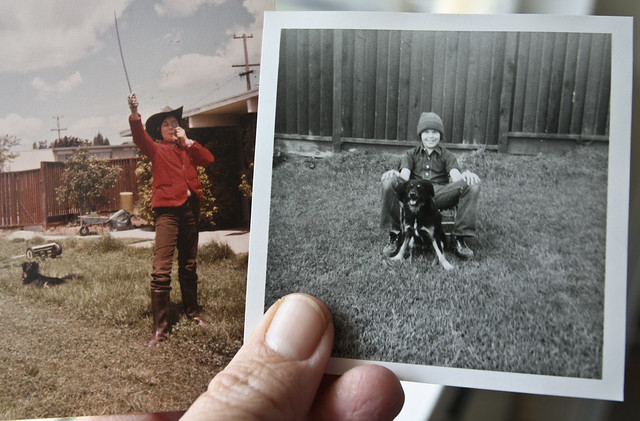 My sister was the first family member I came out to, and I came out to her within about a year after I came out to myself, which was at 19. So, 20 yrs old. I came out to my dad another 3 or 4 years later, and my mom last, 5 years in. I picked them in order of perceived comprehension and receptivity, and was dead-on in that assessment.

That process is always a kind of slow, iterative one (I think, or perhaps it was for me). My first partner, whom I was with for 5+ years, was way less comfortable than I was being identified in public (I recall many a finger slipped out of my hand).  We went to the Gay Pride Parade (as it was more or less called at the time) in 1985 or 1986, under the guise of ice cream salespeople for a city political group we were each working with at the time (Berkeley Citizens’ Action, the lefter-wing of the two city left-liberal groups). That might mark my first public appearance as a lesbian.

There are TONS of us! And if you’re out in a safe place, it can make you very, very happy. (Obviously the work is now: make every place a safe place.)

When I came out to my sister, she chuckled and said she knew before me. While she is an older sister, and thus prone to the kind of know-it-all-ness that older siblings are accursed by, in this case she was right. (Sorry, Mickey! I know you’re an older sibling. Hopefully you’ll recognize the grain of truth. Since, you know, you’re usually right!)

My dad, because he has something of a fluid sense of his own sexual identity, was sympathetic, though at first he had a fairly typical “This is surely a phase” response. Mostly because he consigned his own same-sex interests to a phase. He doled out ten years of fairly consistent, patronizing commentary about the “phaseness” of who I was before he began to realize it wasn’t a phase. Or if so, a life-long one.  To his credit, he was certainly amicable and kindly to whichever of my gal pals I brought home to meet him, as was my mother. Notable also is that somebody had to take those pictures up there of me.  It was probably my dad.

My mother understood me the least, and was initially worried I was lesbian because I had a negative experience with a boy. (Far from it! I had none; never was threatened by them; had nothing but amicable buddy relationships; my biggest beef was being underestimated when it came time to pick teams for co-ed sports in P.E.) I was still toward the early (first 5-10 years) part of a process of helping her understand when she died of breast cancer. To this day I attribute my strong desire to do coalition work with heterosexual women a kind of compensatory boobie prize. If I can’t help my mother understand me, least I can do is do the same gentle, patient work with absolutely every other heterosexual mother on Earth.

The $64,000 question. O, o so complex. Even as a kid I felt solicitous and protective of her. Opened doors, etc. Loved her unconditionally, still do. She was a heavyweight woman, had no siblings, raised in apartment after apartment by a single mother (father left the scene, effectively, after her parents divorced when she was 7).  Her mother was most likely an (unaware, unrecovering) alcoholic (never divulged as such to us, but my sister pieced this together after our grandmother’s death from our grandfather’s second wife). She grew up if not poor, then definitely of limited means and tenuous security. Perpetually underestimated by others, or so it seemed to me (note the swashbuckling crusader identity in Exhibit A above: random? I think not).

She was very very loving and protective of my sister and me, and did all in her power to provide for us the healthy, supportive childhood I strongly suspect she lacked. Christmasses were a potlatch of plenty, I’m sure for this reason. We looked at the delight on her face as we opened present after present. To let her down in any way whatsoever was more or less inconceivable to me.

I think it’s for this reason that it was only after she died that I really completed the process of becoming my mannish lesbian self. Only in retrospect did I realize this, but I sincerely believe that because I sensed it would let her down for me to express the true me, as I felt I was gendered, I didn’t fully let myself go there.

In the year following her death, I got a tattoo, shaved the last of the hair on my head, and got the big ole heavy workboots I always wanted. In other words, I opened the door and invited in the female masculinity that I had left shivering outside on the porch for several decades. Nearly twenty years after her death, I would say now that I think she would have loved me anyway.  My mis-step was to confuse understanding with love. Yes, she would have not understood me, not right away. But she always did, would, and probably still does love me.

Fortunately I know your parents, Mickey, and can say with confidence that they love you no matter what or who you find yourself to be, whether they understand that person as quick as you do, or not.  Hopefully you know this now better than I did about my parents when I was your age.

Because my replies are so dang lengthy (who’s surprised?), this is broken into two posts. Here’s Part 2.
________________
Later note: As of this interview, “they/them” was on the horizon in our world but not yet arrived enough to make it into the interview or conversation. Years hence, both Mickey & I prefer they/ them.  Though, true to form (Libra, person of my generation, etc.) I have been called so many things for so long that I quibble more about the tone of the address than the content.