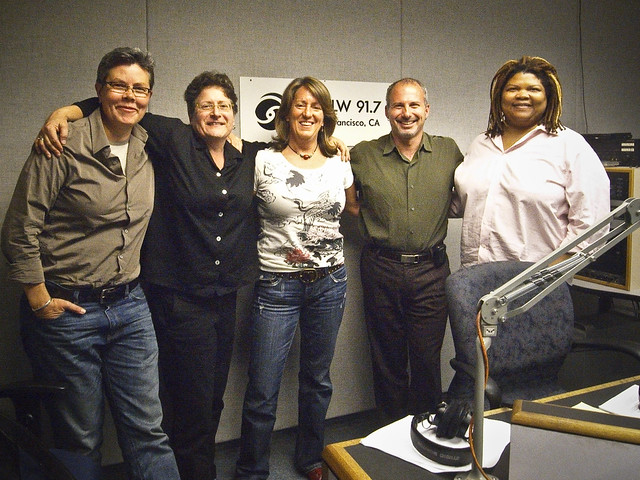 The photo above is visual punctuation on a really nifty event: I had the amazing opportunity a week ago to talk with KALW’s City Visions host Joseph Pace about the marriage equality movement in California alongside two of the smartest, most consequential women you’re going to find on the issue: NCLR’s Kate Kendell and EQCA’s Andrea Shorter. (I know, right? Pinch me! Wait! Don’t do that: it would just hurt.)

Producer Lisa Denenmark wanted me to speak to the big picture cultural matters that the issue brings up, and provide a first person and parental viewpoint to flesh out the top-notch legal and tactical vantage points provided by Kate Kendell and Andrea Shorter. So lord love me I did.

Just the fact that I got to spend an hour in a room with these sheroes of mine was enough. That I was actually providing color commentary on a radio show with them bamboozles me still. But: life is nothing if not bamboozling.

Go listen to the show, by the way: it was a very interesting conversation. I learned a lot during the course of it, and confirmed my belief that if the whole movement were in Andrea’s and Kate’s hands, I’d sleep pretty well at night.  I’m not saying the battles wouldn’t be hard, and it wouldn’t take generations to get where I want us to be: just saying I’d sleep well knowing steady hands were on the tiller, guided by razor-sharp acumen and hearts as big as they need to be and egos as small as they ought to be (i.e., unencumbering these women’s work, leastwise to my naked eye).

Coalition with (non-queer and queer) communities of color and faith communities will of necessity be part of the ongoing work on this issue in this state, and this issue does not and must not eclipse–at least in the view of those of us at City Visions last wee–other totally critical LGBTQ civil rights battles, such as those over immigration reform, full DADT repeal for trans servicemembers, employment and housing discrimination, to name just a few.

I was very lucky to have the opportunity to repeat my strongly-held belief that a ballot initiative to repeal Prop 8 would be about as wrong-headed as the ballot initiative was to instate it. (See also this post.)  One of the many more pithy quotables that occurred to me after-the-fact was: “I don’t want civil rights because I’m no longer unpopular; I want them because it’s right.” What I wound up saying was kinda like that, only less pithy and involving references to constitutional democracies and the like.

As the show was wrapping, Joseph asked each of us for some parting words. What I wish I said, a bit more succinctly than I managed, was:

The most important work right now for LGBTQ families in this movement? First: ongoing self-love. Next?  Tell our stories and make common cause with everyone else outside the normative understanding of family: blended families, interracial families, adoptive kids, special needs kids, single parents, families with queer parents: together, we’re what the American family really looks like. “Love makes a family” is a very big story with wide-reaching consequences.

Right: so, that’s what I’d wished I said. I kinda got a running start at it and Joseph had to do the “Aaaaaand, wrap” hand gesture on me just as I was warming up. If ever they ask me back on the radio again, I will try to bring more 3 x 5 cards and fewer sentences.

Whether or not I was ready for prime time, the pleased-as-punch smile on my face in the photo above is testament to how proud I was to be a part of that conversation. The fact that it took nearly a week for this picture to get up here, however, is testament to how eventful my life has been. Eventful in the short term: later that night, our boychild awoke suddenly to an out-of-nowhere seal-bark of a cough, and a near closed-off breathing passage, thanks to extremely rapid onset of croup+stridor. It took less than two minutes to find our ordinary croup interventions ineffectual; thereafter a rapid call to 911, then a tear-filled ambulance trip (his tears; I was summoning whatever calm I could) to Children’s Hospital, then a stay there ’til, oh, about dawn. He’s okay now, but I have another 10-20 grey hairs.

Given my history with that building, I know how lucky I was to have him sleeping peacefully, slung over my shoulder, as I walked back to the car.

Eventful in the long term: life now includes a very big J-O-B that I’ve still not taken the time to tell you about.  Not that I’m wanting to be a tease. It’s just that it’s been rather difficult for me to spend sufficient time for something like an actual thought-out, content-y post (which is what that will take) when I am spending most every spare moment dogpaddling like mad to stay afloat at work.  (I should say, “spare” in the parental sense of the word: i.e., not dedicated to childcare or minimal # hours sleep nightly.)  And yes, of course, I often (usually?)work after kids go to bed; yes, of course, I often (usually?) work on the weekends if ever I have a childcare-free patch of time.

The self-evident observation: all this excess workload fits precisely into the time I used to dedicate to ye olde writing life and the care and feeding of this blog.

Yet and still, I persist in my optimism: I will get a handle on the J-O-B; its exigencies will wane as well as wax; I will eventually forgive myself my imperfections (I will! I will!); balance will find its way back into my life, simply because I will be no good at any one of the several elements of it if I am out of balance in the others.

Sign of any and all of the above: a little more trickling in here. One day. Hope springs internal.

Flash! Church and state are supposed to be separate!

We met the Ancient Mariner at the zoo