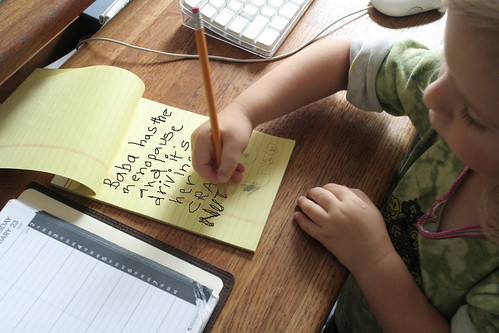 [Non-female reader alert! The word “menstruation” appears no fewer than four times below! You’ve been warned, brother! Skip this now, if you’re a wuss, or read on, if you dare!]

Extree, extree: Baba has The Change o’ Life! It’s the first thing I have ever done earlier than expected.

Now I hope you’ll permit the indulgence of a little backstory.

I didn’t really look up when my period got up and walked away some time ago. And by “some time” I should clarify that I mean over a year. For my entire life, the menstruation came as an ugly shock. Month after month, I’d be all, “Jesus Christ, I’m hemmoraging! Oh. Wait. Yeah. That’s my period.” Like most of my kind, I’m a serial monogamist. True to lesbo form, I’ve been partnered for most of the time since the end of my teen years (with various chunks of action-packed, swinging-single exception). One of the benefits of this has been that I’ve been able to be lazy, and track the rough timing of the menstruation based on its coming X number of days before or after that of my partner. Which partner has consistently been the type of gal who’s had more of a clue than me regarding the timing of her menstruation.

You might guess that this benign neglect of the menstruation just may have a little something to do with my gender identity. Just an eeensy teensy bit.

So when my period stopped a-comin’, I barely noticed it. Never cared for it that much in the first place! My basic position on its disappearance was: good riddance! Poor menstrual cycle knew when it was not wanted! Better luck taking up residence in the bod of some poor hapless young gal all a-twitter, counting the days ’til the onset of her Womanhood! Me, I can do just fine without it!

I forgot there’d be a few other menopausal calling cards. Such as the walking around the house sweating up a storm in a Stanley Kowalski tank-top, smelling more or less like a high school wrestling mat. The other day I pretty much cooked dinner in my skivvies, to the mild amusement of the beloved and the certain shock of our neighbor with the direct view into the one main room in our place (I look a lot more like Ralph Cramden in the skivvies than a Victoria’s Secret model, let’s just say, and I like it that way).

Then there’s the electrical charge, kind of zap kind of thing I was feeling inside my head there for a buncha months. I just quietly thought that I was receiving messages from UFOs, and was simply working on ignoring them. What good are they, after all, if I can’t decipher them? Plus I’m busy enough as it is; I can’t be bothered being the connection point between our world and any others, at least not ’til the kiddles are both in school.

But the thing that got my busy arse over to the OB/GYN is the mood thing. I wasn’t quite planning on that one. I hinted at the direction it tends to take the other day, with this suggestive image. Upon my research perigrinations, I came up short when I ran across the ominous statement, “symptoms of irritability and hot flashes are reported to be more severe among women with small children at home.” Gulp.

Off to the doc I went, which is always fun, since it entails a good excuse for a cable car ride up and down California Street (one of the more picturesque cable car routes in SF). From the smile that crossed her face, I get the idea I might have been one of the few gals the doc’s heard call out “YaHOO!” upon her telling them that, Yes, it’s The Menopause. I think I just liked knowing that, sure, I’m going crazy, but there’s a good reason for it.

Which brings us all up to speed. Lately, instead of spending my smattering of non-childcare moments actually writing the half-dozen un-written relevant, thoughtful essays that keep knocking into each other on the dancefloor of my mind, I have been Googling “holistic menopause treatments.” Because I Googled the drug my doc prescribed, and found the word “horror” and “nightmare” affiliated with it one too many times. Plus a 15,000 signature-strong online petition against the manufacturer. That kinda turned the tide for me.

Ayurvedic panchakarma, here I come! Bring on the accupuncture needles! And to the kids, I says: Hang on tight; it might take Baba a coupla months. The good news: when you go through the hormonal hell that is puberty, I swear I’ll be patient. I swear.