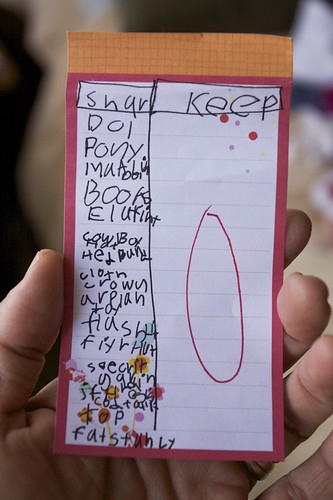 This list didn’t burst fully-formed out of the head of Zeus though.

What happened, in brief, was this: at the end of a long day, the older sister had a big huge honking fit over some special item — a pretty assortment of stickie notepads — that Grandma got her little brother during their weekly day together; she wanted it, its design matched a box she considered special and precious, she couldn’t believe he got it and she didn’t.

Initially the little brother felt defensive/posessive, but when he realized I was going to mediate fairly, and that I utterly supported his special gift staying his, if he chose –particularly given the vast array of items his sister considers special and therefore not sharable — he began simply to marvel at her outburst; older sister continued lunatic fit for a while longer (lunatic fits pretty much always have a deeper root cause, even if the surface trigger may seem compelling); eventually (as is always the case) she became quiet and I sat with them both at the bottom of the steps up to our place. Then the little brother handed his big sister the special giftie his grandma had given him.

(Was that a brief account? No it was not. Still, it felt like it was going to be at the outset.)

“Sweetie,” I said to him, “that’s way too much. You can give her just one or two sheets.”

“No, Baba, I want to.” Â He held it out again, his eyes staying fixed on her the whole time.

What to do? My instinct to block his older sister’s taking advantage of his huge heart was overwhelmed by, well, the hugeness of his heart. And so was his big sister. Â She looked at him, and looked at him, and then basically began to cry even more, but this time, not from a fit of frustration, but more strong feelings than her body/ psyche/ tear ducts could contain. I held her and rocked her, and he continued to watch her, with a mixture of curiosity and tenderness.

I checked with her: Was it that it made her too filled with feeling, his being so generous? and she nodded yes, pink-faced and tears-streaming. Â The more she cried the clearer it was that I didn’t need to intervene and “create” fairness between them, I needed simply to abide with them both long enough for the truth of all the feeling present to play itself out. Â Or at least this is how it worked this afternoon. Â I got no illusions about the permanence of things. Though I do trust in the long-term emergence of truths between people.

After being unable to speak intelligibly, she uttered her first sentence.

Which is how it came to be that she wrote up this huge list, shared items: 15. Kept ones: 0.

Postscript:Â By a stroke of coincidence (or not?) I’m reading this wonderful book, The Sharing Solution, which I gave to my co-housing compatriots during the holidays (their blog is here). Want more extremely inspirational stuff on the same topic, which, in a nutshell, is How We’re Going To Save Ourselves? Check outÂ Shareable, by fellow traveller Jeremy Adam Smith (author of The Daddy Shift, co-author of The Compassionate Instinct). Â Now I’ll share Powell’s links for each of these books (modest commission if you purchase ’em this-a-way).