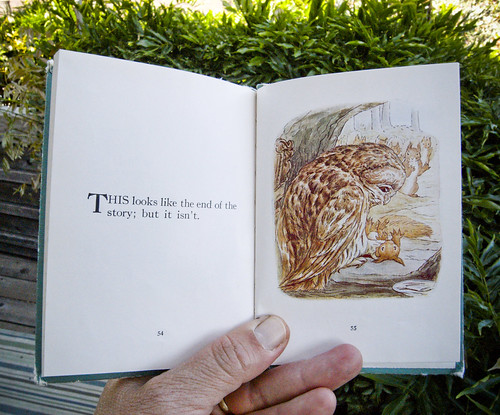 “This looks like the end of the story; but it isn’t.” Old Brown may seem to have Squirrel Nutkin in a deathgrip, but our furry friend is wilier than you might expect.

Today I will be in San Francisco on the steps of the California Supreme Court (and elsewhere), likely apoplectic, but possibly ecstatic; still, likely, apoplectic.  Either way exhausting myself on the babysitter’s time clock.

Whichever the scenario, this deathless moment from Beatrix Potter’s Squirrel Nutkin will suffice as a placeholder.   I know you’ll be getting your news & analysis elsewhere (certainly faster than here!), so I can simply promise to see you again later in the day, with images of the courthouse scene at the least (spoiler alert: it’ll be post #18th of 21).