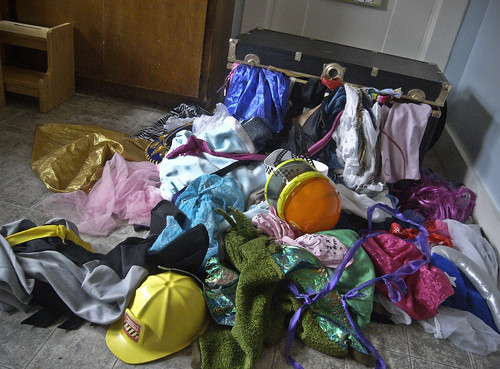 Dress-up box aftermath. When the parents are engrossed in conversation, Things are Bound to Happen.

I don’t yet have a Memorial Day photo of my Pops, WWII – Normandy Beach-landing vet, because his annual BBQ dinner is this evening and I’m hoping to convince him to pose for me in his father’s ship captain hat (Pops made it to LT JG, a “90-day wonder” out of the officer’s training school at Columbia University). Since I’m behind one photo in this photo-a-day month (these durned breaking news events are breaking me!) I may just post it here tonight.

Meanwhile, we’re now counting down the remaing 24 hrs on the Prop 8 CA Supreme Court decision clock. As of this posting, it’s 23 hrs. I’ll be glad for the drama to end, let me tell you. Â There are two kinds of people: the Drama Queens, and the Drama-Averse, and I am the latter (yeah, yeah; my partner’s the former, from an illustrious family of DQs, what can I say. Â We’re well-matched.)

Folks interested in reading some well-informed predictions (insofar as that’s not an oxymoron), you can find some good stuff linked out of this Friday Calitics article by Be_Devine: Melissa Griffin’s “Prop 8 Ruling WIll Come Out Soon! It’s Prediction Time!” which provides a judge-by-judge analysis, and the well-informed and intriguing arguments in the commentary on this Calitics article, “No Prop 8 Decision This Week.”

What I wind up seeing is well-based reasoning for every angle on this whole shebang. Â Which makes me appreciate all the more what my lesbo parent brunch-mates were saying yesterday. Â We called a special brunch, which only I understood as the Deck Chairs on the Titanic Brunch. Most of them were utterly unperturbed, for various different reasons.

Two attorney gals — one of whom works at the California Supreme Court, under Chief Justice Ron George (no, not directly, but you know) — were reminding me that the “suspect classification” aspect of the In re: Marriages ruling was untouched by the proposition, and that is hugely consequential. Any future lawsuits asserting damage to same-sex couples following this proposition’s enactment — and they’re already lined up/in the hopper — will be able to rely on this finding, and that’s HUGE. As George and Ira Gershwin once said, “They can’t take that away from me.” Â They were absolutely certain that the broad swath of findings in that ruling will indeed have paved the way for durable, far-reaching equal rights under the law, for much more than simply marriage. Â That long view is helpful. (For the record they both expcected 8 to be upheld and the June-Nov 08 marriages to also be upheld. Â At which point we merely launch into the next step on this whole lengthy path.)

My anarchist chums had an even longer view. Â They reminded me that, in the deathless words of one, “It’s just a stupid government thing. They rise; they fall; they go away. It’s love that conquers all. Â Isn’t that what you’re always saying?” To which I had to say, “Durned right. Now pass the Mimosa.”